Oregon’s Track Palace Is Off and Running 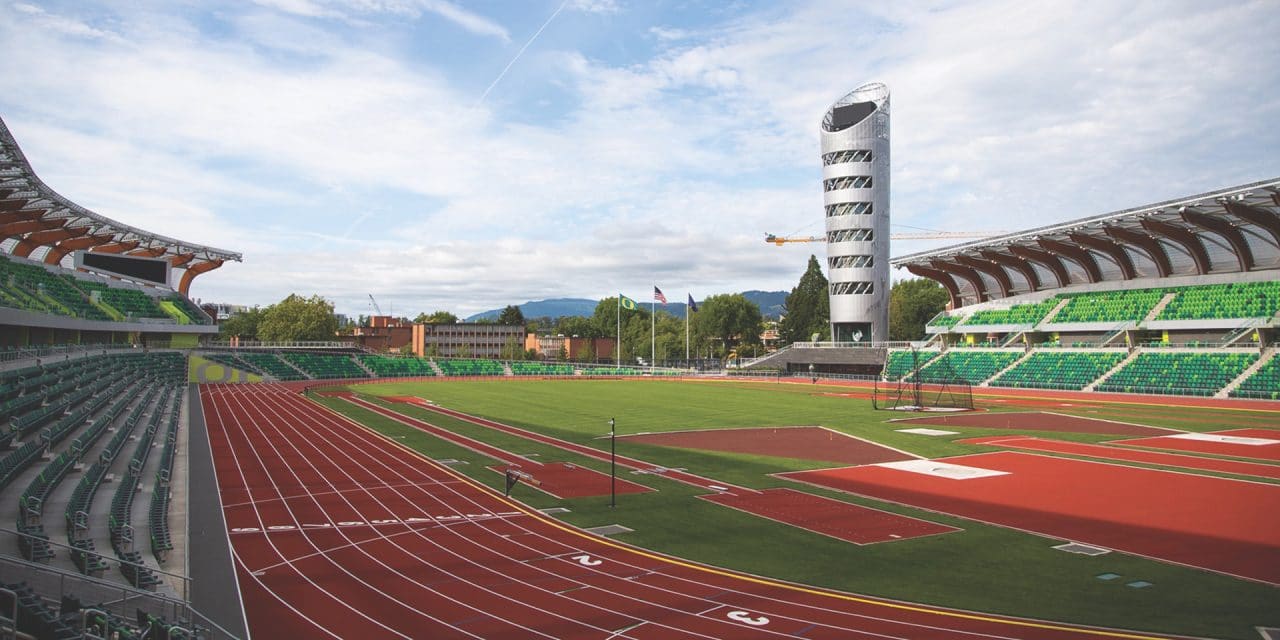 A 10-story tower is the focal point of the $270 million Historic Hayward Field. (Courtesy University of Oregon)

A year after it was poised to become the reimagined U.S. temple of track and field, the $270 million Hayward Field at the University of Oregon in Eugene had its post-pandemic premiere last weekend, albeit with attendance limited to family and friends of athletes and coaches.

The appropriately named Hayward Premiere was the first meet since the 2018 NCAA Championships at what’s now referred to as Historic Hayward Field, which was built in 1919, originally for football. The venue is named for Bill Hayward, the “Grand Old Man” and father of Oregon track and field, who coached the Ducks from 1904 to 1947.

Hayward is home to the annual Prefontaine Classic, named for late Ducks runner Steve Prefontaine, who once held eight U.S. distance records. The track has hosted numerous high-profile events over the decades. In addition to the Hayward Premiere, the Ducks will host four meets at Hayward during the team’s outdoor track and field season.

Designed by SRG Partnership, the venue had been due to make its debut in May 2020 with the Pac-12 Championships and was also set to host the U.S. Olympic Team Trials.

The Ducks used multipurpose indoor athletics facilities on campus and track facilities at area schools during construction, and the university did not host any home meets during the 2019 outdoor track and field season. The 2020 outdoor season was canceled. 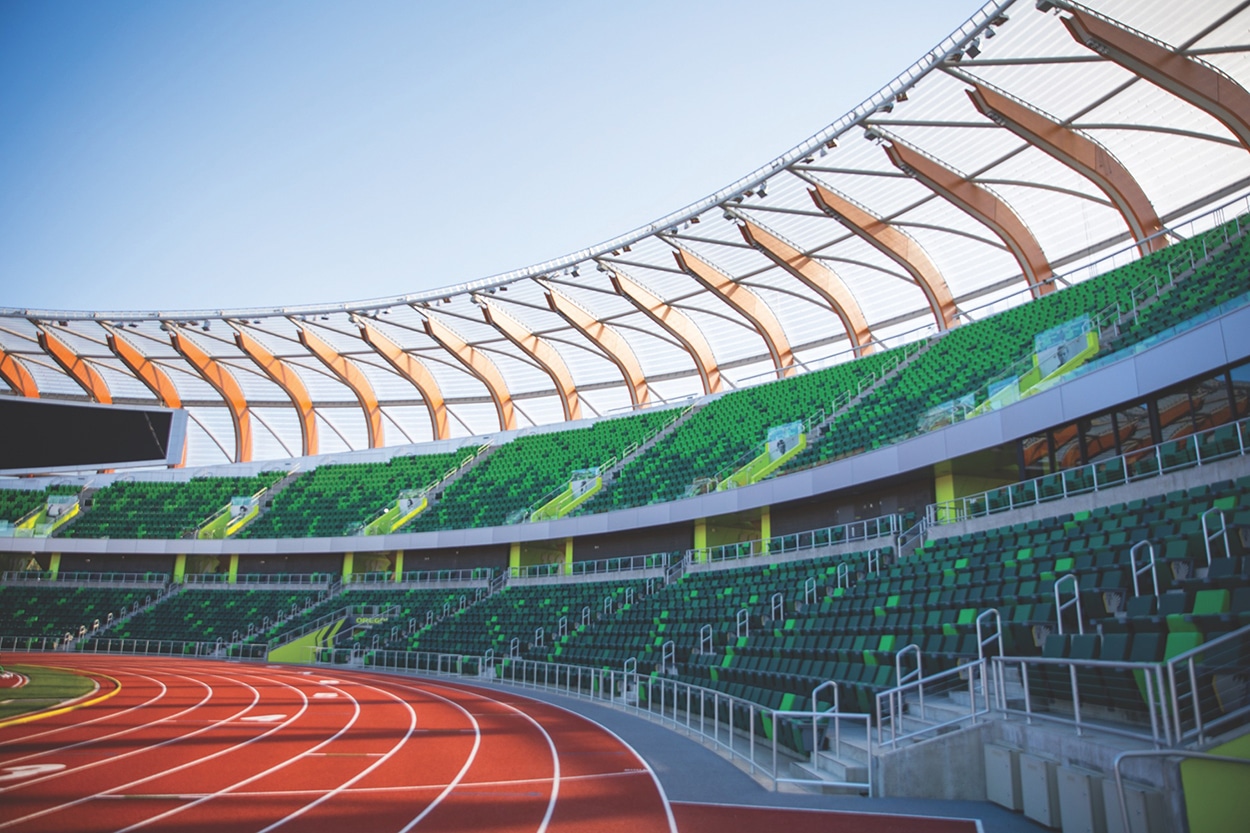 Historic Hayward Field has 12,650 seats but can be expanded to a capacity of 25,000. (Courtesy University of Oregon)

The 2019 Prefontaine Classic, part of the international Diamond League circuit, was held at Stanford’s Cobb Track and Angell Field because work was underway in Eugene. Last year’s Prefontaine was canceled after first being rescheduled from June to October.

Hayward is scheduled to host the 2021 NCAA Championships June 9-12, the 17th time that the event will have been at the location since 1962. It will also welcome the U.S. Olympic Team Trials June 18-27 and this year’s version of the Prefontaine Classic on Aug. 2. The 2021 World Athletic Championships that had been scheduled for Hayward in August will now take place July 15-24, 2022, to avoid conflict with the rescheduled Tokyo Olympics. It will be the first time the World Athletic Championships have been held in the U.S.

Hayward Field was funded by Nike co-founder Phil Knight and his wife, Penny, along with more than 50 other donors, according to a university spokesman, who said no details were being released on the total cost. Hoffman Construction was the general contractor.

Hayward’s capacity can be increased from its permanent 12,650 seats to nearly 25,000 using temporary seating, depending on the event. Series Seating, with offices in Miami and Bogota, Colombia, is the manufacturer.

The stadium features a 10-story tower that’s more than 180 feet tall with a two-story lobby. The crowned tower aligns with the east stands and the lobby is filled with interpretive exhibits, Zack Barnett, a university spokesman, said in an email during the construction phase. There’s also an observation deck, conference rooms, an elevator and a staircase to the top.

Each floor of the tower has a specific use, including security and coaches’ satellite offices.

There is also a 4,000-square-foot museum, Hayward Hall, beneath the east stands.

Architects and designers on the project team examined interactive exhibits around the world to design Hayward Hall, according to Barnett, who said the museum has displays about coaches and athletes and includes seating and signage salvaged from the original venue.

A statue of Bowerman that stood outside Historic Hayward Field now overlooks the track inside the new facility.

“We wanted to respect (the) past and Hayward Field has 100 years of amazing history … but represent it for the future,” said Todd Van Horne, Nike’s creative director and visual branding lead, during a news conference before last weekend’s opening event. “Basically, we’re throwing down the gauntlet for track and field for the next 100 years.”

The project wasn’t without a few hiccups, some weather-related, but managed to stick to its aggressive 22-month timeline.

“This is a very unique facility and much of it is open to all the elements by design, which (made) it harder for the construction team to deal with unforeseen weather conditions over the course of the several-year construction duration,” Barnett said while construction was underway. “The project’s unique and innovative design, including hybrid wood/steel bents, the tower, graphic effects and support structure, create additional challenges. Creating a world-class facility takes amazing time, effort and talent. With projects of this size and scale, there are always challenges, including 18 inches of snow in February 2019, but the design and construction teams (did) an excellent job tackling all of the project challenges.”

“This was a design-build process and a collaborative one from the very beginning,” Jeff Yrazabal, principal at SRG, said at the news conference.

He said the project benefited from SRG’s more than 40-year relationship with Hoffman Construction and over 30 years of working with the university and also noted that the design-build team did extensive research of other tracks.

“We all toured many stadiums around the world and talked to a lot of track and field faithful that know the history and legacy of Hayward Field, and one of the things that always came up was that Oregonians who are connected to track and field, Hayward, and the University of Oregon are unlike any other fan base anywhere in the world because they know track and field, they know the athletes, they’re connected, they understand, they know what a world record pace looks like and that energy is something that we talked about from the very beginning and how can we create that theater for track and field that benefits the athletes by connecting that energy to them throughout the facility,” Yrazabal said.

The stadium will be a delight to track fans. Most of the cushioned 22-inch seats (which replace Historic Hayward’s bleachers) are situated near the finish line. There’s more tread width and leg room, views are unobstructed throughout the asymmetrical bowl and amenities have been significantly upgraded.

“It really was all about intimacy and you feel it when you’re there,” Yrazabal said. “It’s a big stadium but it doesn’t feel like a big stadium. Everyone’s on top of the action and all of that benefits the athletes when they feel that energy and emotion from everyone in the place. So, intimacy, proximity, being on top of the track … feet on the track all the way around and Lane 9 and the connection really drove a lot of it. The continuous roof and the spatial enclosure also is a big deal in creating that intimacy and a sense of place.”

He promised that once operating at full capacity, Hayward Field will be loud.

To that end, there’s a multilane warm-up area beneath the west stands, modern locker rooms, training and rehab areas, a theater-style team meeting room and more.

It all adds up to what Yrazabal referred to as “the theater of track and field” and Hayward Field promises to be one of the best places in the world to experience it, and from any seat in the bowl, he said.

“That’s unlike any facility in the world,” Yrazabal said. “You see premium experiences for a select few in some venues. Here every single person at Hayward Field is going to have an awesome experience.”