Marketing With Purpose — Everyone Can Win 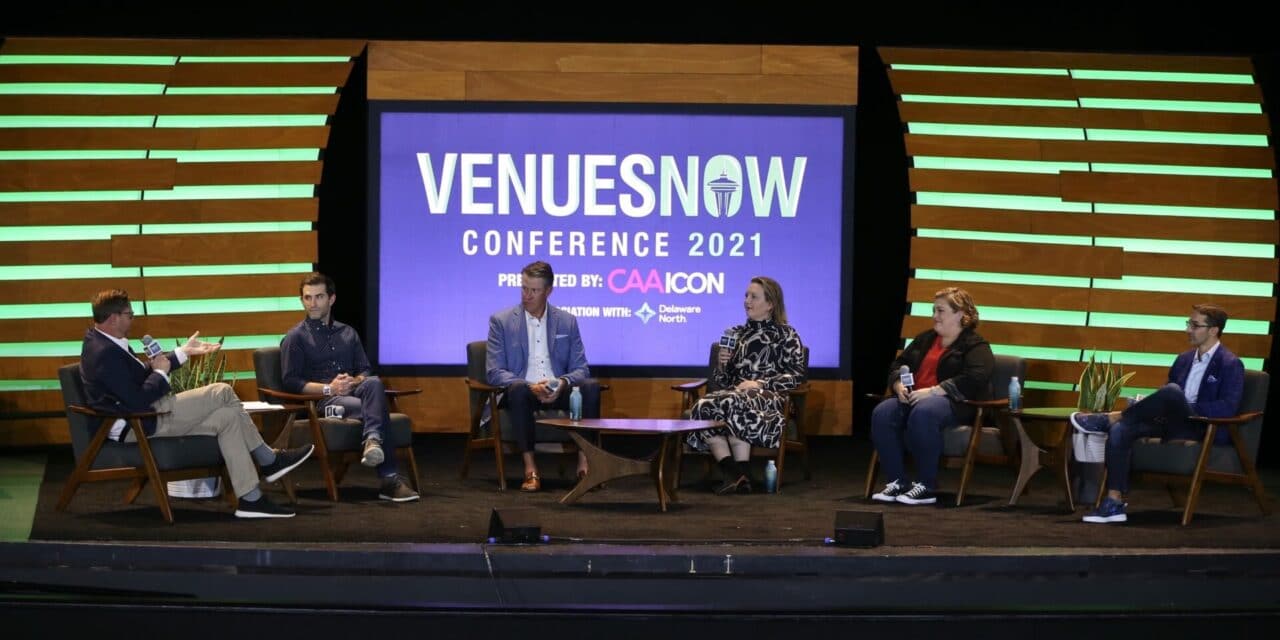 If one were to find an overarching theme at this year’s VenuesNow Conference, most significantly tied to the grand opening of VN parent company Oak View Group’s Climate Pledge Arena, it is the multitude of synergies that can align with the venue’s philanthropic message, in this case sustainability. When done well, that alignment can serve purposes and interests including for business, local communities, fans, consumers and governments while driving a strong altruistic message, increasing the welfare of others and, not insignificantly, revenue — a winning situation for all.

With the use case standing a mere hundred yards away across the Seattle Center’s grassy field in Climate Pledge Arena, the panel’s expert marketers spoke of the myriad benefits philanthropic marketing can offer.

For Tajuddin, putting Amazon’s brand on a building was a first and something her company had never before done. “It was an amazing opportunity to be involved in an historic property that was being remade and reinvigorated right here in Seattle, so that made sense for us to be involved” she said. The idea for Climate Pledge Arena’s naming rights, which was not a branding name but a philanthropic concept, grew from Amazon and Global Optimism’s 2019 pledge to make their business carbon neutral by 2040, 10 years ahead of the Paris Accords. Now, with 200 companies and counting taking the pledge, the venue’s naming rights are already paying dividends while achieving a greater social good.

Dan Fisher’s Ball Corp. is a 140-year-old company best known perhaps for Mason jars, so putting its name on Ball Arena in Denver, home to the NHL’s Colorado Avalanche and the NBA’s Denver Nuggets, offered a number of benefits.

“Two things happened,” he said. “Our friends at Pepsi were moving away from title sponsorship at the same time we were coming out with a new consumer product that we designed specifically for circularity, a 90% recyclable aluminum cup.” The other factor, Fisher said, was that the Denver arena was the first venue where PepsiCo had eliminated its single-use plastic bottles, which allowed for the perfect synergy with its product, also in use at Climate Pledge Arena.

Mesilati represents a Swiss-based financial firm, a third of whose business comes from the U.S. market. With its naming rights sponsorship at OVG’s UBS Arena in Elmont, New York, which will open as the home of the NHL’s Islanders next month, Mesilati spoke on the importance of community and the opportunity hockey offers. This included going to last year’s Islanders playoff games in Tampa and working in the community to help fund youth hockey programs. UBS, she noted, is also working to increase financial literacy and working with five schools in the area.

Justin Toman of PepsiCo spoke of a new initiative called PepsiCo Positive, or Pep+, which he called a “fundamental transformation” with sustainability at its core. “Consumers now more than ever are demanding that brands are accelerating this positive change,” he said. “Pep+ is a transformation in our business, and it’s about how can we fulfill our business objectives but with sustainability at the core and part of everything we do.

“That’s going to span everything from how we procure and source ingredients for our products, beverages and snacks all the way down to how we manufacture, distribute and market — the whole supply chain.”

Toman spoke of its goals to practice sustainable agriculture, become net zero by 2040, net water positive by 2030 and have 50% of the brand’s plastic become recyclable. He also spoke on the importance of having a positive and entertaining sustainability message and cited the brand’s “PepsiCo Trash Talk” campaign featuring NFL players trash-talking on the field followed by an off-field sustainability message.

Crumbine of Impossible Foods spoke of food as a technology and called cows an “outdated technology”— delicious as they may be. This he backed up with data: “It takes 33 grams of getting protein into a cow to get 1 gram of protein out. We’re 10 times more efficient. Three grams in to get 1 gram out for the Impossible Burger,” which is plant-based product.

The marketing head spoke of the massive CO2, land use and water savings using non-meat products offers. He also said that 80% of all U.S. water consumption and half of all land in the U.S. in going to “animal agriculture,” which he called the “single most environmentally destructive industry on the planet.”

Crumbine, however, said the onus isn’t on consumers but on Impossible to “offer equally delicious, equally nutritious (if not more so), and much more sustainable food products, and let the consumers decide and to not be pedantic,” a sentiment all on the panel concurred with.