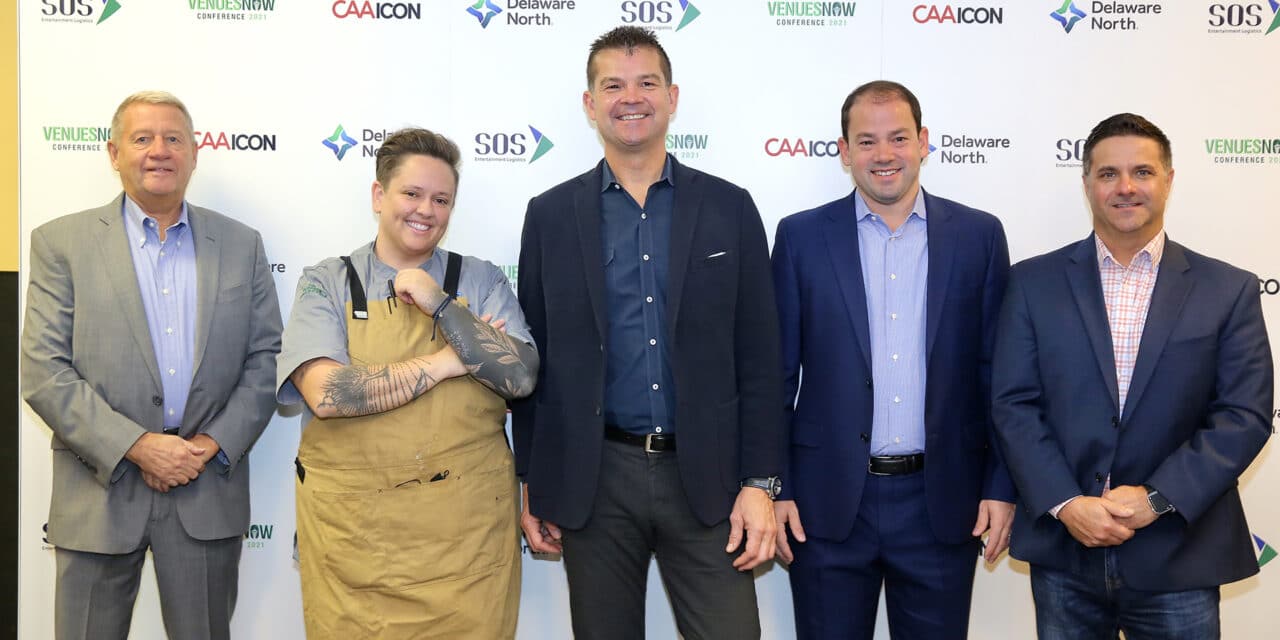 “The Future of Concessions Is High Tech, Sustainable and Increasingly Local,” (from left): moderator Peter Luukko of OVG Facilities, Molly DeMers of Delaware North Sportservice/Climate Pledge Arena, Todd Humphrey of the Seattle Kraken, Jamie Obletz of Delaware North Sportservice, and Wayne Scarsella of Appetize, which was recently acquired by SpotOn.

Sports venue technology has advanced so rapidly over the past few years that facility operators find themselves stopping midstream in development to incorporate the newest gadgets to help streamline the fan experience.

For Oak View Group, that scenario played out for the concessions operation at both Climate Pledge Arena and UBS Arena. Delaware North Sportservice runs the food at both NHL buildings.

“We literally had to retrofit both arenas as they were being designed just to catch up with the technology and the opportunity to serve our customers and be more efficient, ” said Peter Luukko, chairman of OVG Facilities.

“It’s amazing,” Luukko said. “If there was one thing our industry had for over 100 years, it was the belly-up concession stand. That was the one thing that was consistent in our business. That’s changing with the marketplaces that are available to us to do these things.”

Sportservice pioneered the Just Walk Out technology at TD Garden toward the end of the 2021 NHL playoffs and got some experience under its belt for how the frictionless system could be a game changer for general concessions.

“We fine-tuned it to get the model right here in Seattle,” Obletz said.

“Doing cashless, touchless and self-checkout is all part of improving the guest experience and reducing the need for labor, which helps the ecosystem. We can charge tax now in a cashless environment without having to worry about making change,” he said. “It’s all part of taking the long-term view for improving the commercial model.”

For Sportservice, cashless operations have driven per caps up to 30% higher, in part because of customer behavior patterns tied to ease of pay and not having to count cash.

“We’re seeing a big lift from that perspective, which is helping the business,” Obletz said.

Before incorporating the Amazon technology, OVG formed a tech committee more than three years ago to form a comprehensive plan for how the arena could take advantage of all those things in Seattle, a tech-centric city.

Humphrey said the group essentially worked backward to fully understand concessions issues and how they could upgrade the experience to make it easier for patrons to buy food and drink without waiting in lines.

Doing the research, which involved visiting arenas, teams and ticket holders, the committee discovered that the average NHL fan spends 50 minutes to 60 minutes waiting in lines after arriving at the arena.

That adds up to a long time going through multiple lines, first going through security and then scanning tickets, before being able to buy a few beers, Humphrey said.

The Amazon system was the best solution, whether scanning a credit card or registering a palm print for access to the four Just Walk Out locations on the lower and upper concourses.

“We think it’s going to expedite the transaction. It’s cashless and the friction points are not there anymore,” Humphrey said. “The flow of traffic at those locations will improve, especially when people get used to paying with their palm. On a TV timeout, they’re going to be able to zip in, scan in, grab their items and go back to their seats. From our standpoint, it’s using technology for the benefit of the fan and not just to use it.”

In Seattle, sustainability is the overarching theme at an arena striving to be the first certified carbon-neutral venue.

It’s easy to get caught up in all of those catchphrases, but it’s a matter of taking a deeper dive due to “bad decisions” still being made for sourcing local foods, DeMers said.

“We’re growing food inside Climate Pledge Arena such as cured muscle meats and making our own cheese,” she said. “It carries value. The local piece is so important. Eating sustainable is so much more than just those words. You’re going to see that everywhere, whether it’s our marketplaces or the clubs and suites.”