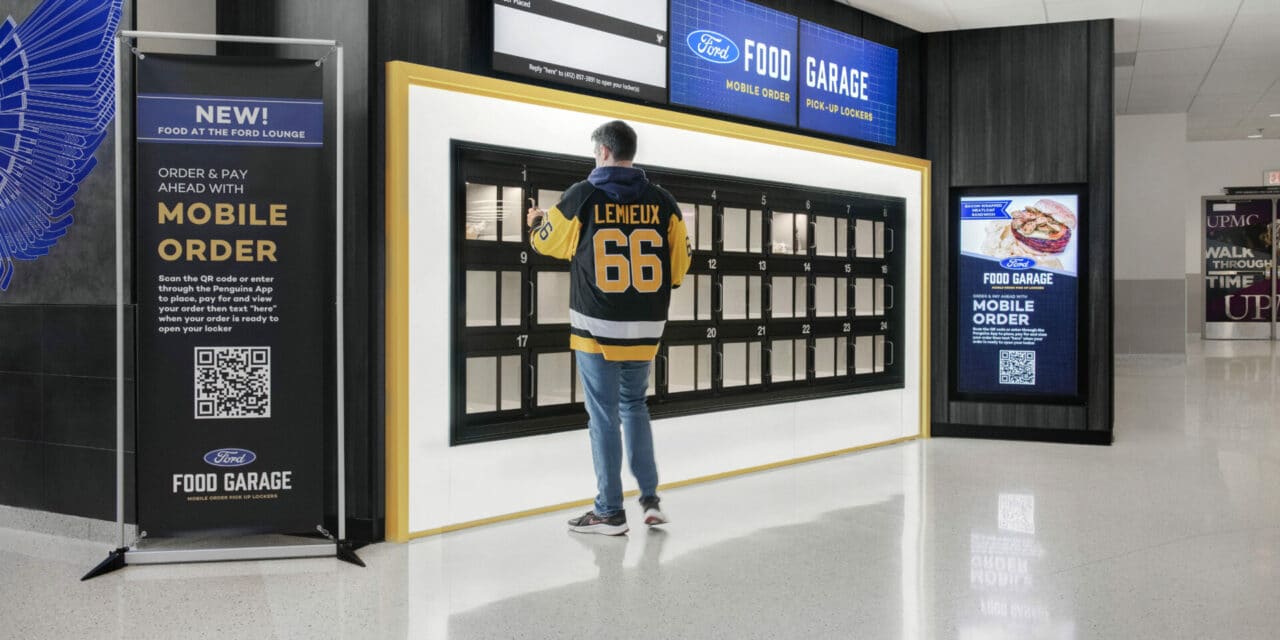 Aramark has doubled down on mobile ordering at PPG Paints Arena, adding food and drink to the locker delivery system to improve speed of service in a frictionless setting.

The concessions piece joins a pilot program in retail, which Aramark also runs at the home of the NHL Pittsburgh Penguins

The add-on, which started in February, is a partnership between the concessionaire, the NHL Pittsburgh Penguins and Cargill, supplier of the lockers under its Chekt brand. Tapin2 mobile technology provides the fulfillment piece.

“With this new adaptation, we wanted to create a fully mobile, touch-free, locker-driven service,” said Alicia Woznicki, vice president of design and development for Aramark Sports and Entertainment.

The lockers are branded as the Ford Food Garage by Section 115 on the main concourse and sit next to the Ford Lounge, a public bar open to all fans that opened in April 2021. The lockers bring incremental points of sale to a space that has no dedicated food service, Woznicki said.

The self-service concept allows fans to order food and drink from their seats through the Penguins’ mobile application. Fans receive a text message when their order is ready for pickup at the 24 dual-compartment, temperature-controlled lockers. Concessions are placed into the locker’s hot or room temperature compartments depending on the item, which is the next step in the technology, Aramark officials said. When fans arrive at the lockers for pickup, they reply with a text saying ‘here’ and their locker pops open.

PPG Paints Arena is at least the third Aramark account to use locker delivery systems as a fan convenience.

Last year, the company launched heated food lockers at Rocket Mortgage FieldHouse, where the NBA Cleveland Cavaliers play. Those lockers are restricted to one temperature-controlled compartment.

In Cleveland, the mobile ordering system, branded as the Fahrenheit Mobile Locker Room after an arena restaurant run by local celebrity chef Rocco Whalen, is connected to SeatGeek’s digital ticket platform. The menu covers about a dozen specialty items typically served in the restaurant. Fans get a text message with a code to punch in on a universal touchpad to open the locker containing their items.

Locker provider Hatco and VenueNext’s mobile platform are part of that system.

The pandemic essentially drove the program at Rocket Mortgage FieldHouse during events with restricted capacity with a high focus on health and safety protocols. The lockers remain in place and have been “relatively consistent” with the arena’s reopening, said Cavaliers spokeswoman Phyllis Salem.

“We are finding fans who are looking for a higher-end food experience take advantage of this offering,” she said.

Industry consultants question the effectiveness of the food locker systems compared with the Amazon and Zippin systems.

“We don’t know the problem it’s solving and it’s not gaining (much) traction even with the pandemic,” said Mike Plutino, founder and CEO of Food Service Matters. “We’ve watched order/pickup fizzle again with two to three percent adoption.”

Aramark officials recognize the low adoption rate with mobile ordering, a trend over the past 15 years since the technology emerged at arenas and stadiums. Woznicki cites several factors, including “shoe-horning” mobile into locations that aren’t built for that mode of service in addition to the time required to modify fan behavior.

“We have seen bright spots where we create a highly desirable fan experience around mobile ordering,” she said. “We hope this activation checks that box. Mobile is just one tool … and one we hope will continue to gain traction as more locations are designed for true mobile ordering and pickup service.”

The sponsorship element for mobile ordering is another trend to watch. Ford putting its name on the food lockers in Pittsburgh is one example. In general, sponsorships are driving a lot of food service technology at sports venues and there’s been an uptick on that piece tied to point-of-sale systems, Plutino said.

“Point-of-sale providers have all become processing companies,” he said. “‘They want the volume of credit card (transactions). It’s a big shift, because typically, the decision wasn’t made at the sponsorship door but it’s becoming more influenced by it. They have a target now that they didn’t capitalize on before.”

Climate Pledge Arena, where Amazon holds naming rights to the NHL Seattle Kraken’s facility, and UBS Arena in New York both use Just Walk Out technology in conjunction with Sportservice, their food provider.

The drawback to Amazon and Zippin is the investment, which can run $250,000 to $300,000 per concession location in a sports venue, plus transaction fees, Plutino said.

“It’s hefty,” Plutino said. “Everyone believes in those marketplace concepts. We’re still hoping Climate Pledge Arena will be the entry to start bringing that (cost) down to a place where people can see an ROI on it.”