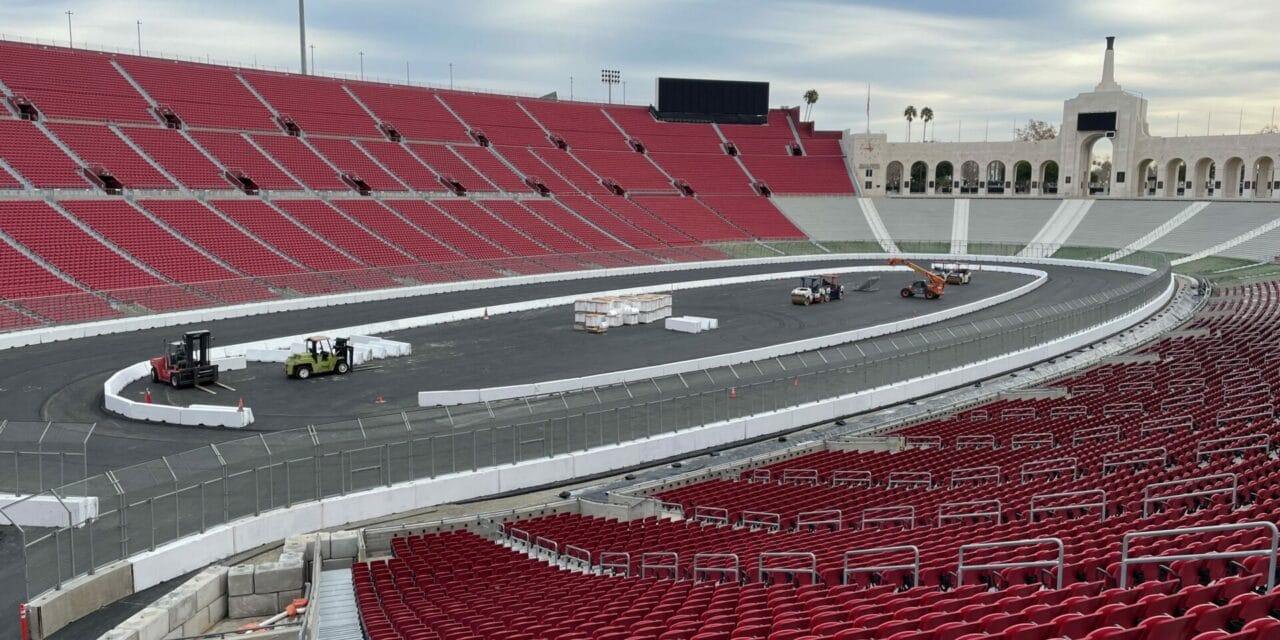 Installation of a quarter-mile stock car track inside Los Angeles Memorial Coliseum is ahead of schedule. (Courtesy venue)

More than 50,000 expected for Feb. 6 Busch Light Clash at the Coliseum

The transformation of venerable Los Angeles Memorial Coliseum, site of two Olympics and the Super Bowl, into a temporary auto raceway continues this week as the Feb. 6 Busch Light Clash at the Coliseum approaches.

The process for building the quarter-mile track is ahead of schedule, according to Joe Furin, the coliseum’s general manager.

“The foundation is in. The asphalt’s curing,” he said.  “They’ve got about a 10-day window to get it out because we have to put the field back in for our first rugby game.”

The coliseum is home to Major League Rugby’s LA Giltinis, as well as University of Southern California football.

For the NASCAR race, tickets start at $65 for adults, $10 for kids 12 and under. Furin said the event is tracking to draw a capacity crowd of more than 50,000 race fans to the stadium, which completed major renovations in 2019.

“Conversations to host the event go back about two years, but stalled a bit during the pandemic, then picked back up over the summer,” he said. “NASCAR made the decision in August to have the event in 2022, rather than push it further out.”

Furin says he’s as excited about the event as any he’s been involved with over his 37 years in facility management.

“And this goes back to the Rolling Stones’ (1989/90) Steel Wheels tour, the Rams excitement, USC football,” he told VenuesNow. “Stock cars running four wide on a quarter-mile track inside the Coliseum … it’s going to be so cool, I can’t wait for it.”

Furin started his career at the Coliseum and adjacent Los Angeles Memorial Sports Arena in the 1980s when Mickey Thompson’s Entertainment Group was producing stadium motorsports events at the Coliseum and Anaheim Stadium (now Angel Stadium of Anaheim).

“There is something about watching racing in a stadium that is really cool,” he said. “Maybe mentally you think of the stadium as a football venue, (but) you come in and see a track in there.”

The cost of installation and removal of the track is reported to be around $1 million.

Unlike those Mickey Thompson events, there will be no dirt course and riders going into the coliseum’s iconic peristyle and jumping down the steps below.

The field  has been covered with a protective sheeting to shield it from the fill, base material and asphalt that will form the track surface.

The Busch Light Clash at the Coliseum is the first race of the 2022 NASCAR Cup Series season.

Qualifying begins on Feb. 5. A NASCAR Fan Fest, included in the ticket price, will be open both Feb. 5 and on race day.

Pitbull is scheduled to perform prior to the big race, which will be broadcast on Fox.

The race was the brainchild of Ben Kennedy, NASCAR ‘s senior vice president of strategy and innovation, according to Nascar.com. 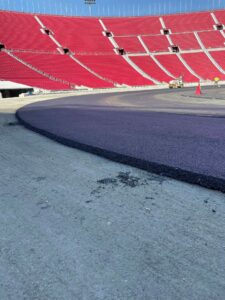 Furin said the race is a throwback to NASCAR’s early days. The coliseum was suggested as a suitable venue by Dave Allen, who runs Auto Club Speedway in Fontana, California, home of a NASCAR Cup series event, and with whom Furin has a relationship.

Installation of the track began a few days after the benefit concert featuring Ye and Drake at the coliseum on Dec. 9.

“We allowed them to come in as early as possible right after the Ye/Drake concert,” Furin said. “It’s the first time building the track, so we gave them a long window to work it through.”