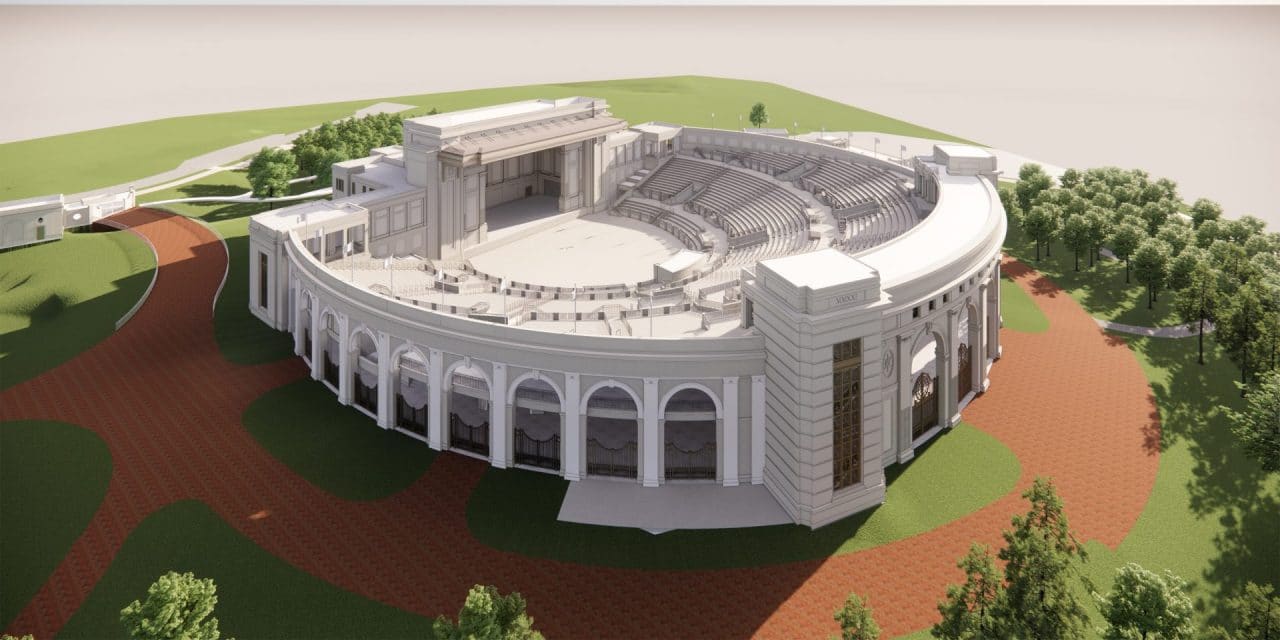 The new amphitheater, seen in a rendering, is scheduled to open in April 2022. (David M. Schwarz Architects)

Mumford & Sons’ Ben Lovett has seen a lot of U.S. cities and towns and the spaces in between, and what he sees in Huntsville, Alabama, is a perfect spot for a new 8,000-seat amphitheater, the first for the city and his company Venue Group.

Construction has started on the David M. Schwarz-designed, city-owned shed, which is targeted for an April 2022 opening. Robins & Morton is the general contractor. The $40 million amphitheater will be managed by Huntsville Venue Group under the leadership of President Ryan Murphy, former general manager of the St. Augustine (Florida) Amphitheatre.

“The better question is, ‘Why not Huntsville,’ said Lovett, a founding member of the British folk rock act.

“It’s like from touring with my band over the years,” he said. “Sometimes we get ourselves into a little bit of a close-minded attitude when it comes to live venues where we just assume that the best and the greatest need to live in the cities with the largest populations. Actually, sometimes making things like this happen, the aspirational and kind of building the dream which we’ve managed to do here with the city of Huntsville, would be very difficult to pull off in some of the more established markets.”

That there’s more to the U.S. than what you will find on the coasts or in the major population centers is not lost on Lovett, but Hunstville is hardly a sleepy backwater burg. It’s situated between Nashville and Atlanta. The city is home to NASA’s Marshall Space Flight Center (hence the nickname “Rocket City”).

The FBI’s second headquarters is under construction at the U.S. Army’s Redstone Arsenal just outside the city. There’s a new rocket engine production facility for Jeff Bezos’ Blue Origin space venture, an expanding Facebook data center and a Mazda Toyota Manufacturing facility that’s due to open this year.

The U.K.-based company Sound Diplomacy, which researches ways that cities can use music, arts and cultural offerings to bring economic and social growth, did a music audit in Huntsville, whose leaders were looking at ways to elevate what’s available to residents in a city with strong per capita income and plenty of outdoor recreation options, Murphy said.

The city had made bringing a world-class performance venue to Huntsville a part of its Big Picture master plan. Lovett, who in the last five years helped launch the 600-capacity venue Lafayette and the 320-capacity Omeara, both in London, formed Venue Group along with his brother Greg. The  company made its pitch to help develop and operate the shed, receiving city approval in 2019.

“It’s emerging in a way that’s unprecedented,” Murphy said of Huntsville. “The financial stability of the city has been growing. What has happened is, as you have all these different companies looking to move to Huntsville, they’re also looking to recruit and bring in younger engineers and their families.”

“What the city saw was all these younger engineers coming here and and getting paid decent wages,” he said. “Huntsville is checking all these boxes. The one box they aren’t checking is the quality-of-life aspect holistically. Culturally, it’s been a little sleepier than it could have been.”

City leaders envision the amphitheater helping to make Huntsville a place that major acts include on their routes.

The Huntsville City Council in October authorized the city’s Public Building Authority to move into the classical-style project’s building phase. The city is funding construction in a new city park and is envisioned to have year-round access tied to farmers markets, arts festivals and other events.

Lovett says he wants the project to have food and beverage offerings that go beyond typical venue fare by bringing in regional chefs and local vendors in a food village-type concept.

The venue is open to all promoters, Lovett said.

“We will encourage third-party artists and promoters to come into the room and we’re not going to promote the shows,” he said. “It’s important to get out of the way of that. The revenue streams have got very confused over the last 20 years. We’re hoping to make that a little bit more transparent and detangled.”READ ON
Cultivating the grassroots: Why Ben Lovett is helping launch a venue in Space City