Billy Bob’s Texas Takes a Breath for Its 40th Anniversary 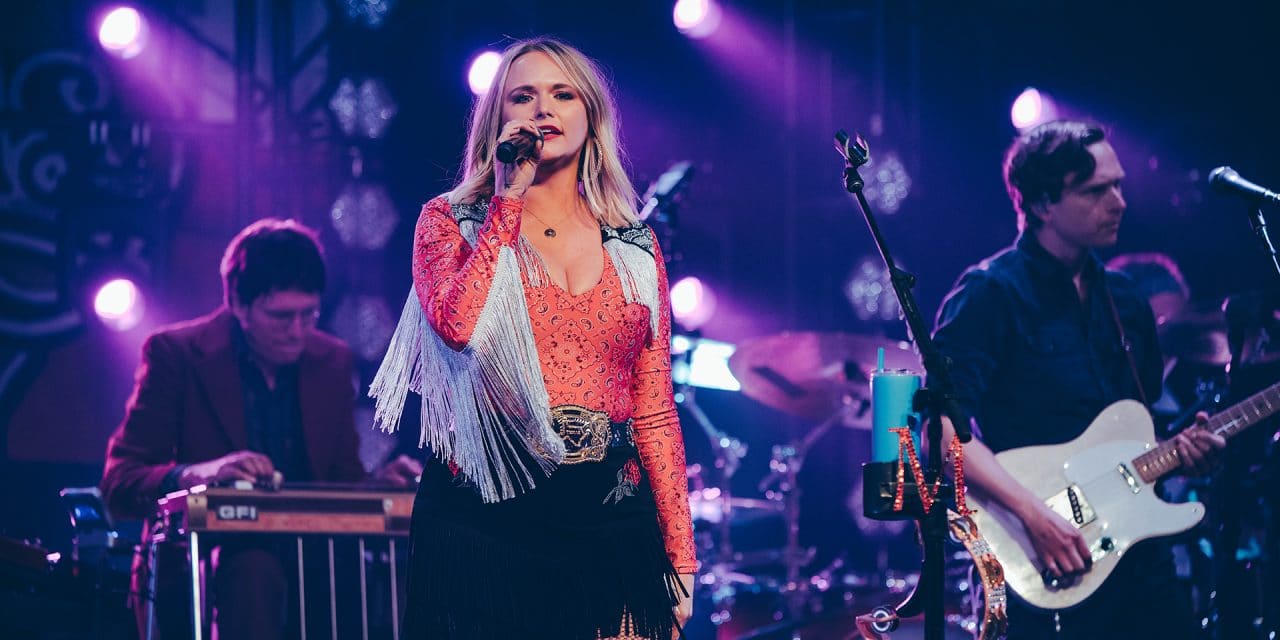 BACK AND BOLD: Miranda Lambert performs during a three-night run at Billy Bob’s Texas in late April. (Nikki Phillips)

Marty Travis was making plans for the 40th anniversary of Billy Bob’s Texas, the 6,000-capacity Fort Worth institution, long before the coronavirus pandemic.

“The Gatlin Brothers were the first band to ever play in Billy Bob’s, April 1, ’81,” said Travis, the venue’s general manager. “Two years ago, way before the pandemic started, I reached out to the agent for the Gatlins, and I said, ‘Hey, I gotta get this show. I can’t let Larry (Gatlin) get out of the country or be on vacation.’”

The anniversary show went off “with a bunch of pomp and circumstance” on April 1, 2021, according to Travis, but likely wasn’t what any of the parties had in mind when the idea originated. Though Texas lifted coronavirus-related capacity restrictions and mask mandates in early March, Billy Bob’s is still operating at around half-capacity – 3,000, give or take a couple hundred, depending on the artist – and observing other COVID-era safety protocols, from temperature checks to an abundance of hand sanitizer.

As the live industry comes back online, Travis and the rest of the Billy Bob’s team has charted a tricky middle path. On one side, the venues, promoters, and artists who still deem the pandemic too dangerous to play gigs indoors or tour at all; on the other side, fans, state and local governments, and performers who find dropping case rates and positive vaccination news compelling evidence to return to business and put an end to prolonged economic calamity. The live industry has taken notice: Major artists booked in April and May include Miranda Lambert, Thomas Rhett, Midland, Jon Pardi, and Hank Williams Jr.

For Billy Bob’s, the start of the pandemic resembled most other venues. The club shut down along with the rest of the country in mid-March 2020, and relied on Payroll Protection Program funding to keep its staff employed. When that ran out, Travis had to furlough 260 of 270 workers – “When we had to furlough people, I cried a lot, because this is my Billy Bob’s family,” he said – and remaining staff took 30% pay cuts to keep business going.

Once the most restrictive period of sheltering in place ended, Billy Bob’s began staging livestreaming events for charity, with beneficiaries including the United Way Tarrant County Creative Industry Relief Fund, the Texas FFA Association, and community radio station KNON. Billy Bob’s hosted five blood drives and even brought in local chefs for a virtual cooking show. (“We got tired of all the virtual concerts because everybody was doing them,” Travis said.)

“We were able to figure out how we could do it on a very small level of work at a very high payoff on the back,” Travis said. “We knew that Billy Bob’s had a social responsibility to continue to be relevant and to be productive on the other side. It kept us working, it kept us in contact with people, it kept people that that we had working working.”

Those words rang truer as summer turned to fall, because Billy Bob’s trajectory diverged from many venues throughout the country.

The gradual return has been challenging for Billy Bob’s, as the venue has attempted to balance considerable safety protocols with government and community pressure and the realities of pandemic-era touring.

“When we did bring people back and we did 1,500, we did it and it was difficult and it sucked,” Travis said. “But we also were very cognizant of how the guest experience looked.”

In other words, while patrons are greeted by a $20,000 thermal camera to detect those running temperatures and can’t miss the 36 hand sanitizing stations erected throughout the club, Billy Bob’s has still strived to deliver quality to its guests.

“We’re not going to create an experience for somebody that’s not A+ and charge them for it if we don’t think we can provide it for them,” Travis said. “My daddy always said, ‘You can shear a sheep a million times; you can only skin it once.’ I don’t want people to think they came in here and got skinned. I want them to think they came and had a good time at a fair price.”

That price, while fair, given costly COVID-era infrastructure and reduced capacity, is higher than longtime Billy Bob’s patrons are accustomed to. Travis’ pursuit of high-end talent – to honor the venue’s 40th anniversary, but also to make reduced-capacity shows worthwhile – has exacerbated sticker shock for tickets now often ranging from $50 to $200.

“If it was a $16 ticket, who gives a shit? Who cares?” Travis said. “But if we got somebody making a $50 investment – or $100 investment, when you multiply it times two – we don’t want people to think that they got a bad experience. We just want to make sure that people have the best experience, the best bang for their buck that’s fair for the artist, fair for the staff, fair for the guest.”

Masks have been a sticking point. For the first several months after it reopened, Billy Bob’s mandated masks in compliance with restrictions from the Texas government. Resistance was considerable, particularly during 10 nights in early December, when Billy Bob’s welcomed guests for National Finals Rodeo watch parties followed by concerts featuring the likes of Travis Tritt, The Bellamy Brothers, Stoney Larue, Cody Johnson, Justin Moore, Pat Green, and Wade Bowen.
“That was really a challenge, because some cowboys did not want to wear masks,” recalled Travis, citing the venue’s compliance with municipal, county, and state regulations. 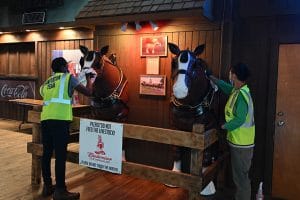 HORSE SENSE: Everything and everyone gets a rubdown as part of COVID-era protocols at Billy Bob’s Texas. (Courtesy venue)

To help the bitter pill go down easier, Travis and Billy Bob’s staff explained to patrons that wearing masks allowed the venue to remain open, and thus saved jobs and helped local business.

Then, with a sigh: “We did a great job at it, but it sucked. I ain’t gonna lie to you. It sucked.”
Despite the Texas government’s elimination of its mask mandate, Billy Bob’s continues to recommend face coverings. Its online channels feature a stark red image with a mask-wearing, cowboy-hat-wearing silhouette and the three-word message “IT’S YOUR CHOICE.” But it’s a choice, not a requirement.

“When they said we could take masks off, it was a game changer for us,” Travis said. “I’m a firm believer in giving people choices. We’ve had a long conversation with our staff about harassment. If somebody chooses to continue to wear a mask, thank them! Tell them ‘thank you’ for being responsible. And if somebody doesn’t wear a mask, don’t reprimand them because they don’t believe what you believe. They have made a choice for what they want to do in their life.”

Travis assuaged concerns about mask wearing by pointing to the venue’s reduced capacities.

“We put 6,000 in there, we’re not giving anybody a choice” to social distance, he said. “We’re cramming them in like sardines. If we put 3,000 in there, there’s plenty of room to go to Billy Bob’s and watch a show and not be next to somebody if you don’t want to be.”

Despite its obstacles, the pandemic has also provided some benefits for Travis and Billy Bob’s. Like other venues, it made substantial facility improvements during its downtime, including a “six-figure renovation” to one restroom and a deep cleaning of infrastructure from exposed pipes to air conditioning vents.

But more importantly, high-end prices for the likes of Lambert and Rhett proved to Travis that pricier acts are financially viable for Billy Bob’s, even after the pandemic.

“I can’t do them all the time, I’ll break the market,” he said. “But if I do a monster show once a month, I think we could pull it off.”

Travis also touted Billy Bob’s as being “so far ahead of the Live Nations and the AEGs and the bigger facilities,” because the venue has already undergone the “growing pains” that accompany returning after the pandemic.

Travis, who has been with Billy Bob’s for a quarter-century, anxiously awaits the return of full-capacity shows, but admitted pandemic-era programming has had its perks.