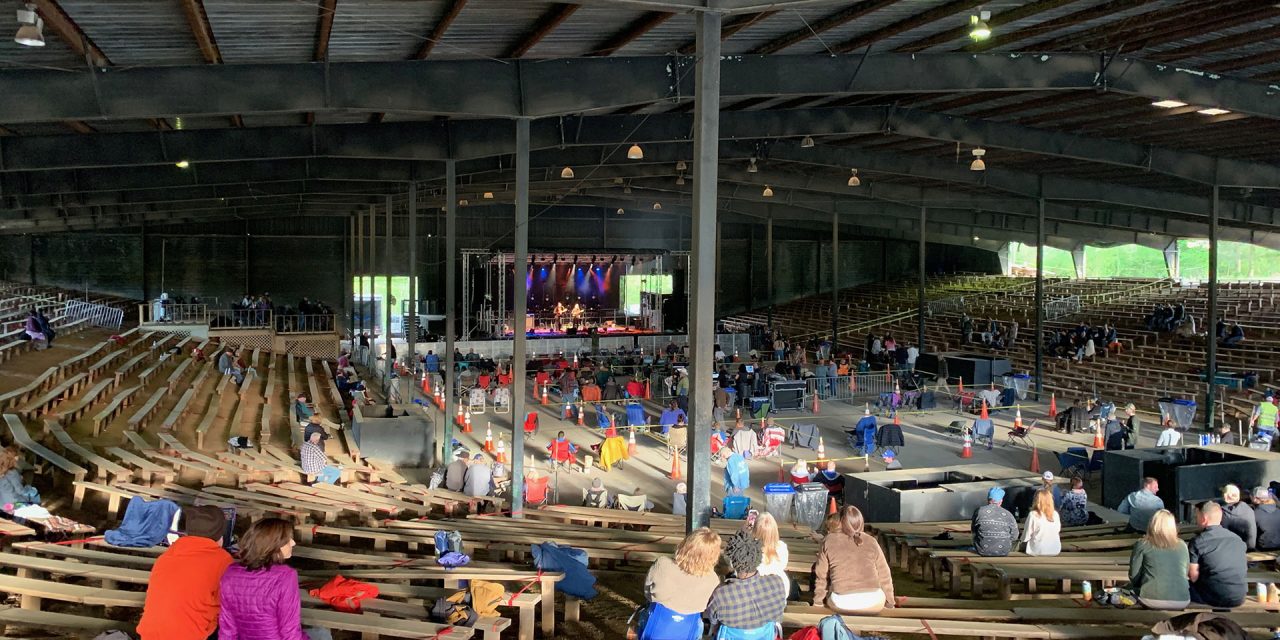 HARMONY, N.C. — Concert producer Bob Robertson plans to upgrade a historic live performance venue that once drew tens of thousands of patrons and pickers to the North Carolina Piedmont.

The first step was booking some live music and getting concertgoers reaccustomed to the facility itself, part of VanHoy Farms, a 107-acre property 60 miles north of Charlotte. The centerpiece is H.P. VanHoy Memorial Coliseum, a rustic open-air arena with a metal roof, wood bench seating set on a hard-dirt bowl, and a concrete event floor.

The shows were April 23-24 at the coliseum, named for the man who started the Old Time Fiddlers’ Convention in 1924 at a schoolhouse in Union Grove, before relocating the April event a few miles down the road to his family farm in 1970.

The Stringdusters were originally scheduled to perform in a field at the farm before getting moved to the 8,000-capacity coliseum because of the threat of rain over the weekend. The transition involved moving the outdoor rental stage inside the covered venue in front of a permanent stage. 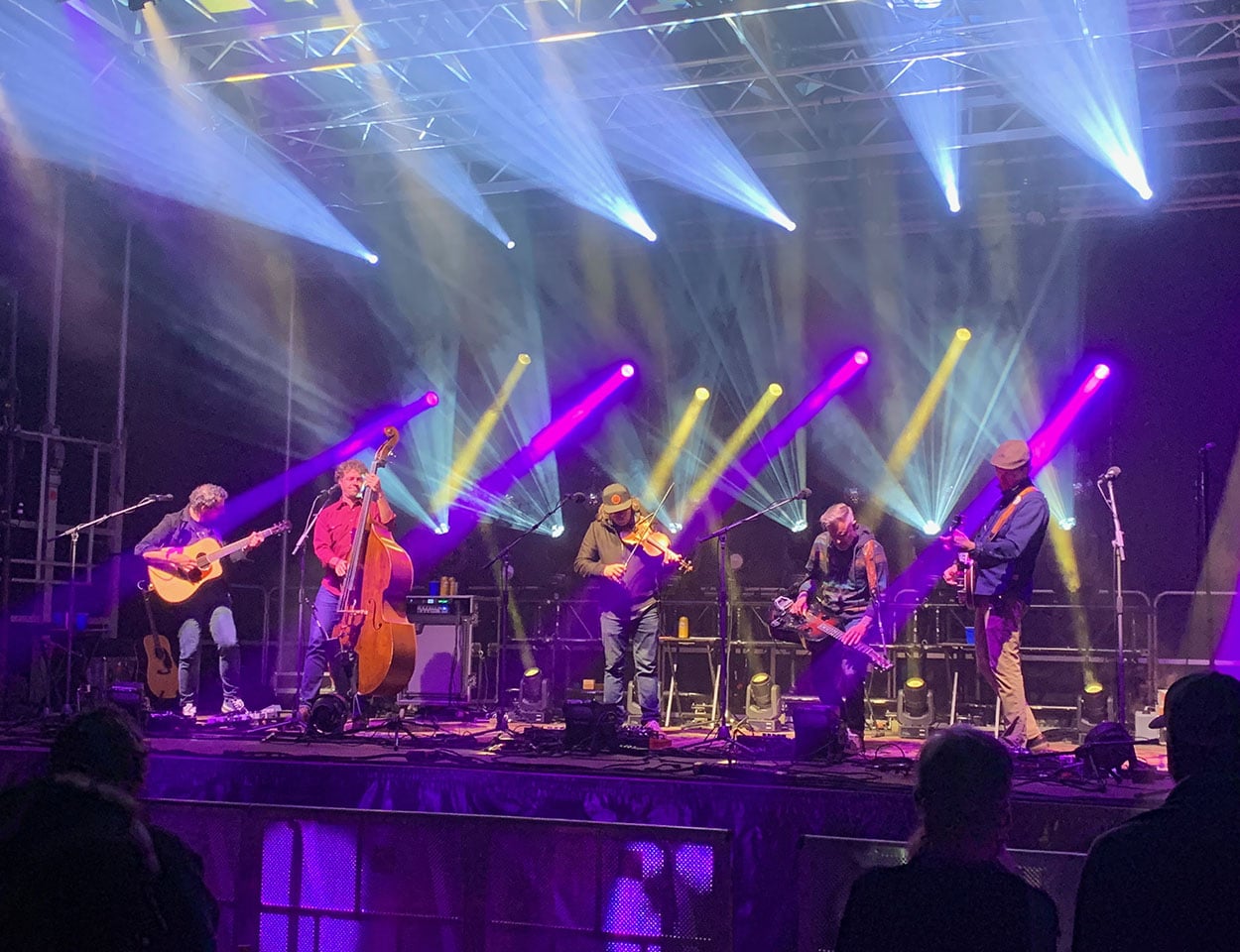 The task was completed with inches to spare, Robertson said.

Because the concert was planned as a socially distanced event, the promoter had to convert outdoor pod seating sold at three price points to the coliseum’s wood benches, a haphazard layout with colored tape marking the seats.

Many folks that brought lawn chairs thinking Friday’s show was going to be outdoors set them up on the bench seats, but it didn’t really matter. The venue was short of capacity for the first night of the Stringdusters. The band supplied the stellar lighting system.

All told, Mtn Roots Management broke even on the two shows, Robertson said.

“For the first time out and the challenges we had moving it inside, we were happy to get where we were,” he said. “The weather hurt us (Saturday), but it was a successful event. No one was hurt and the music was incredible. Everybody did pretty good in following the COVID protocols and being safe and respecting other people’s spaces.”

In addition to weather conditions, Robertson had to contend with the residuals from a previous event. The week before the concert, the coliseum held a Mexican rodeo with bull riding and live music.

The bull riding ring was “full of sand and cattle gates and all kinds of stuff,” Robertson said. “On Tuesday afternoon (three days before the first show) we realized the weather forecast wasn’t going to change in our favor and off we went to start the conversion. It was a big undertaking and we worked pretty much nonstop for 48 hours.”

For Robertson, it’s just another day in the life of an event promoter.

He’s produced music festivals since 1995, including Smilefest, which ran from 2001 to 2004 at VanHoy Farms. Focusing on bluegrass and roots music, it drew national acts such as Bela Fleck, Warren Haynes, Leftover Salmon, Sam Bush, Vassar Clements and David Grisman.

Early in his career, Robertson worked with major festival producers AC Entertainment and CID Entertainment, and he still works with CID to help run Mexico resort vacation events during the winter months with Dave Matthews Band, Dead & Company and Phish.

Smilefest drew crowds of 5,000 over its four-year run before Robertson decided to focus more on event operations and logistics instead of producing and marketing festivals. Robertson said that he’s never had the deep pockets that bigger festival promoters do but that they keep calling him to help run their events.

“We do more boots-on-the-ground stuff, building the sites, layout, operations, shuttle and people moving,” he said. “At Coachella, we managed all the shuttles at the hotels for 60,000 people. We’re the guys that put up the fence and make sure the portable toilets are in the right place.”

Coming out of the pandemic and the national shutdown of live entertainment, Robertson sees potential for reviving VanHoy Farms and booking monthly concerts at the site. Casey VanHoy, grandson of H.P. VanHoy, is a partner with Mtn Roots Management as they plan to upgrade the property.

Robertson, the son of a Quaker preacher, graduated from high school in Mount Airy, the hometown of actor Andy Griffith. He lived in Virginia for a few years, where he established his business, before moving back to North Carolina. Now, he’s looking for warehouse space with a focus on updating VanHoy Farms for more concerts.

Years ago, the festival scene kept the farm busy with events, but things dried up over the past decade. The last Fiddlers’ Convention took place in 2012, according to a story in the Hickory Record. In its heyday, it drew up to 200,000, according to Robertson.

“Now feels like the time is right to bring VanHoy back and do some things,” Robertson said. “I’m an old hippie. I believe in the energy and there’s great energy in that property. You can really feel it when you walk on it.”

Mtn Roots Management plans to book up to three more concerts at VanHoy Farms this year before improving the coliseum for 2022 with new metal bench seating. The investment will run $150,000 to $200,000, Robertson said.

Camping has been part of the festival experience at the farm, and there are plans to upgrade that piece as well with more permanent structures such as picnic tables and firepits, he said.

Robertson said it has been a challenge to book national acts this year, considering that many artists have contracts to honor for events postponed from 2020, which prevents them from playing VanHoy Farms.

In addition, Mtn Roots Management must contend with radius clauses tied to regional festivals running later this year coming out of COVID. Plus, some festivals are still up in the air as to whether those events will take place.

“Artists like to route shows, and for us, if you’re working with a band, they need to line up other things so they’re not just playing one show,” Robertson said. “Otherwise, you’re paying them high dollar.”

He said, “I see us having a few more shows this year and in 2022, laying out a lineup that everybody will say, ‘Holy cow, this is amazing.’ That’s our goal. We’re not in a rush; we want to have it done well. This property has so much infrastructure and so many great things to tap into.”