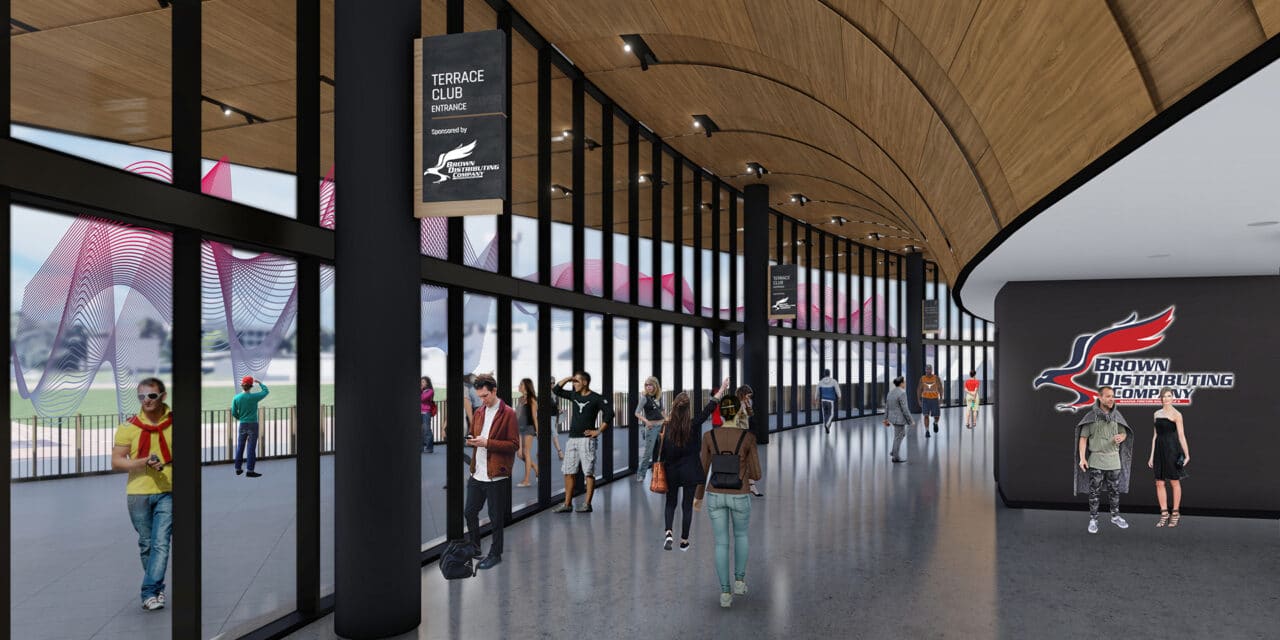 Brown Distributing will have naming rights to a terrace on the arena’s west side, shown in a rendering. (Courtesy Oak View Group)

Moody Center, the University of Texas’ new arena opening next spring, will boast one of the strongest beer selections in college sports after Oak View Group signed Brown Distributing, an Austin firm, to a founding partnership.

OVG, the private developer, marketer and operator of the 15,000-seat arena, signed a 10-year deal with the beer distributor. Brown Distributing, a longtime booster of Texas Longhorns athletics, carries about 50 brands of beer after expanding its reach years ago in a thriving craft beer market.

The founding partnership is set to be announced Tuesday in Austin as part of an event hosted by Brown Distributing.

The deal extends to naming rights for the Brown Distributing Texas Terrace, a 9,000-square-foot destination in the upper deck on the arena’s west side, overlooking the plaza at Moody Center. The indoor-outdoor space accommodates about 1,000 people.

Brown Distributing has been in business since 1962 and was a sponsor of Texas athletics for more than 45 years, said Laurie Brown, vice president of the company and daughter of J. Dan Brown, founder of the firm.

“We were the athletic sponsor of UT until seven years ago when MillerCoors got the deal,” she said.

Committing as a founding partner and obtaining naming rights to a piece of a building, as it is doing at Moody Center, is a first for the distributorship as a whole, Laurie Brown said.

(Separately, J. Dan Brown, a former SMU baseball player, has his name on player development centers for baseball at Texas, and at Texas State as part of a $62 million arena renovation in San Marcos).

“The people at UT are great to work with,” Brown said. “We joke about it … we were there when you couldn’t give (basketball) tickets away. But we certainly understand the value of UT in general. In Austin, that’s the deal.”

Brown Distributing’s deal is separate from the beer sponsorships the Big 12 school has with MillerCoors, plus Constellation Brands, distributor of Corona and Modelo. Those partnerships run through Learfield IMG, Texas athletics’ multimedia rights holder, and focus mostly on college football, Shell said.

“The lines of separation are very clear,” he said. “(Brown Distributing is) not a partner of the UT basketball team(s) or the athletic department.”

Still, it was a complex deal to negotiate considering the multiple beer sponsors on campus, according to Shell.

“It’s college and beer and a different partner than the athletic department,” he said. “It’s not really the college, it’s the arena, and what does that mean and what intellectual property can they use? The legal process took a few months.”

On his own, Shell had to figure out what it meant to sign a distributor as a founding partner compared with negotiating with a single entity such as Anheuser-Busch, for example, which is the typical path in sports marketing.

“It’s very rare for the distributor to drive the entire partnership,” he said. “We didn’t deal with any one brand.”

The talks between OVG and Brown Distributing first started about 18 months ago, before the pandemic. Shell said he got a tip to contact the distributor and “blew it off,” mostly because he didn’t quite understand the scope of an agreement at that level.

“Someone else brought (Brown) up to me again and I thought, what does that mean, talk to the distributor?” he said. “I did my research before I reached out to them, and within two weeks we had our first meeting. The conversations took off from there.”

Charles Attal, a local concert promoter with C3 Presents, OVG’s partner for booking shows at Moody Center, helped provide context and the history behind Brown Distributing and its role as a community asset.

“He’s the one I went to and asked if they had the (financial) capacity to do this,” Shell said. “He described the family and the dozens of brands they represent.”

Brown Distributing started as an Anheuser-Busch distributor with three beer trucks and four employees. Over the past 60 years, it’s grown to a company with 400 workers selling about 10 million cases of beer and nonalcoholic beverages every year.

The company expanded its beer distribution business in 2008 with the exploding craft beer scene in Austin.

The decision for which brands to serve at Moody Center has not been determined, Laurie Brown said. The company also supplies tea and water products. Delaware North Sportservice is the arena’s concessionaire.

“A-B has been our supplier for years; that’s why we are where we are,” she said. “We diversified and got other craft beers and certainly we hope A-B will be a big part of it.”

The arena opening coincides with Brown Distributing’s 60th anniversary, which means a lot for the Brown family.

“It’s great timing for us, celebrating that milestone,” she said. “We’ve always given back to the community. We wouldn’t be here if we didn’t have all the loyal customers and people that have supported us over the years. This will be a great addition to everything we do.”

OVG’s goal is to have eight founding partners by the time the arena opens next spring, he said.

“We’re not looking at specific categories,” Shell said. “It’s all about ties to Austin and the Texas market. We have enough (prospects) regardless of categories there that we’ll fill them all.”