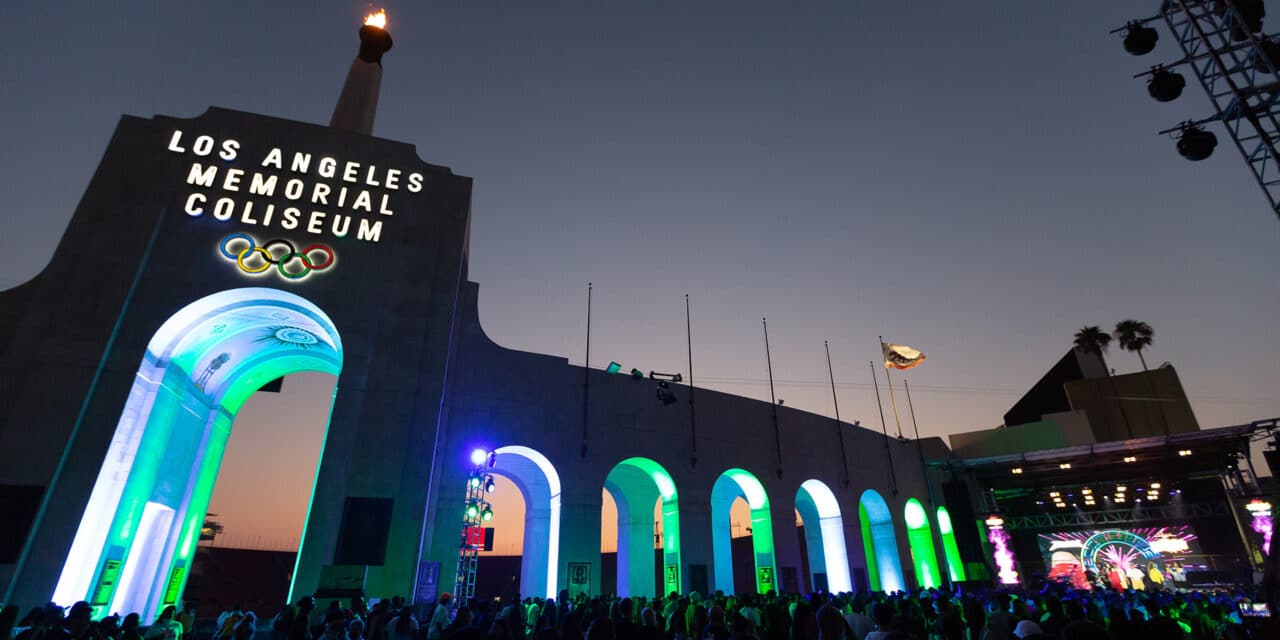 ARCH MADNESS: The Torch hosts concerts and events at the doorstep of the Los Angeles Memorial Coliseum. (Courtesy venue)

At Los Angeles’ venerable stadium, The Torch is lit

In a year of ceaseless pivoting, innovating and iterating comes The Torch, a new 10,000-capacity outdoor venue opened in mid-August beside the historic Los Angeles Coliseum that may set the bar for repurposing underused outdoor space.

It is also the only venue in the world with plaques in bronze relief of Knute Rockne, Jesse Owens, Bruce Springsteen, Pope John Paul II, Vin Scully and Armistice Day, among many others. This because the new venue’s footprint includes the 1923 building’s grand peristyle plaza, the venue’s signature feature, consisting of a large center arch with a sometimes-flaming cauldron atop it along with six flanking arches on each side and a total of 24 columns surrounding the Memorial Court of Honor.

In August 2019, The Coliseum, with a capacity of 78,467, finished a $315 million renovation, which included a new rooftop deck, the 1923 Club and well-appointed luxury suites.  The building had intended to bring in major concerts the following year, including Rammstein, which was rescheduled. “We had one full season with the Rams and the Trojans and then along came COVID,” explained Teresa Guy, director of booking and partnerships for the Los Angeles Memorial Coliseum. “We spent a long time this past year ideating and figuring out new ways.”

Her team — which included Kevin Daly, assistant general manager; Jen Gutierrez, event manager; Josh Rooney, then the chief revenue officer (who is no longer with the organization); and Kyle O’Brien, GM of Legends —initially considered an amphitheater in the east end zone of the Coliseum. That, however, has yet to come to fruition, though according to Guy it is still on the short list of capital expenditures

“During peak COVID, around April (2020) we went back to the drawing board like everybody else,” Guy explained. “We don’t own our parking, unfortunately, so we couldn’t be the Rose Bowl and do a drive-in. So we were like, ‘OK, we have to work with what we got,’ which is space within the building.” We started considering a cabaret model, a seated event we could socially distance and get people in and out safely, but when you’re talking about such a low capacity, 600 people seated, there’s not a lot of money to play with, let alone to get an artist in here especially if we’re trying to book it ourselves. So we threw that model out the window.” 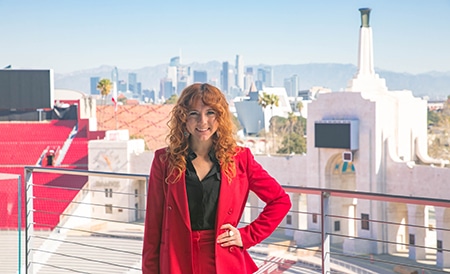 FINDING THE FLOW: Teresa Guy, director of booking and partnerships for the Coliseum, says the Torch configuration emerged after other ideas were discarded. (Courtesy venue)

Then came the idea of building out the peristyle plaza, which was used primarily for community events, including Cinco de Mayo and charitable events like Walk For Wishes in which stages were brought in and bands typically played under the center arch, which Guy says wasn’t the best use of space. “It didn’t allow for the best flow,” she said. “You didn’t find a lot of people who would go further to the north side because there are surrounding statues and at the gateway are these big concrete seats and natural blockage. It’s a relaxing place to sit, but for flow the center stage setup didn’t really work.”

Reconfiguring the stage location for The Torch, however, made for better flow for fan and artist alike. “Our north office is a perfect green room,” Guy said.  “Upstairs we have a perfect dressing room, so locating the stage right in front of that, you have your whole artist’s compound, our game management trailer, which we use as production offices, right there which created a natural and perfect back of house scenario. We also have a separate VIP gate at Gate 29, so it started to come together nicely with this footprint making the most sense. It didn’t hurt that once we got a plan in front of the fire marshal, they signed off all the way up to 10,000 capacity.”

The Torch kicked off Aug. 13 with no less an illustrious figure than Lil Wayne, who used the iconic location to launch GKUA, his lifestyle and cannabis brand. The event included performances, a dance contest and a number of high-profile (pun intended) artists, including Big Sean, The Game and Wiz Khalifa. “The point of the event was to bring his brand to everyone’s attention,” Guy explained. “Wayne wanted to do something big and to make a splash and it aligned perfectly for us.”

The wise choice of Weezy, one of the best-selling artists of all time and a proven road track record (he’s sold 1.52 million tickets and grossed $92.7 million, according to Pollstar Boxoffice reports), makes sense considering Guy’s impressive and well-rounded music industry career working with venues, promoters, agencies, management and artists under the tutelage of several industry legends. This included working in the booking department of L.A.’s Greek Theatre and the legendary Nederlander Concerts CEO Alex Hodges and moving to New York and working for the esteemed agent Steve Martin as he moved from The Agency Group to APA and where Guy worked with a number of high-profile artists. This included ex-New York Doll David Johansen, Ray Davies and an artist who Guy says “unequivocally changed her life.”

“Dolly Parton is an American treasure,” Guy says. “Dolly’s amazing. She’s very, very kind. And she knows how to work a room better than anyone I’ve ever seen, and make you feel like you’re seen and you’re heard and then on to the next. She is a true professional.”

Through another of her mentors, Christy Castillo Butcher, Guy landed a position at Venue Coalition, where she worked as a national booking manager. “It wasn’t a great fit, but it gave me the experience of booking big-size venues, arenas across North America and a lot of secondary (and) tertiary markets,” Guy says. “I was booking Kalamazoo and Moline and half of Canada. It was an educational experience.”

“We don’t own our parking, unfortunately, so we couldn’t be the Rose Bowl and do a drive-in. So we were like, ‘OK, we have to work with what we got,’ which is space within the building.” — TERESA GUY

Guy’s breadth of experience likely helped inform The Torch’s next show which seemingly had little in common with its debut but demonstrated the programming and production breadth of the new venue. “We did New Japan Pro-Wrestling, that was our second event,” Guy said of the Japanese professional wrestling league. “We kicked it off with Lil Wayne on Aug. 13 and then quick turnaround into New Japan Pro-Wrestling on Aug. 14. We brought in a little over 2,000 chairs, a 40×40 ring and did a crazy WWE-style wrestling event.”

Front and center of The Torch is its Stageline SL260 mobile stage and its various configurations. “I got my lesson in the Stageline fleet by going up to Montreal and seeing their whole operation,” said Guy, who also went to Montreal’s Osheaga Festival and saw the platform in action. “It means you can have a stage where there wasn’t one before in three to four hours. You can hang production, add any sort of trussing or have a thrust stage, it’s great. They make them very flexible. The standard set is maybe 32 by 32 but we bought additional decking and it can go up to 56 feet wide in the front. You’re really talking about something quite substantial at that point. If you’re an artist that needs a thrust, it’s very easy. It’s click in, plug and play with their pieces, and you can adapt to their staging. It’s a smart and easy solution for a venue that needed a stage.”

Though The Torch is permitted for 10,000 fans, Guy says its “sweet spot” is 5,000. “The Lil Wayne event had a little over 6,000,” she said. “Our Major League Soccer event (a concert featuing the DJ Kaytranada and Big Boi) had around 4,000. And that was perfect. You can flow and get a drink easy. We’ve renovated the old ticket booths that are now a permanent bar location. It’s a really cool experience for fans to get to see the history of the building, be a part of it and see an awesome show.”

As for what lies ahead, Guy says eight football games — USC  has seven home games this season, and the stadium will host the Pac-12 Championship Game — as well as “Once Upon a Time in L.A. Festival,” an old school hip-hop fest promoted by Live Nation which will be held in Exhibition Park Dec. 18.

Additionally, the Coliseum is approaching two major milestones: August 2022 marks the 50th anniversary of the historic Wattstax concert which coincides with the Coliseum’s centennial celebration. “We are in conversation with (Wattstax people) which aligns nicely with our 100th anniversary, which kicks off this fall,” Guy says. “We broke ground in 1921 and the building opened in 1923, so we’re going to take the opportunity to spend the next two years celebrating the 100 years of our history.”