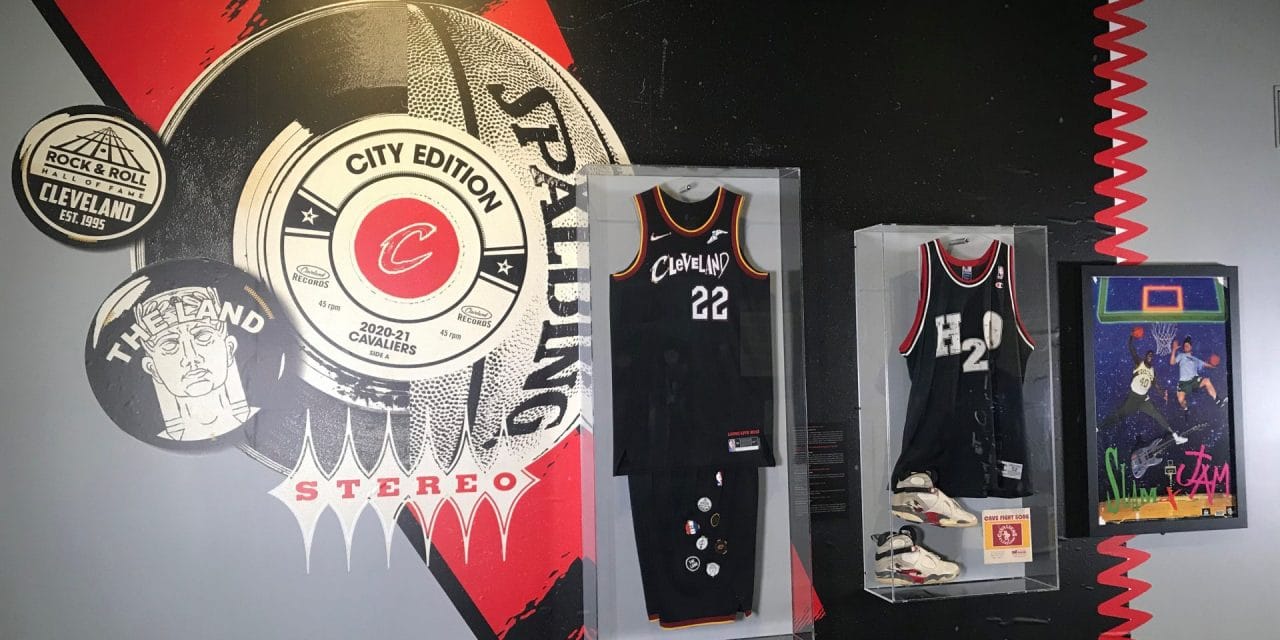 A co-branding deal between the NBA’s Cleveland Cavaliers and the Rock & Roll Hall of Fame extends to a small exhibit at the rock museum. (Courtesy team)

The stars have aligned in multiple circumstances for Rocket Mortgage FieldHouse. For the first time since Cleveland’s NBA arena opened in 1994, it will host the prestigious Rock & Roll Hall of Fame induction ceremony.

The 2021 event is scheduled for Oct. 30 in front of what is hoped to be a full house in an arena that seats 19,432 for basketball, said executives with the Cleveland Cavaliers. The capacity for the induction ceremony has not been determined. The team, under the direction of Antony Bonavita, executive vice president of venue operations, runs the facility.

The official announcement was made Tuesday after years of discussions and negotiations. It’s been a long time coming for Rocket Mortgage FieldHouse, considering the hall and museum sits one mile northwest of the arena, along the banks of Lake Erie.

“This is a gem for the city of Cleveland and our region,” Cavaliers and Rocket Mortgage FieldHouse CEO Len Komoroski told VenuesNow. “We are incredibly proud to be the home for that event as we move forward working on a multiyear agreement with our friends at the rock hall.”

The museum opened on Labor Day weekend in 1995. The induction ceremonies date to 1986, three years after the rock hall was founded. The event has been held in Cleveland five times, once at a local hotel. On four occasions, it took place at Public Hall, a vintage 10,000-seat venue that played host to Hall of Famers such as Buddy Holly, The Beatles, Jimi Hendrix, Janis Joplin, Cream and The Doors.

Over the past decade, with the exception of 2013 when it was held at the Nokia Theater (now Microsoft Theater) in Los Angeles, the event has rotated between Cleveland and New York. It’s been held four times at Barclays Center, home of the NBA’s Brooklyn Nets.

Last year’s ceremony, the 35th annual, was set for Public Hall until the pandemic shifted it to a virtual program.

The Cavaliers and the Rock & Roll Hall of Fame and Museum have talked about holding the event at the arena for more than a decade, the hall’s CEO Greg Harris told The Plain Dealer.

Cavs officials said those discussions intensified as the building underwent a $185 million renovation that was completed in 2019. 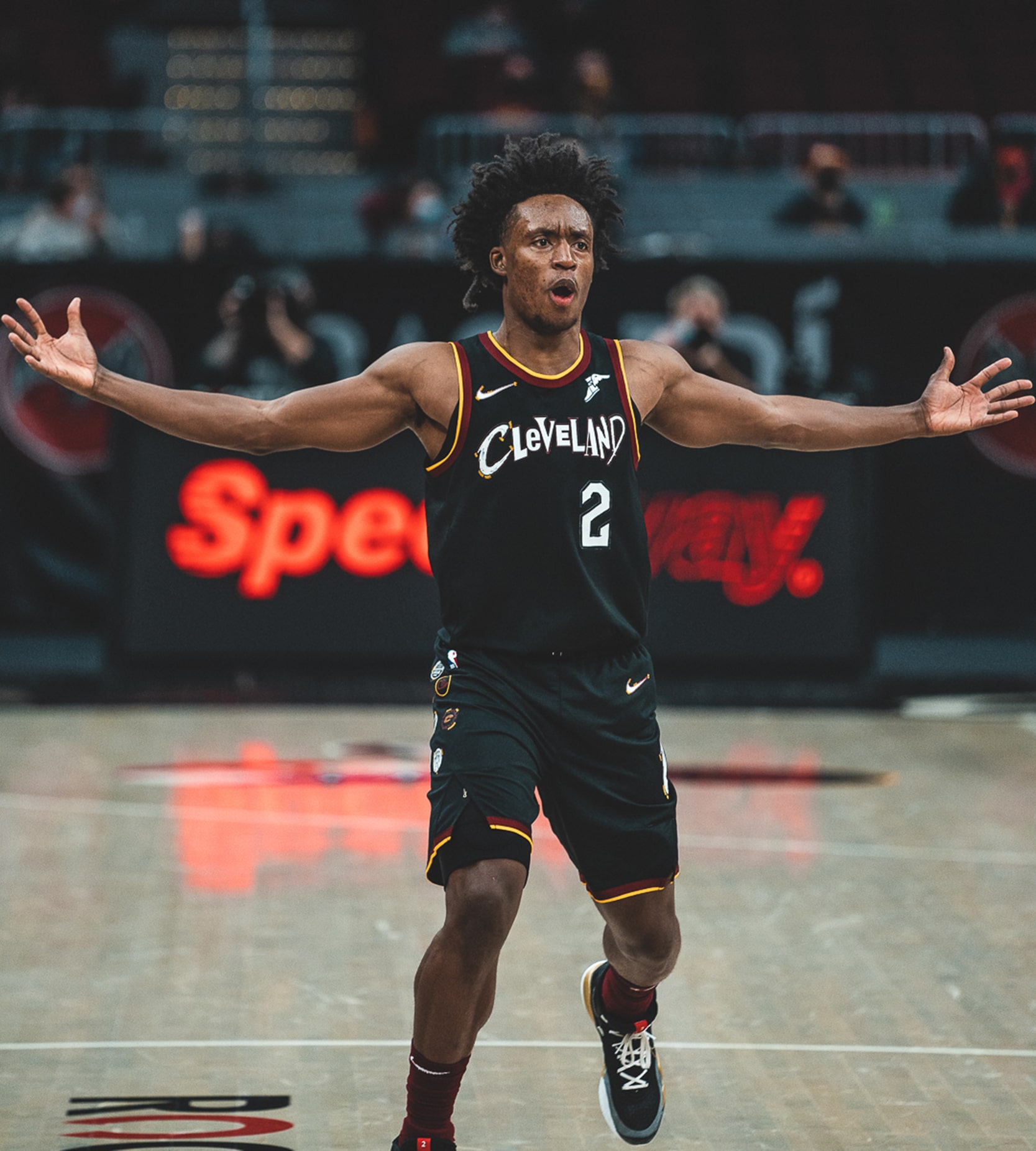 Most recently, the Cavs forged a partnership with the rock hall to theme its 2020-21 City Edition jersey and shorts after the institution and Cleveland’s rich musical heritage.

The tie-in between the team and the rock hall extends to a custom basketball floor at Rocket Mortgage FieldHouse with a pattern connecting to Record Rendezvous, which stood among Cleveland’s first vinyl record stores.

The Cavs will play on the floor a dozen times this season, according to team spokesperson Tad Carper.

In addition, the co-branding deal between the Cavaliers and the rock hall extends to a small exhibit at the museum showcasing the City Edition jerseys, which Nike designed in collaboration with the hall.

“A lot of stars aligned on how it all came to be,” said Brooke Bockelman, the arena’s vice president of booking and events. “We have had a partnership as it relates to culture and music and lifestyle all season.”

The relationship goes back further with touring acts playing the arena requesting access to the Rock & Roll Hall of Fame and Museum. The Cavaliers work with their counterparts to arrange private tours of the museum while the artists are in town, Bockelman said.

Komoroski sits on the rock hall’s board of directors. He said the extensive arena upgrades essentially sealed the deal. The Cavaliers can transform the venue to fit the event, starting with the exterior curtain wall and its lighting system with 1,100 different color combinations.

The new digital signs inside the arena add to the branding element with 700 televisions on the concourses and the LED display system in the seating bowl. The increase in public gathering spaces and refreshed premium areas are another plus for the event, Komoroski said.

“We’re much better suited and prepared to host an event of this magnitude and present it on a platform and stage that it’s worthy of,” he said. “It will be an absolutely stunning event in terms of all the tools that we have.”

More officials will go through the facility in the coming months as they prepare for the event, Bockelman said.

“There’s a good chance the curtain wall will be lit up in black and red, the rock hall’s colors,” she said.

During the pandemic, the key question remains how many folks will be allowed to attend the event.

As of this week, the Cavaliers were allowed to increase capacity to 25% for NBA games, which translates to about 4,000 fans. They started the season with restricted attendance of 300 before gradually increasing those numbers to 1,900 and 2,700.

The arena, in conjunction with Cleveland Clinic, the renowned academic medical center, was certified by the Global Biorisk Advisory Council and Well Building Institute, two programs tied to health and sanitation protocols.

The Cavaliers basically doubled down on those approval ratings.

“We feel we have one of the safest buildings in Ohio,” Komoroski said. “Tickets won’t go on sale until early July. Our hope as an industry is that live entertainment will start to make its way back in meaningful fashion toward the latter part of this year and continue to evolve in 2022.”

The Cavaliers are still determining pre-sale opportunities for their season-ticket holders and other stakeholders, Bockelman said. The 60 suites will be open and Aramark’s concession stands will be in operation.

Bockelman could not share details of the rental agreement other than to say the Cavaliers receive a share of revenue streams. Prior to the event, there will be an extensive load-in period over several days to accommodate HBO’s live broadcast production, she said.

There are contingency plans in place to scale arena capacity for the induction ceremony depending on how things play out later this year in Cleveland with the pandemic, Bockelman said.

This year’s nominees include Devo, Iron Maiden, Carole King, Todd Rundgren, Tina Turner, Foo Fighters and Dionne Warwick. The inductees will be announced in May.

“Our venue will enable more fans to be part of the live event,” Komoroski said. “Public Hall was limited in capacity. Vaccinations continue to accelerate and grow. As we make our way to Oct. 30, the world is going to look decidedly different than it does right now.”