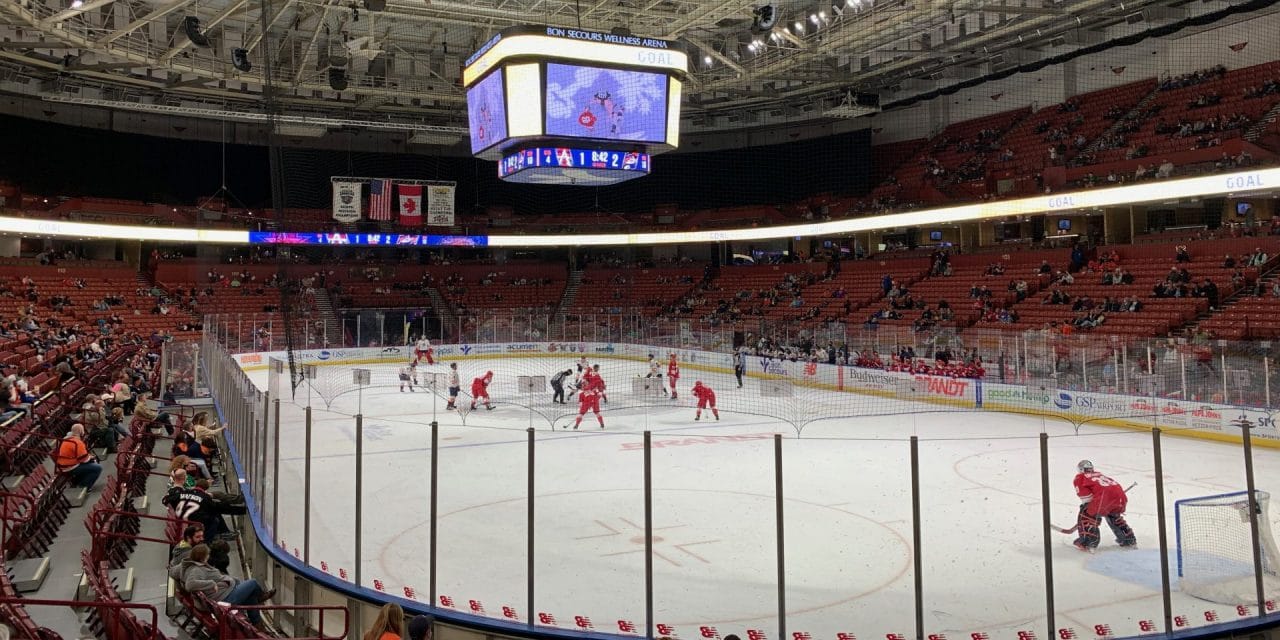 The Greenville Swamp Rabbits of the ECHL play before a limited-capacity crowd of 2,754 at Bon Secours Wellness Arena on Feb. 26. (Don Muret / Staff)

In a season of uncertainty, this South Carolina minor league hockey team plays on

GREENVILLE, S.C. — Minor league hockey is a living, breathing thing during the pandemic in this Southeast city of 74,000. The Greenville Swamp Rabbits are playing games in front of fans at Bon Secours Wellness Arena.

The Swamp Rabbits, named for an old railroad line that ran through town, are part of the ECHL, which stretches across North America from Orlando, Florida to Boise, Idaho.

The ECHL has 26 teams, and a dozen of them — almost half the league — decided not to operate this season because of COVID-19 and restrictions over mass gatherings in their respective states.

Greenville is among the 14 remaining teams that forged ahead with play, and one of the few clubs allowing fans to attend games. Capacity is restricted to roughly 30% of the 16,000-seat arena, with final numbers tied to social distance pod seating.

(The Charlotte Checkers, Greenville’s big brother in the American Hockey League, are not playing this season in North Carolina. Greenville has an affiliation with Charlotte and both are part of the NHL Florida Panthers farm system).

In Greenville, the timing of the pandemic could not have been worse for Spire Hockey South, the team’s ownership group. Spire had a verbal agreement to acquire the team in March 2020, one week before the shutdown of sports, said Todd Mackin, president of the Swamp Rabbits.

The deal was officially announced in May, two months after the ECHL canceled the rest of the 2019-20 season.

Spire Hockey South is a subsidiary of Spire Sports and Entertainment, which extends to ownership of the ECHL’s Rapid City (S.D.) Rush, Knoxville (Iowa) Raceway and a NASCAR Cup series race team, among other businesses.

Mackin has 10 years of experience in the ECHL after spending eight years with the NFL’s Kansas City Chiefs. He remembers the early stages of the pandemic and all the uncertainty across sports. 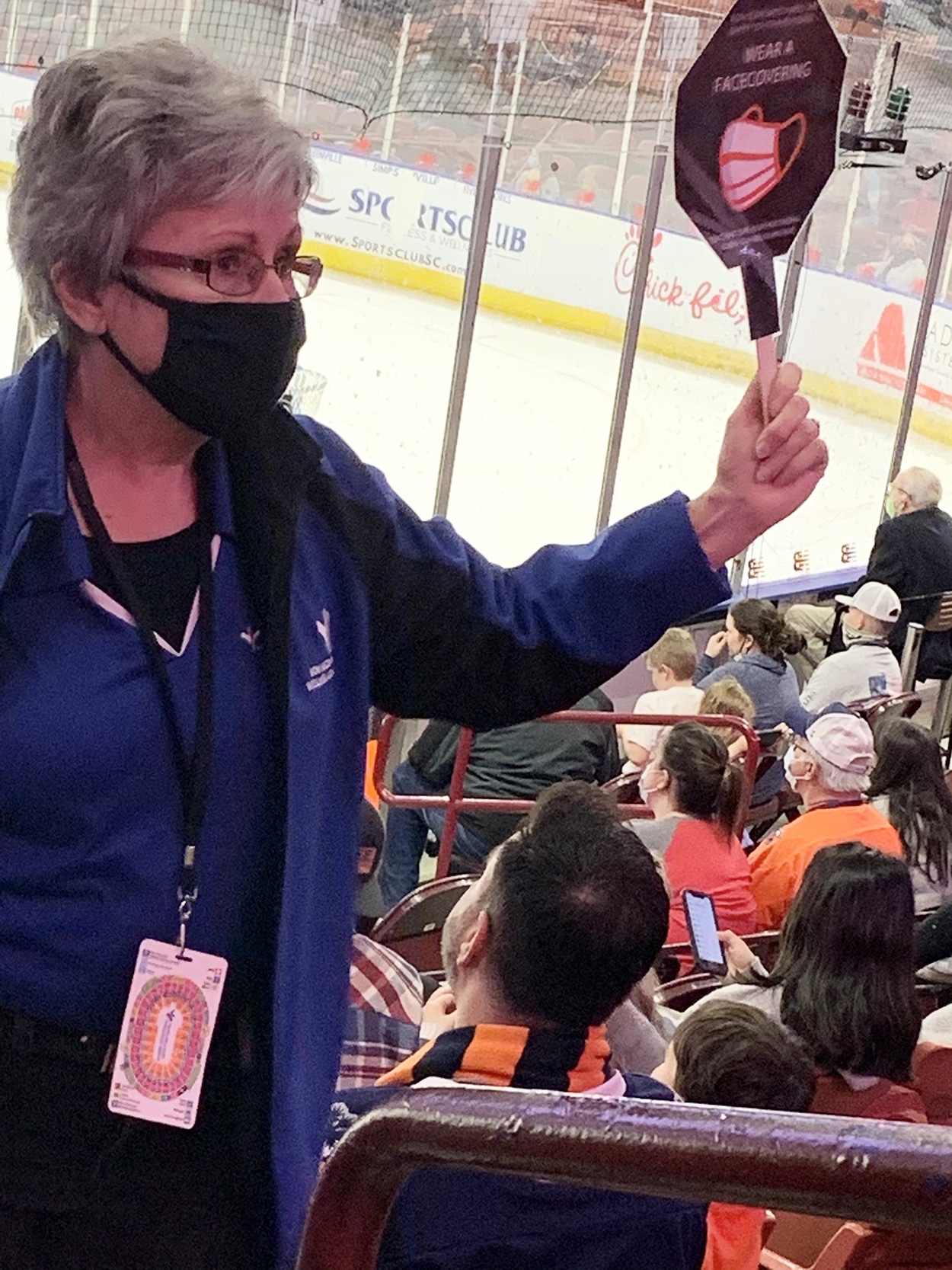 “My first role was to cancel the season,” Mackin said. “It was (March 12) and we’re the only game in the ECHL that day. I’m on the phone with the commissioner, asking him if we’re playing. The answer was no.”

One year later, the Swamp Rabbits are back in action after working closely with Beth Paul, the arena’s general manager, the state of South Carolina and local health officials. They’re all committed to playing hockey this season with fans in a safe and controlled environment.

Before the season began, ECHL teams, in tandem with the league, surveyed season-ticket holders to get their feedback on whether it made sense to play hockey in 2020-21. For the Swamp Rabbits, the response was varied, Mackin said.

“If there was an opportunity for us to play with a reasonable amount of fans, we were going to move forward with it,” he said. “There’s a financial hit for us. But there are so many variables to consider, plus the reception from the community to come in here and shut down a season when a team across the state is playing.”

The other team is the ECHL’s South Carolina Stingrays, a Washington Capitals’ affiliate. They are in a similar situation as Greenville, playing games with limited crowds at North Charleston Coliseum, a 14,000-capacity venue.

At Bon Secours Wellness Arena, the Swamp Rabbits drew 2,754 fans against the Allen (Texas) Americans on Feb. 26, their biggest crowd of the season. It was “Wizards Night” a promotion in which kids and adults alike could dress up as their favorite fantasy character.

Minor league hockey typically draws fans of multiple NHL teams. Jerseys were spotted for the Chicago Blackhawks, Vegas Golden Knights and the Carolina Hurricanes, which starting today, will have fans in the stands for home games at PNC Arena in Raleigh, North Carolina.

“We are slowly progressing and cautiously optimistic that we’re heading in the right direction,” Mackin said. “The building did a phenomenal job of putting the rules in place and sticking to them.”

From observing crowd behavior, fans in attendance followed most of the rules. They wore face masks on the concourse to buy concessions and visit the restroom, but many did not wear face cover in the seating bowl as required when not eating and drinking, per arena rules.

The LED ribbon board inside the bowl displayed “Wear A Face Covering” messages and ushers walked down the aisles with small signs reminding people to do the same thing, but many fans appeared to ignore the alerts.

The state of South Carolina does not have a mask mandate.

“We’ve done the best we can to make sure people are wearing their masks,” Mackin said prior to the game. “People are feeling a little bit more safe and have seen that the arena has had other events. They’re starting to feel more comfortable coming out.”

Per caps are up for food, drink and retail, according to Mackin and Paul. It’s due in part to shorter lines with fewer fans in the venue, similar to what other teams and vendors have experienced serving fans over the past 12 months.

“Speed of service is quicker without as many people in line but our concession partners know how to staff appropriately for the crowd,” Paul said. “It depends on the type of patron too. We have diehard hockey fans. They love the entire experience, including the hospitality side. It’s a positive trend for sure.”

The Swamp Rabbits’ first home game was Dec. 11 and their final home game is May 30.

The regular season ends June 6. The postseason has been consolidated into one month, with the top four teams from the Eastern and Western conferences qualifying for the playoffs. Each playoff series is limited to five games.

To ownership’s credit, the Swamp Rabbits have not had any layoffs or furloughs. The team has 15 full-time employees, which is pretty lean for a professional sports franchise. By comparison, the ECHL’s Kansas City Mavericks, Mackin’s old employer, had 24 full-time staff.

“A lot of teams cut excess fat from their organizations,” he said. “It’s been challenging but a positive thing for our athletes and staff to all have jobs. We’ve got a few more employees than previous ownership. Had we not played, I believe we would have gone in the other direction.”

Minor league sports is where sports biz professionals lay the foundation for their career and see if they’ve got what it takes to survive in a tough sales environment. The pandemic adds greater pressure to the equation, for both the younger generation and industry veterans.

“Every day brings forth a different set of challenges,” Mackin said. “It’s mentally draining, trying to figure out what’s right for the organization and the community. I’m sure we’ll all look back on this and try to figure out what we’ve learned. We’re more flexible on things that maybe we couldn’t be in the past.”

The same thing goes for arena operations, Paul said. The venue played host to Pro Bull Riders in January before holding its first concert since the shutdown, Toby Mac on Feb. 24. Attendance was 2,800 with a full band production.

Next up for special events is an April 9 comedy show starring Mike Epps in a center-stage configuration.

The arena has tentative dates on hold for several concerts in the fall and the first and second quarter of 2022.

“The mindset is being adaptable in decision making and open to new ideas,” Paul said. “If you feel like you’re unable to make quick decisions, then it would have been a very difficult COVID-19 season.”

The arena invested $1.5 million in retrofits to prevent the spread of coronavirus that includes a new Evolv contactless screening system and mobile ticket scanning infrastructure. The money came from the county level through the federal CARES Act stimulus package.

“One thing both Todd and I did was maintain the structure of our organizations,” Paul said. “It’s been a grind but when the industry does reopen, we have staff in place. We don’t have to start from scratch whenever we’re ready to go. We’re sitting in a very good spot.”