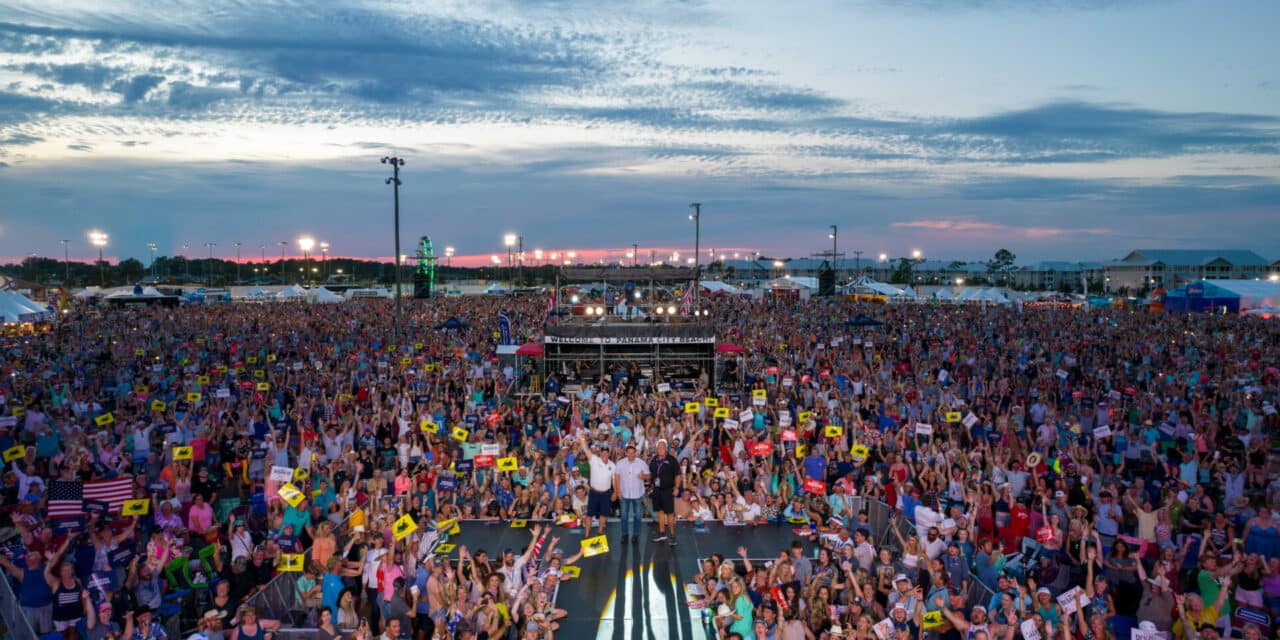 NICE PROBLEM: Organizers of the Gulf Coast Jam must figure out how to accommodate 24,000 festivalgoers for the 2023 event. Pictured at a past fest are COO Mark Sheldon, Florida Gov. Ron Desantis and Executive Producer Rendy Lovelady. (Courtesy Gulf Coast Jam)

For the first time in its 11-year history, the Gulf Coast Jam Presented by Jim Beam in Panama City Beach sold out — six months in advance. Dates are June 1-4, 2023.

Organizers are in the process of figuring out how to accommodate the expected crowd of 24,000, the biggest to date. The previous high was 22,000 set in 2021.

“We are trying to figure it out, but the bottom line from our perspective is that we have our number in the house and now it’s about adjusting our dirt, which has become golden now,” said Rendy Lovelady, executive producer of Gulf Coast Jam.

“Some of the things we have done early and strategically as we’ve been going through the plan is we added an extra gate and rented another parking lot for 1,000 cars in walking distance to get people in,” added Mark Sheldon, COO of Gulf Coast Jam. “We’ve added more security, more portalets, more ice, more of everything, essentially.” 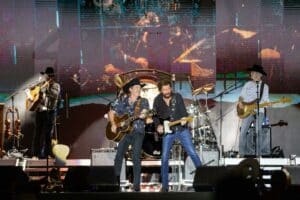 While the backstage number remains consistent from a catering and operational perspective, organizers are focused on providing ample food and beverage for attendees.

At the time of the sellout, a four-day general admission ticket was $199, college student passes were $179 and admission for military and first responders was $149. People are attending from every state, which makes the event a boon for local business in Panama City Beach, which has 16,000 rental rooms.

“We will end up taking the vast majority of those rooms for the festival,” Sheldon said.

From an economic perspective, it’s already a busy time of year and the beach is in full swing during the festival, the weekend after Memorial Day. “It will be a very busy town and a very busy weekend,” Sheldon added. “So, the economics work really well and the city is very happy with where we stand now.”

Sheldon and Lovelady credit the reputation of the festival and the strength of the lineup for the sellout. More than 20 acts are confirmed, including headliners Morgan Wallen, Miranda Lambert, Kane Brown and HARDY.

“We knew with this amazing lineup of artists, we had the potential to have our first sellout, but we sure didn’t think it would come six months before we open the gates,” said Sheldon.

“But it’s our eleventh year,” Lovelady said. “People know us. People know we’re here. We went through the two years of COVID and we got through that. We had to cancel because of a hurricane and we made everything right with that. Our consumers trusts us and they know we are going to do the right thing.”

The Gulf Coast Jam launched in 2013 with Toby Keith, Trace Adkins and The Charlie Daniels Band. Organizers added an extra day this year to commemorate the festival’s 10th anniversary. The fourth day was such a success, the decision was made to make the additional day a permanent part of the schedule.

Lovelady said, “I texted Mark this morning and said ‘We’ve got a big problem. Nobody purchased any tickets last night. Oh wait, I forgot we’re sold out.’ It was a fun note because we normally look every day, multiple times a day. We are six months out and God’s blessed us in such a way that we can actually enjoy Christmas for the first time.”