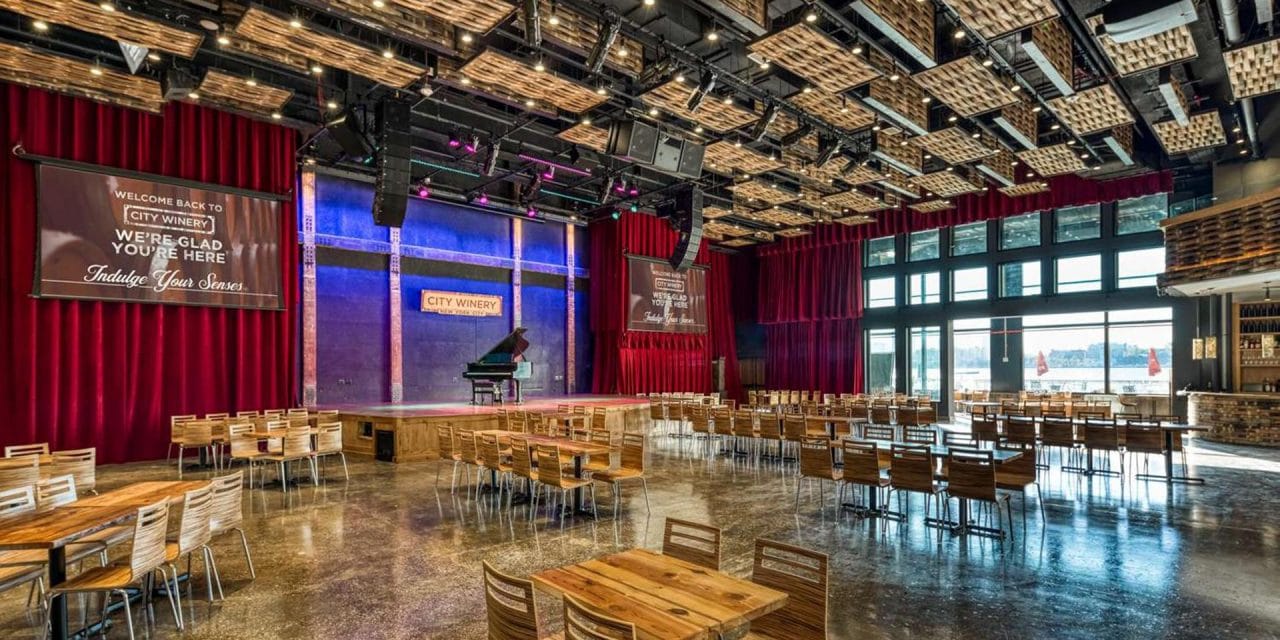 City Winery NYC is preparing to open at Pier 57 in Hudson River Park, a year after the coronavirus pandemic put plans on pause. (Courtesy venue)

Six months after moving out of the Varick Street location it occupied since opening in 2008, City Winery NYC was preparing for the opening of its new concert venues at Pier 57 in Hudson River Park when COVID-19 forced the opening to be postponed, along with more than 60 other shows.

It would be another year before New York would sufficiently lift COVID-19 restrictions to allow the long-awaited new City Winery NYC to open for live, indoor events. Gov. Andrew Cuomo did just that March 3, allowing venues to reopen at 33% capacity or 100 patrons, whichever is greater, beginning April 2.  While City Winery NYC opened for takeout and delivery of its food and beverage menu, concerts remained dark (City Winery’s already-open Nashville outpost was No. 1 among Q1 club venues, selling 3,048 tickets during the reporting period) – until now.

City Winery founder and CEO Michael Dorf and Senior Vice President of Programming Shlomo Lipetz leapt into action, booking shows for live audiences at the new facility starting April 3 with two shows with Rhett Miller.
Artists and fans alike will notice changes not only in the capacity in New York but also as other City Winery locations reopen in Chicago, Philadelphia, Boston, Washington, D.C., and Atlanta.

Artists may be playing longer, multiple-night runs or residencies, and audiences may have to pass more vigorous screening to insure a healthy, COVID-free “bubble” inside the venue.

At least those are as of press time – shows are being added as quickly as they can be confirmed, and most have quickly sold out. . 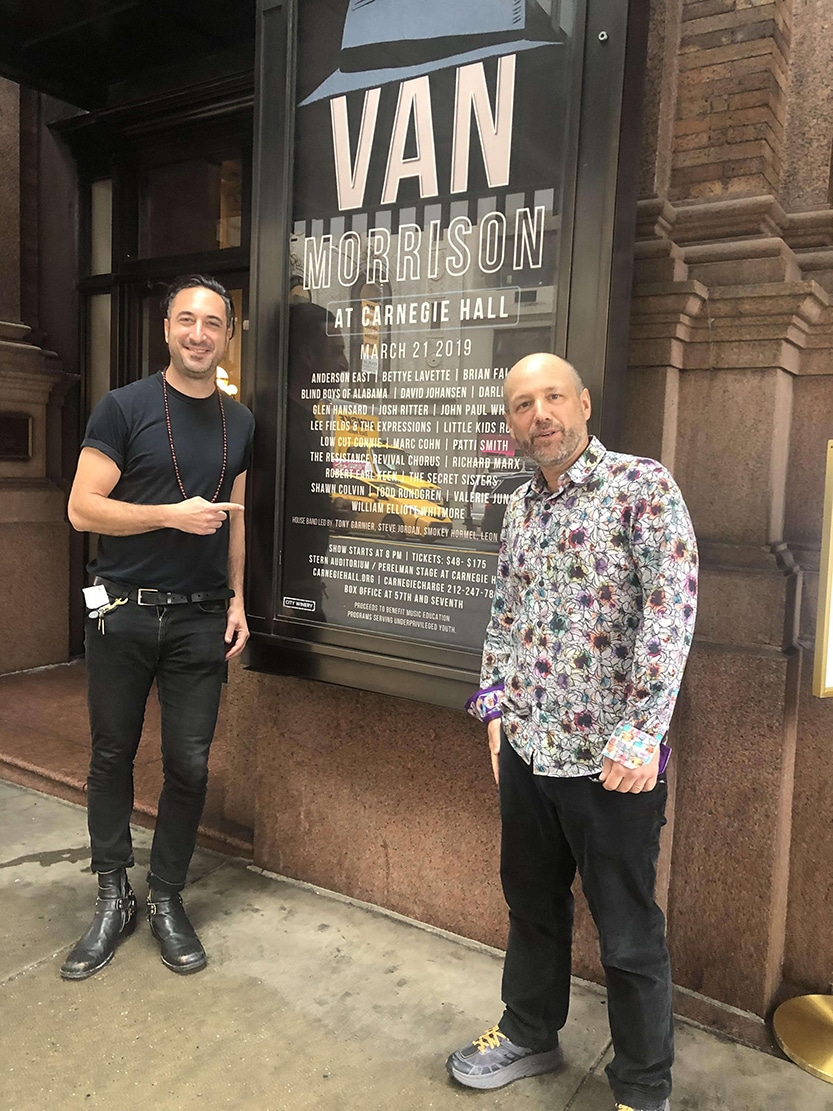 Shlomo Lipetz (left), City Winery’s VP of programming, and CEO Michael Dorf outside Carnegie Hall in New York City and a poster for the 2019 edition of Dorf’s “The Music Of” concerts, which since 2004 have benefited music education programs for underprivileged youths. (Courtesy City Winery)

It’s hoped that as restrictions continue to ease and allowable caps rise, City Winery NYC may see full crowds later this year. But in the meantime, Dorf and Lipetz are moving quickly to book the capacity they have.

“In 12 days, we confirmed two and a half months of shows,” Lipetz says, acknowledging that having City Winery locations in Nashville and Atlanta, which opened earlier, helped routing artists into New York. “Steve Earle is playing with Emmylou Harris next weekend in Nashville. He lives in New York and we booked him here.

“The way I’ve been pitching to agents, artists and managers, is that our investing in artists is also investing in fans,” Lipetz continues. “We didn’t even know if fans would come out.”

But they had a good idea. City Winery booked a “Concerts in the Vineyard” series at its Hudson Valley location in the fall and were pleasantly surprised when it sold out almost every show in a couple of weeks. In Nashville,  City Winery reported 93 shows to Pollstar, selling 9,270 tickets and grossing $348,216 since welcoming back indoor shows in September.

“Clearly this is not about making money for us; we’re just thrilled to be opening the ecosystem of live music and get our staff and our team back to work,” Dorf says. “We’re probably going to lose a little bit of money but that’s OK. Nobody’s getting the big guarantees or the home run bookings. It’s about getting back to work.”

The day Pollstar spoke with Dorf and Lipetz, it was announced that the age of vaccine eligibility was lowered to 30 in New York, hitting City Winery’s demographic. “By mid-May in New York CIty, we should be able to accommodate a fully vaccinated audience,” Dorf predicts.
City Winery is working with Clear, a company that employs biometrics for identification purposes through a mobile app that now includes the Health Pass, in which verified users can upload health information to allow touchless access and privacy. Components of Health Pass may include a real-time health survey screening, temperature screening and/or COVID-related test results directly from an approved lab provider.

“There’s all kinds of laws like HIPAA and it’s going to be a big issue the industry has grappled with for a while now,” Dorf says. “Clear is the leading paperless company with experience at airports and with TSA, so they came out with a health app that allows for a consumer to upload to the cloud their vaccine status and 72-hour PCR tests for COVID or 48 hours for the rapid antigen test.”

Using the Health Pass, clubs can set their own rules for entry, whether it’s requiring a vaccine or testing or both. When a patron shows their Health Pass, a large green check mark appears on the device screen indicating they pass screening.

“You can have a single ticketing system and that big green Health Pass check takes care of screening and admissions,” Dorf says. “It’s a very functional, seamless, touchless, system. We’re still doing temperature checks and screening as required, and the Clear machines we are installing takes your temperature.”

Dorf acknowledges that not all states require this, including some in which City Winery operates such as Georgia (City Winery Atlanta). “We’re not allowing that to happen without basic safety questions,” he says. “We’re allowing a professional digital setup to take care of the questions instead of our staff. We’re trying to get on the bus and we’re encouraging people to download the app. It’s going to be a little awkward for a while.”

Preliminary data from a City Winery survey of ticketbuyers shows they may not have much to worry about – 90% of them have already received at least one vaccine shot or plan to before they attend, Dorf says, and 9% plan to get it when eligible. Only 1% said they didn’t intend to get the shot. “This is very telling about the sophisticated music consumer, believers in science (and lovers of music)!” Dorf added.

Yet there is expected resistance to the Health Pass app, including by some artists who have already indicated to Dorf and Lipsetz that they will not perform if audiences are required to provide proof of vaccination.

“How do we deal with that?” Lipetz rhetorically asks. “The fine line is we have a lot of responsibility as a national brand to make decisions that will protect artists and staff.”

Dorf adds that his team has had “vigorous conversations” about the issue of safety, “because we want to do the right thing and respect artists and fans and their opinions. We don’t allow guns in our venues and some states we operate in have open carry and they have a right as Americans and God bless ‘em. We don’t allow that, and even though we have signs that say ‘please no guns’ and ‘no shoes, no shirt, no mask, no service,’ we don’t really have it come up much from our audiences.

“The vaccine is a good thing to do,” Dorf continues. “It’s a sensitive area but we want to be safe. We want vaccine cards in order to have a bubble and would feel great about being surrounded by a 100% vaccinated room, a psychological safety bubble. It’s part of our future and we’re going to have to be more responsive to science. Ultimately we want to put on a safe, great show for both artists and audiences. If that means checking a person’s chemistry and their guns at the door, we’re all for it.”

This story originally ran in Pollstar.