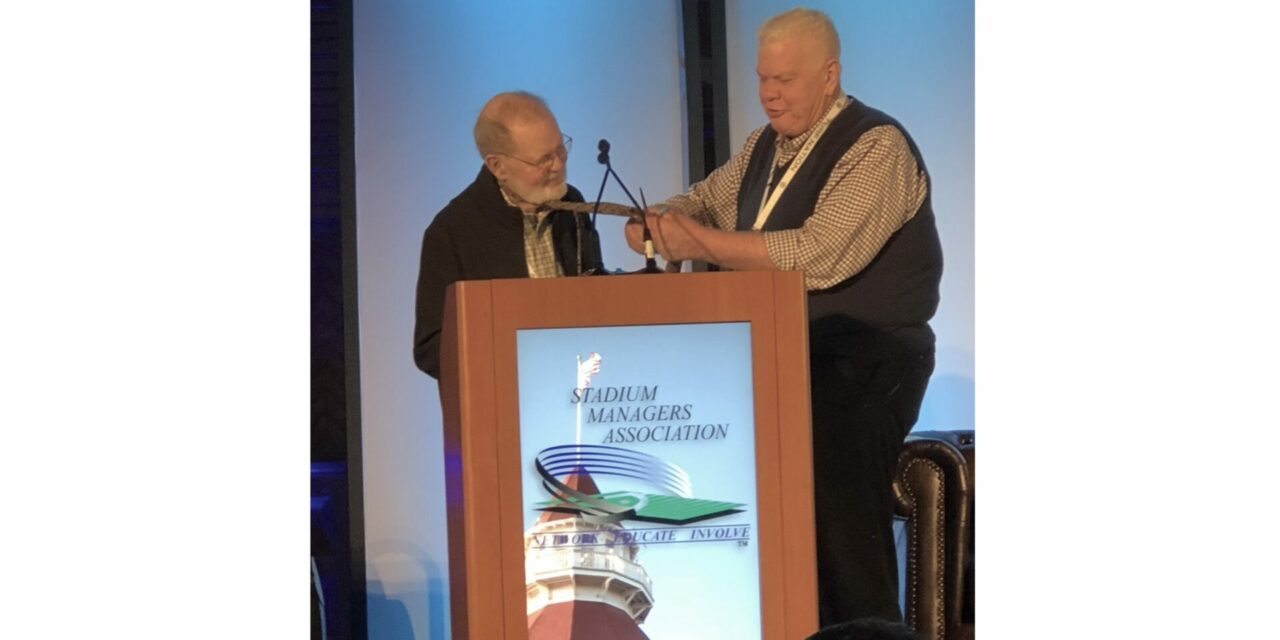 CUT UP: Rick Nafe cuts the tie of sports architect Ron Labinski at the 2018 Stadium Managers Association seminar. The routine stood as a symbol for keeping it casual at the event. (Courtesy Chris Lamberth)

Rick Nafe stands among the funniest stadium managers in the business, but he’ll also be remembered for his support of the younger generation pursuing careers in venue operations.

Nafe died May 26, according to his wife, Dana, who posted the news on her husband’s Facebook page. The co-founder of the Stadium Managers Association was 70 years old.

For Nafe, a member of the 2019 VenuesNow Hall of Honor, holding a keen sense of humor was to his benefit, considering the tenants he worked with over 40 years in the Tampa-St. Petersburg region.

He ran Tampa Stadium, the first home for the Buccaneers, an NFL expansion team that struggled to win games over their first 20 seasons. Years later, Nafe moved across Tampa Bay to St. Petersburg to manage Tropicana Field. In 2008, the Rays made the World Series, and for the most part, they’ve fielded a winning team over the past 15 years despite finishing near the basement in MLB attendance.

In a statement, Stuart Sternberg, the Rays’ principal owner, said, “Rick Nafe was a long-time, loyal Rays employee and a devoted champion of the Tampa Bay region. He would put you at ease in trying times, and his true gift was putting smiles on faces and adding laughter to the world.”

The Rays spoke from experience.

Two years ago, VenuesNow texted Nafe the local story about a homeless man living in a suite for two weeks at Al Lang Stadium in St. Pete, a former spring training facility converted into a  minor league soccer venue for the Tampa Bay Rowdies. The Rays run Al Lang Stadium. At the time, Nafe had been retired for about a year and was kiddingly asked, ‘See what happens when you retire?’

His response: “I called over to the Rays and told them Dana and I have been looking for a small one bedroom efficiency that overlooks the water we could buy. Did they have others in stock?”

It’s just one example of his sharp wit. The Stadium Managers Association’s annual seminar put the spotlight on Nafe, among the trade group’s co-founders in the 1980s and emcee of the conference for many years. The speaker podium was his personal stage to verbally (and good-naturedly) stick the proverbial needle in somebody’s side.

As part of the February 2020 seminar in Phoenix, attendees were greeted with the sound of drums pounding to kick off the first day of educational panels. The stunt was Nafe’s comical way of paying homage to the Houston Astros’ elaborate sign-stealing system using audio cues at Minute Maid Park. The caper resulted in the season-long suspension of the team’s general manager Jeff Luhnow and manager A.J. Hinch.

For some, though, Nafe’s delivery could ruffle a few feathers, said food service consultant Chris Bigelow.

“He didn’t have a filter sometimes,” Bigelow said. “In the old days, that was fine. The big thing that everybody knew him for was (leading) the SMA. He helped plan the conferences, but what we all saw was the end product and seeing him at the meetings and harassing everybody in the audience. But he was still a great guy and very funny.”

Most folks embraced Nafe’s sense of humor, based on the dozens of comments posted on social media outlets paying tribute to him.

“Rick could be serious with you and rib you, but it was in a way that no one else could do and that’s what has made SMA successful,” said Jimmie Sacco, vice president of stadium management at Heinz Field, home of the NFL Pittsburgh Steelers. “It’s a relaxed atmosphere but continuing the growth and the education and the programs that he’s established.”

On his own, Nafe embraced new members of the organization and got them to support the SMA Scholarship Foundation Board, which provides financing for college students studying to become facility managers. Every year, the foundation holds a silent auction of sports tickets, merchandise and other items to help raise money for those scholarships.

Sacco recalled his first time attending the seminar in 1991. Sacco’s 50-plus year career started at the old Pittsburgh Civic Arena before he moved over to Three Rivers Stadium, starting a long relationship with the Steelers. In 1992, Sacco was elected to the SMA board of directors, and a few years later, he was elevated to group president.

“Rick showed me the ropes and mentored me,” he said. “He was a welcoming, accepting individual that a lot of people never gave him credit for. Rick stayed focused with this organization and it became a major networking event. Before, it was just managers and now it has expanded to sales and marketing people, guest relations (and) other services.”

Jay Parker, vice president of live events and spectaculars at Daktronics and Chris Lamberth, head of sports and public assembly at tvsdesign, both got to know Nafe pretty well over the past 20 years after joining the SMA.

“He was a gentle giant, but could be intimidating if you didn’t know him,” Parker said.

It didn’t stop Parker, then a young sales executive, from asking Nafe to join the Daktronics crew for dinner. Over the past two decades, it’s become a yearly tradition for Parker, Nafe and other MLB stadium managers.

“Rick started out as a customer for Daktronics and at the end, he was a friend of mine,” Parker said. “That’s what’s so great about our industry. It’s big, but it’s also small in that you get to know a lot of people personally. Rick was part of the ‘family.’ He’s going to be sorely missed.”

Lamberth, an architect by trade, attended his first seminar while he was employed with 360 Architecture. He later got more deeply involved by joining the foundation’s board, due in part to Nafe’s commitment to the effort.

“I didn’t know what to expect,” Lamberth said. “Who was this guy up there? He was carefree and had an irreverent approach. All these other conferences I had been to before had been so formal. He brought some fresh air to it and that was kind of cool. Rick was the voice, the spirit.”

Troy Hoberg, a 20-year sports construction executive now working for Legends, said he was the subject of multiple practical jokes at the hands of Nafe. It was all in good fun, Hoberg said.

Said Sacco: “SMA will continue and follow Rick’s legacy, because he taught so many of us his way and that’s the way it will be, moving us into the next generations of young venue operators.”