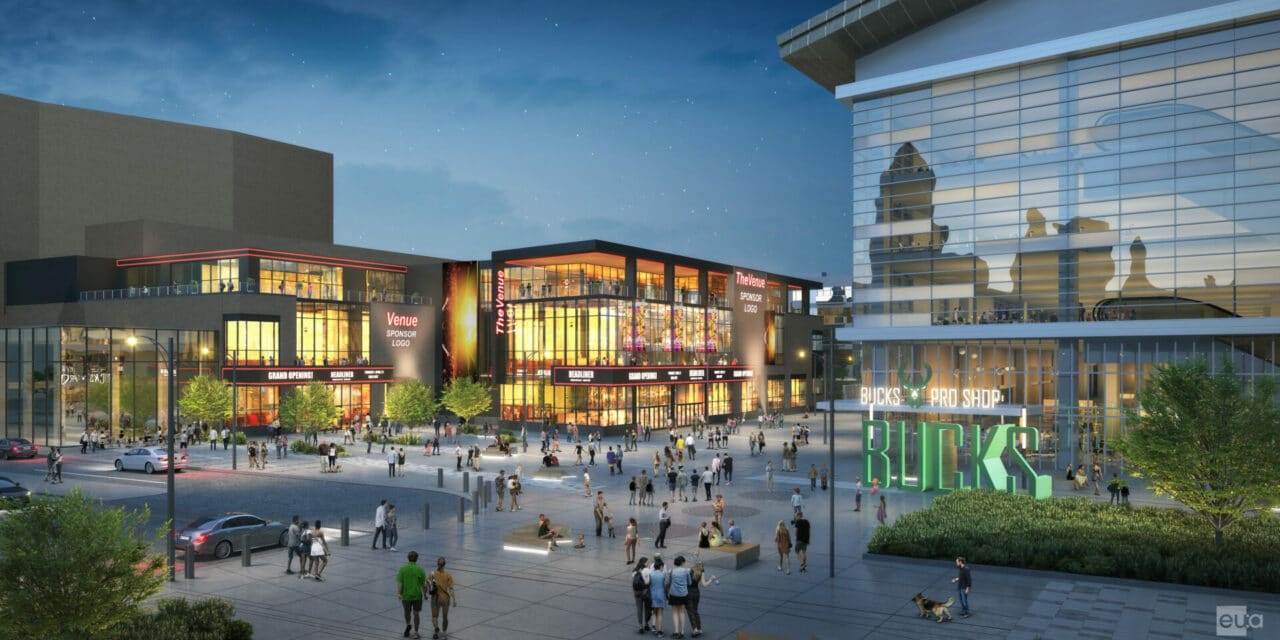 Although falling short of their 2022 playoffs dreams after losing in seven games to the Boston Celtics in the NBA playoffs, the momentum continues to build for the Milwaukee Bucks – and their Deer District mixed-use entertainment district across the street from Fiserv Forum.

Two new concert venues are headed to the 30-plus-acre district, funded by a $50 million joint venture between the Bucks and FPC Live, a division of Milwaukee-based Frank Productions owned by Live Nation.

Plans call for indoor, general admission venues at 800 and 4,000 capacity, expected to open in late 2023 on what is currently vacant land formerly occupied by the old Bradley Center, the Bucks’ former home.

“It really is directionally where the music business is going – where established and embryonic artists want to perform and more importantly in an environment where people want to watch them,” said Bucks President Peter Feigin. “Crowds are no longer sitting in seated theaters and auditoriums, they want general admission and access and the close-to-the-action experience, and Live Nation has spearheaded that around the country. For this market, it doesn’t really exist in the modern form, so we’re very excited.”

Game 6 of the NBA Eastern Conference semifinals drew 11,000 people to the Deer District’s bars and restaurants for watch parties for fans to take in the action while the games took place at Fiserv Forum.

While the district provides the opportunity for fans to road away games in a festive atmosphere, Feigin says the attraction has become even bigger during home games, with the energy spilling over from inside the arena.

“You end up with a bigger crowd outside than inside, which is kind of fascinating,” he says.

The development’s success isn’t hurt by the fact the Bucks have been a top contender since the arena opened in 2018.

“It’s been the accelerant for the entire vision,” Feigin says of the team’s winning ways, with the 2021 championship run led by perennial all-star and MVP candidate Giannis Antetokounmpo. “We always knew Fiserv Forum would be the nucleus, and then if you have a very successful team built around that success, you can build interest in and around the district for us.”

Feigin says lessons from 2021 paid off, when the team went from restricted attendance at Fiserv Forum as late as May to full-capacity in June, to this year with pent-up demand and another strong team on the court. (During last year’s NBA Finals, crowds swelled to more than 60,000 in the district, which resulted in a COVID-19 outbreak among those congregating outdoors).

“It’s constant improvement and constant learning,” Feigin says of preparing for this year’s playoff run. “We understood more of our massing outside, more understanding how to create seamless egress and ingress. All those pierces are very important to how you create a better experience for food and beverage and retail outside. If we talked a year ago, I would have told you we were unprepared for the popularity of the Deer District. When you’re thrown in over your head, you learn a lot.”

Not to go overlooked during the team’s on-court success and the facilities’ ramp-up as the pandemic shutdown eased, the team made history during the 24-month period in another way.  Ahead of the 2021-22 season, sports broadcast veteran Lisa Byington was named the team’s TV play-by-play announcer for games on local Bally Sports Wisconsin. Byington is reportedly the first female full-time play-by-play announcer for a major men’s professional sports team.

Feigin says Bucks ownership always strives to have its finger on the pulse and be on the right side of history, but the hiring process didn’t start with that intention.

“I’d love to say this was a mission to break the barrier and be innovative, but we went out on a national search for best-of-class announcer and Lisa was best of class,” he said, noting Byington’s experience in nationally broadcast basketball. “I think she’s taken it as a responsibility to be an example to others in the industry in broadcast, to encourage other female analysts and co-analysts that there is a road-map. It’s been an extraordinary benefit for the team, certainly for the broadcast and for the culture of what we want to create around the team.”