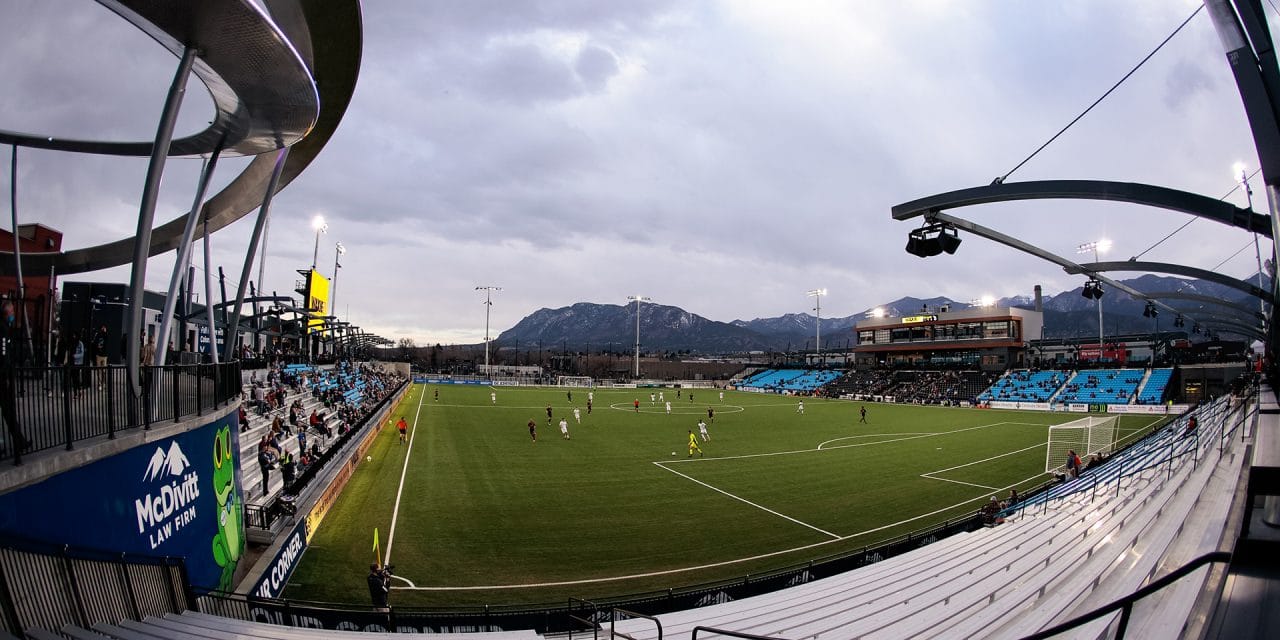 The flurry of new pro soccer venues across the country extends to the USL Championship, the sport’s second-highest level behind Major League Soccer. Weidner Field, the new home of the Colorado Springs Switchbacks FC, stands as that league’s latest gem.

The $40 million stadium, a mile southwest of the city’s downtown district, opened last weekend with an exhibition match against Orange County (California) SC. Perkins & Will, whose sports practice is based in Denver, designed the 8,000-seat facility.

The project was driven by the Switchbacks’ need for a new stadium to replace their old 4,000-seat home, which offered only basic amenities, according to officials with Perkins & Will.

It also met the requirements for Colorado Springs’ “City for Champions” initiative to create developments to drive tourism and new sources of revenue to the region. The city applied for a grant through the state and was awarded seed money to help launch the stadium project. (Ed Robson Arena, Colorado College’s hockey arena opening in October, also came out of that program.)

The Rocky Mountains serve as a majestic backdrop for many outdoor venues in Colorado, and Weidner Field falls in line with that trend, providing spectacular views.

Beyond the mountain ranges, one signature design feature is “The Epicenter,” a sculpture that sits inside the stadium’s northeast entrance. Dean Weidner, an apartment developer for whom the stadium is named and who grew up in Colorado Springs, funded the $4.5 million sculpture as a gift to the city.

The sculpture was driven by the desire to provide a strong connection between the stadium and the city’s efforts to redevelop downtown. The structure fills that need as an entry statement, said Andy Barnard, Perkins & Will principal and managing director.

Robin Ault, Perkins & Will design director, provided the original concept sketches for the sculpture with assistance from Martin/Martin Consulting Engineers and Springs Fabrication, which completed that piece of the project.

The sculpture consists of a stainless steel sphere and two large rings with LED lighting that hover above that piece. It stands 35 feet tall and is 65 feet in diameter. The design theme took inspiration from the Olympic logo in a city that national governing bodies for several Olympic sports call home.

“The Olympics are prevalent here, but we couldn’t do anything directly related to it,” Barnard said. “Obviously, when you talk about rings and a sphere, there’s a sports connotation. We came up with the idea and developed it.” 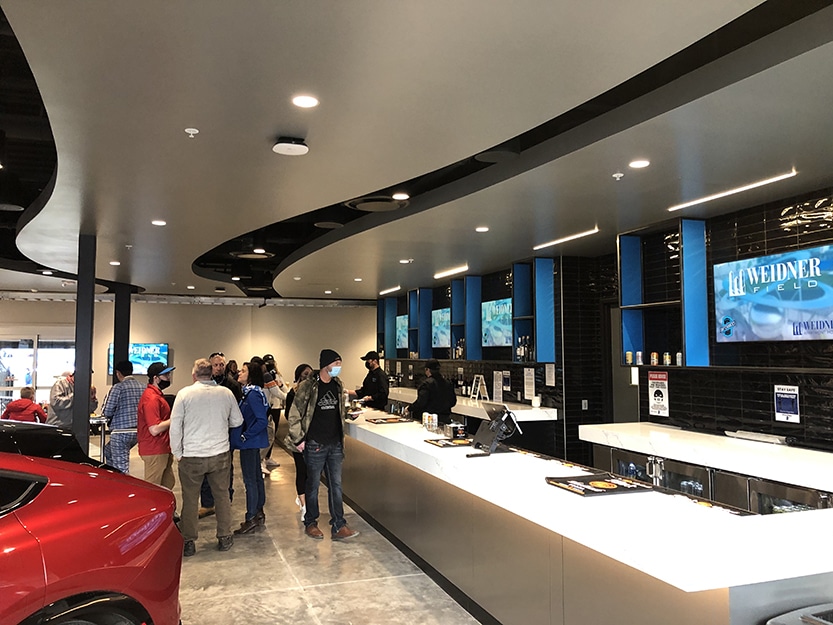 The Phil Long Field Club, one of three club lounges, is sponsored by a local automobile dealer. (Courtesy Perkins & Will)

Weidner also helped pay for constructing the facility. The city contributed funding, as well as the Switchbacks.

The team is owned by Ed Ragain, founder and former president of ME Engineers, a well-known industry brand that has worked on many stadium and arena projects over the past 40 years. Ragain’s family runs the team and the stadium. His son Nick is team president.

The initial vision was to build a 10,000-seat facility, but with a tight urban site on one city block, capacity was scaled down to 8,000 seats. Most of the building’s premium seats and multiple club spaces are on the west side, facing the videoboard, which sits at midfield on the east side.

It’s not the typical location for a stadium videoboard. Most screens are installed in the end zones at soccer venues. The Switchbacks wanted it placed at midfield to help emphasize the west side amenities, said Chuck Wittleder, Perkins & Will’s technical director and senior associate.

“It’s a little bit of a departure for sure,” Wittleder said.

Fans sitting on the east side flush with the videoboard have a direct view of a small LED ribbon board across the pitch on the west side.

There are three club lounges, including the Phil Long Field Club at pitch level, sponsored by a local auto dealer. There’s also the Founders Club on the concourse level and the Sky Club on the stadium’s third level, which will be marketed for weddings, banquets and corporate meetings.

The premium mix extends to 12 outdoor cabanas, plus party terraces on the northwest and southeast corners.

Trailheads SG, the team’s biggest supporters group, sits in Section 127, encompassing 105 seats in the south end. It’s known as “Base Camp,” in keeping with the state’s reputation for outdoor recreation, according to Wittleder. The term Switchback itself refers to the roads with hairpin turns climbing up mountain peaks.

Long term, development is planned around the stadium, including a Weidner Apartment Homes complex. It’s under construction south of the facility and will look down into the stadium. Retail shops will make up the ground floor of the apartment building, flowing into a plaza space connecting to Weidner Field, Wittleder said.