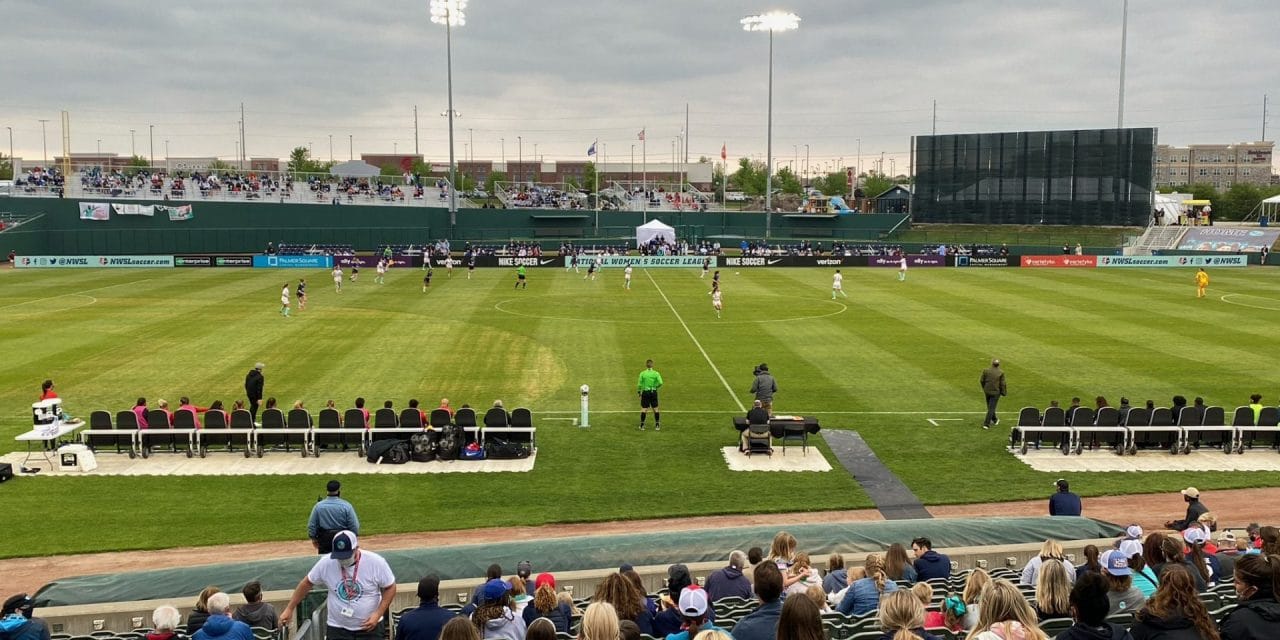 The Kansas City Monarchs, rebranded after the old Negro Leagues baseball team, and Kansas City NWSL, a National Women’s Soccer League club currently without a nickname that relocated from Utah in November, are co-tenants at Legends Field.

The ballpark, which turns 18 years old in June, is in Kansas City, Kansas. It’s part of the Legends mixed-use development, up the street from Children’s Mercy Park, home of Major League Soccer’s Sporting KC.

Chris and Angie Long, husband and wife and owners of the NWSL team, signed a two-year deal to play at the natural grass facility.

The Longs had conversations with Sporting KC about playing home games at Children’s Mercy Park but could not come to an agreement, according to Mark Brandmeyer, the Monarchs’ owner.

Angie Long said the vision is to build a new venue for the women’s team.

“Ideally, we would like to have a purpose-built stadium for this team, which would make it (among the first venues) for a female professional team in the U.S.,” she said. “We’re exploring a lot of different options, but obviously that takes time, so we’re a year or two away from that.”

On Monday, Kansas City played its first home game, a Challenge Cup tournament match that was relocated to Children’s Mercy Park because of construction delays at Legends Field.

The women’s team played a second Challenge Cup match May 3 at the ballpark. Its first regular season home game is May 26 against the Chicago Red Stars.

Kansas City is the second NWSL team in the market over the past four years.

FC Kansas City was among the league’s eight founding teams when it began play in 2013 at Swope Park in Kansas City, Missouri, where Sporting KC has its practice facility. In 2017, FC Kansas City moved to Sandy, Utah, and became the Utah Royals before returning to Kansas City after the Longs acquired the team. (Sporting KC is sharing Swope Park with the NWSL team for practices.)

Brandmeyer and the Longs have been friends for 15 years and their children attend the same school. The relationship led to a backup plan in case Children’s Mercy Park didn’t work out. Chris Long served as financial adviser to Brandmeyer, whose primary business is developing medical devices and materials such as ChloroPrep, a skin antiseptic. Brandmeyer sold the company in 2008.

“Chris called me late last year and said he was thinking about buying a women’s pro soccer team and would need a stadium to play in,” Brandmeyer said. “I told him we would do whatever we could to accommodate the team.”

“Had it not been for our friendship, we might have said no, because it’s a heavy lift to make that kind of change and commitment,” he said. “They’re good people and it’s the right thing for Kansas City. We need role models for our daughters to look up to. I have four.” 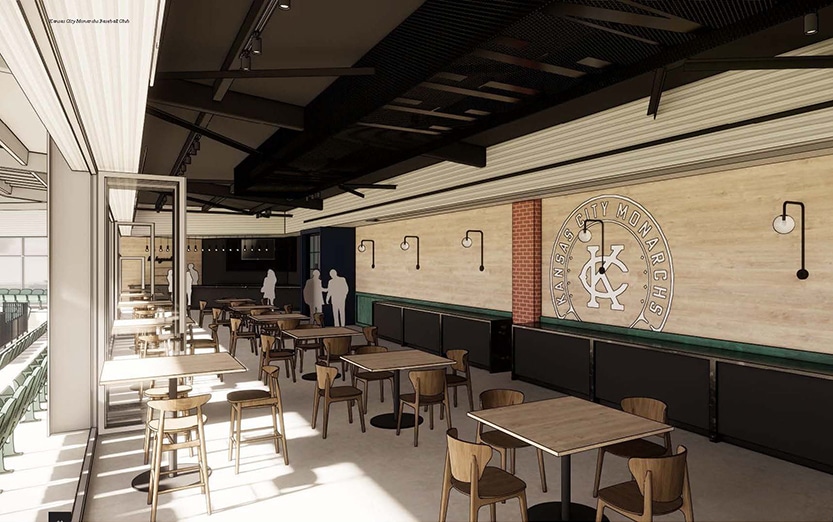 The minor league park opened in 2003 for the old Kansas City T-Bones, which became the Monarchs after Brandmeyer bought the team in October 2019. Two separate construction projects are near completion to transform a 7,000-capacity building into 10,000 seats for women’s soccer to conform with NWSL standards and get the stadium up to par for baseball. The Longs are investing a “significant amount” of money for soccer upgrades, but Angie Long would not disclose the amount.

As part of its research, Generator Studio, the architect hired by the Longs to design the retrofit, studied a similar project at Cheney Stadium in Washington, the home of minor league baseball’s Tacoma Rainiers. The NWSL’s OL Reign play there.

In addition, Legends Field, formerly CommunityAmerica Ballpark, was home to the old Kansas City Wizards for three seasons before the MLS team moved into Children’s Mercy Park, then Livestrong Park, for the 2011 season.

“We took some lessons from that history, particularly as it relates to pitch orientation and location,” said Peter Broeder, Generator Studio’s senior project designer. “It’s about 30 feet closer to the first base side than when the MLS team played there. Pitch seating is more significant in terms of capacity and amenities offered, and from a broadcast and lighting standpoint, too.”

To reach 10,000 capacity, the seating expansion translates to 500-plus pitch seats on the field of play and 2,500 bench seats installed along the concourse, mostly on the stadium’s north and east sides. Concourse seats could be used by the Monarchs this season, Brandmeyer said.

For soccer, the pitch seats are positioned as a premium product, which is outfield space for baseball. Those seats sell for $1,617 to $1,785 as an individual season ticket and include food and drink, according to the team’s website.

The pitch layout itself runs east-west. As a result, three permanent light standards for baseball must be shut off during soccer matches to avoid creating potential blind spots in the players’ line of sight as they run up and down the field. Supplemental light structures will be set up that don’t interfere with the athletes’ views, Broeder said.

The supporters section by the third base dugout will have great sightlines, right on top of the field of play, he said.

The key piece of the conversion from baseball to soccer is removing the pitching mound, which the old Wizards left intact when they played at the ballpark from 2008 to 2010. For the NWSL team, it takes three days to remove the mound and put it back in place, Brandmeyer said.

The process, which is done mostly by hand for both removing and rebuilding the mound’s clay and sand mix, should be streamlined after the first few conversions, he said.

Tyler Stelter, the Monarchs’ new head groundskeeper in charge of those conversions, came over from the Kansas City Royals grounds crew at Kauffman Stadium. Stelter has 10 years of experience, extending to brief stints with the Boston Red Sox and the Houston Astros, where he served an internship.

All told, the conversion will take place a half-dozen times, but project officials think it’s worth the additional labor, considering soccer fans are much closer to the action compared with the setup a dozen years ago, Broeder said.

“We spaced it out so they’ll be able to host two matches at a time,” Brandmeyer said. “The good news is our season ends Sept. 15 and their season continues into (late October). That’s been the tricky part of the whole thing from a baseball standpoint.”

As things stand now in Missouri during the pandemic, capacity for sports events is restricted to 50% at Legends Field.

The Monarchs’ home opener is May 18 against the Lincoln (Nebraska) Salt Dogs, part of a 56-game home schedule. They’re both part of the 11-team American Association, an independent league that has a partnership with Major League Baseball as part of the minors’ reorganization.

As part of renovations for baseball, the Monarchs removed eight suites down the third base line to develop the new Legends Club, a large indoor communal space tied to 120 fixed seats outdoors. For that premium space, Brandmeyer took inspiration from what the Royals did with the Diamond Club at Kauffman Stadium.

For the seven remaining traditional suites, officials added “soft seating” areas with couches and loveseats, a concept that came from CHS Field, home of the St. Paul Saints, which is now the Minnesota Twins’ Class AAA affiliate.

The old Heinlein Schrock Stearns, now part of HOK, designed the original ballpark. Brandmeyer said he’s working on a tight budget of $1.25 million to improve the venue for baseball alone.

“The previous team owners didn’t do much to the stadium and it has fallen in significant disrepair,” Brandmeyer said.

“We’re doing catch-up on preventive maintenance,” he said. “One of the things we did that will really change the ballpark feel is, being the Monarchs, we repainted the stadium to Fenway and Wrigley green. It will feel more like that (retro theme) than what it felt before.”