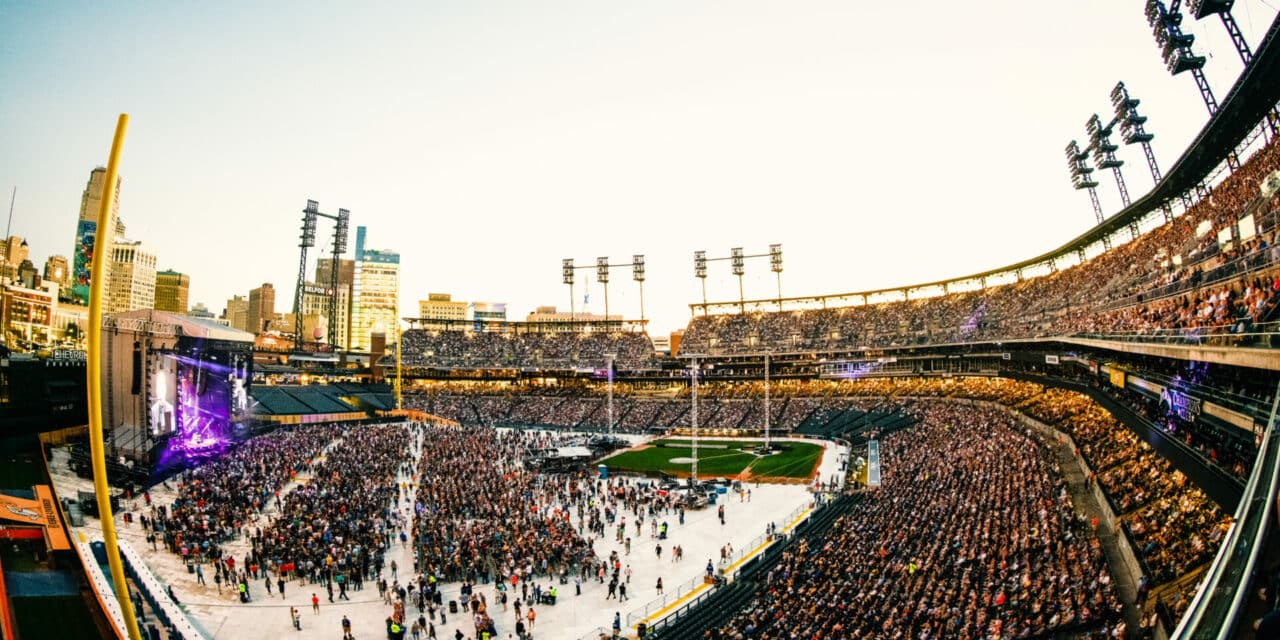 The final out of the Detroit Tigers’ 8-2 matinee win over the Cleveland Guardians on  July 6 — a Steven Kwan groundout to second base — ended the game, but not the activity at Comerica Park.

As the stadium cleared, scores of local theatrical stage crew members moved in to prepare for a triple-header — three consecutive nights of concerts, a first for the 22-year-old building, with a fourth show looming less than two weeks later.

The weekend lineup was formidable. Chris Stapleton’s All-American Road Show opened things up on Friday night, July 8, with Nathaniel Rateliff & the Night Sweats added to an amphitheater bill that included Marty Stuart & His Fabulous Superlatives and Madeline Edwards. Billy Joel was on tap for Saturday, July 9, a show that had been announced 1,052 days before and delayed twice by the pandemic. The Def Leppard/Mötley Crüe-headlined The Stadium Tour, also pushed back twice from its original 2020 date, wrapped things up on Sunday, July 10.

Elton John’s “Farewell Yellow Brick Road: the Final Tour” was on the boards for a July 18 stop at Comerica, making for four concerts in 10 days.

In addition to John’s show, the ballpark will host a fifth concert —the Red Hot Chili Peppers on Aug. 14 — marking the most ever in one calendar year at the facility. 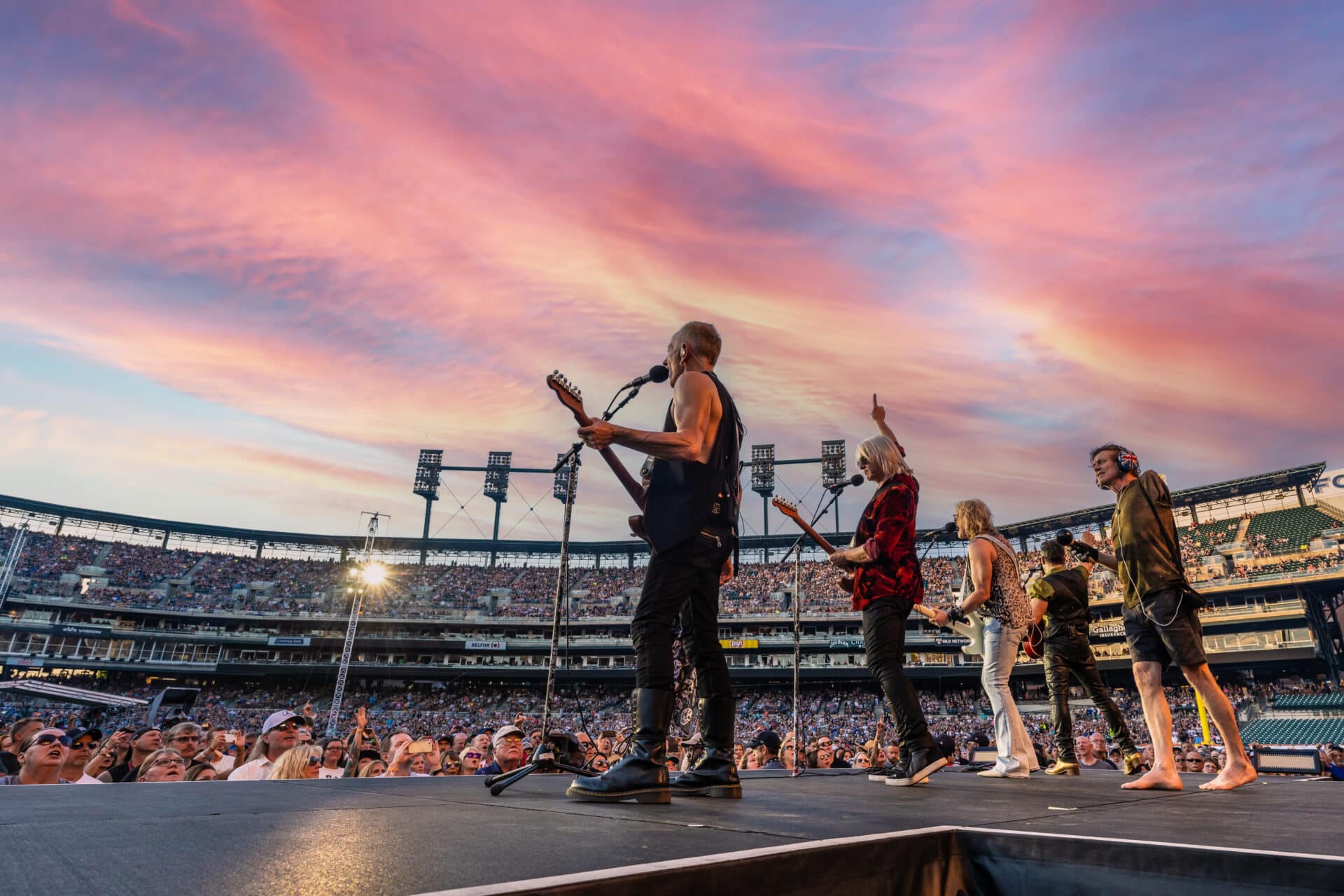 “Y’know, this is what we live for,” 313 Presents President Howard Handler said from his office at nearby Little Caesars Arena. From his window, he could see the eight trucks carrying the G2 Structures stage used for the three weekend shows waiting for the green light to enter the stadium. “This year we’ll do about 350 shows across our six venues, but we zero in on the summer, and the very core of the summer is these ballpark shows. They’re the biggest. They’re the most complicated. They’re among the most highly anticipated shows. This is what we’re really in preparation for.”

“There’s a lot of shows during the rest of the summer” — including four others at 313 amphitheaters the same weekend — “but these three shows together are probably the peak of our summer,” Handler added.

The logistics are daunting, but 313 Vice President of Entertainment & Production Elmer Straub said there are abundant production benefits to putting on the shows back-to-back-to-back.

“It’s an undertaking because they’re three solid acts, all big, solid players,” Straub explained. “But it does make it a little more efficient when you have one going into another — the stage is in place, the floor is in place, you only have to set the chairs once. There may be a different manifest for each show, but the differences in them are not that huge.”

Dave Clark, president of Live Nation’s Great Lakes Region, said good fortune played a part in the endeavor. The Tigers we’re on the road for 11 days in front of the All Star Break, creating a bigger window in for other events at the stadium. Playing a day game prior to the road trip  was also crucial.

Joel’s longtime production manager, Bobby “Boomer” Thrasher, who lives about one hour west of Detroit when off duty, said “after a baseball game ends, it normally takes three days for the production to come in and get set up. With this we did everything in a day, working around the clock.”

Catering, for the record, served nearly 3,000 meals during the nearly six days involved.

Preparations began at 6 p.m. on July 6. A crew of about 350 began laying 110,00 square feet of ventilated floor covering around the outfield, along with 400 feet of bicycle rack surrounding the Comerica Park infield, with its Tigers logo olde English D’s on the mound and behind home plate.

The stage was assembled by mid-day on July 7, and sound and lights were hung and ready for the Stapleton tour to load in the following morning, after playing the night before at Blossom Music Center near Cleveland.

Joel’s production was key to helping make things move better. Because the Piano Man doesn’t tour in the traditional sense, playing monthly shows at New York’s Madison Square Garden and sporadic stadium dates during the summer, his Clair Global light and sound rigs were available, as was Thrasher.

“We put up our sound system for Stapleton,” Thrasher said. “They’re carrying the same thing, so it’s silly to put one up and tear it down just to put up the same thing. We’ve done this many times, with many venues.” 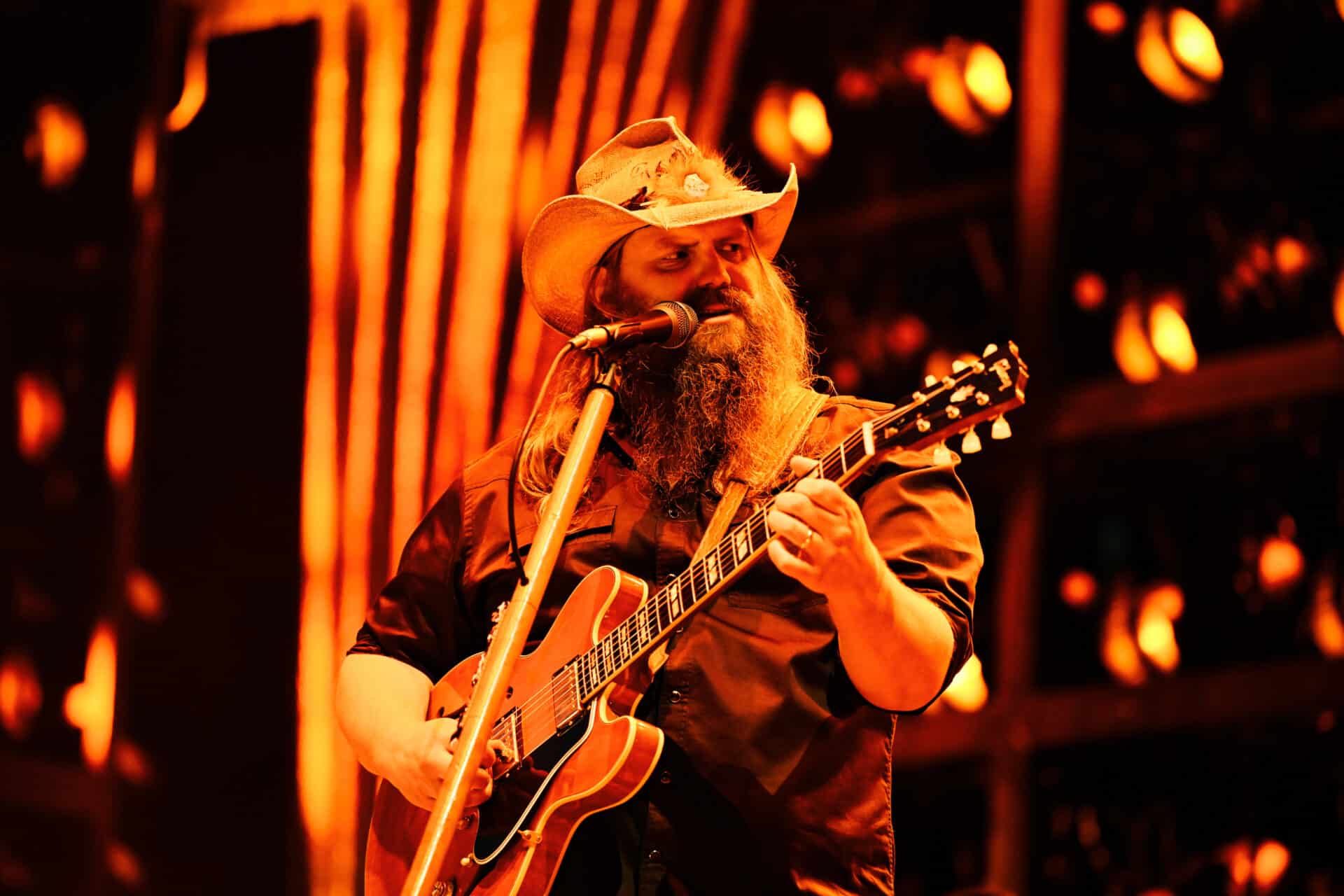 All of that helped make the transitions from one show to the next work smoothly.

Live Nation’s Clark said, “With that stage done and the field being completely prepped, the second and third shows are more akin to coming into an arena and setting up your staging and gear rather than having to rebuild before each show.”

Thrasher said those economies of scale are common practice as promoters and stadiums work to group shows together throughout the baseball season.

“It happens this way more and more,” Thrasher said. “There’s a show the night before ours and sometimes the night after. Last year Fenway did five shows in (six days). Everybody’s used to making it work.”

In the end, it was a smooth weekend, with more than 100,000 fans attending the three shows; only The Stadium Tour encountered any problems, a lengthy wait to get in because so many of the more than 36,000 fans came were early arrivals.

On stage, Rateliff and company added some value-plus to the Stapleton package with an hour of brassy soul-rock embraced by the country-leaning crowd, while Def Leppard frontman Joe Elliott took advantage of an off night from The Stadium Tour to join Joel as a surprise guest for a rendition of his band’s “Pour Some Sugar On Me,” which the two have performed before in New York and Boston.

Joel and The Stadium Tour acts expressed appreciation for finally being performing their shows after the two-year wait.

“Who the hell knew this was gonna happen?” Joel asked after thanking those purchasing tickets in late 2019.

Poison’s Bret Michaels declared the following day that, “this is the party I needed, right here! I cannot stop smiling right now. I’ve been waiting for two years to come out and party.” Elliott said near the start of Def Leppard’s performance that, “We’re finally here. After two years of waiting, we finally made it. Thanks for waiting for us.”