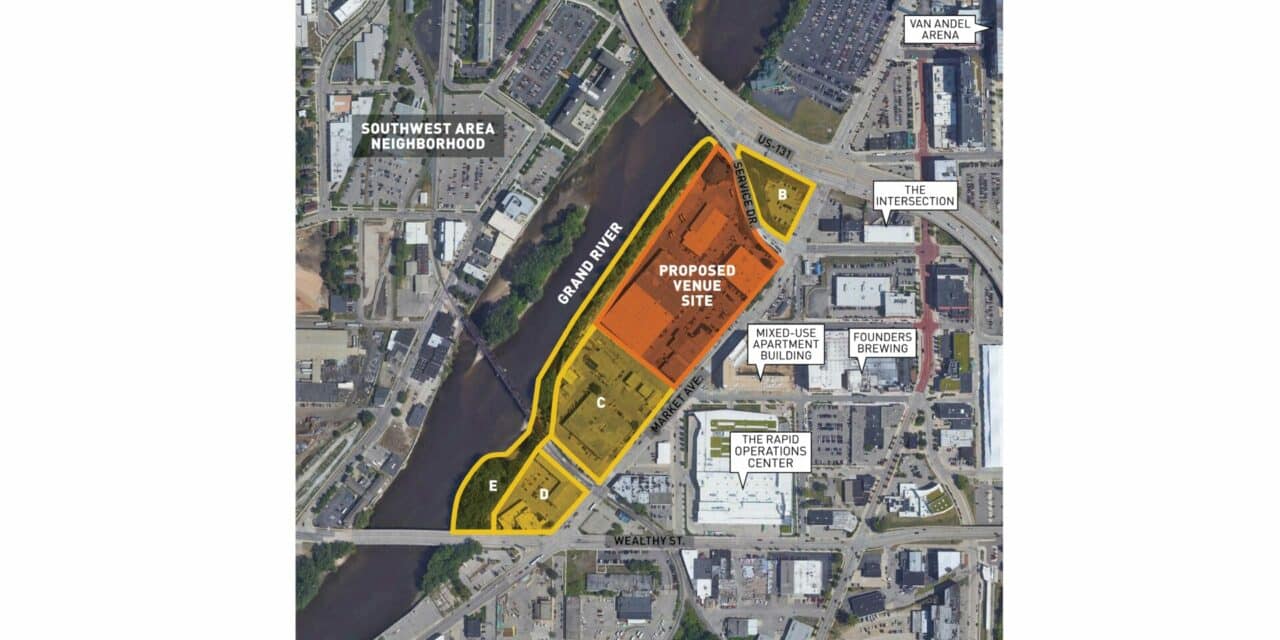 TAKE ME TO THE RIVER: A new amphitheater proposed in Grand Rapids, Michigan could potentially lead to other development along the city’s riverfront. (Diagram courtesy Rossetti)

The proposal to build a new amphitheater in Grand Rapids, Michigan tied to mixed-use development reflects the same business model sports teams use to build arenas and stadiums across the country.

Detroit-based Rossetti, a sports architect with experience renovating Pine Knob and Meadow Brook amphitheaters, is in the concept design phase, which should be completed by early September for a 12,000-capacity outdoor music venue, company officials said.

As it stands now, about one-quarter of total financing for the $116 million amphitheater is in place, a cost which includes land acquisition, according to local reports. Earlier this month, the state of Michigan committed to provide $30 million in funding. Additional financing is expected to come from private donors and bonds issued by the city.

Matt Rossetti, president of the design firm that bears his family name, believes the downtown riverfront amphitheater is among the first venues of its kind to anchor mixed-use. In this case, the future development of 31 acres extends to office space, a hotel, a park filled with hiking trails and 1,700 to 2,000 residential units.

“This is our Hudson Yards,” said David Frey, co-chair of Grand Action 2.0, the nonprofit economic development group spearheading the project. The organization spun off of Grand Vision, which is responsible for many of the city’s major developments, starting with Van Andel Arena, a Rossetti project which opened in 1996.

Frey, a retired banker, chaired the original group in the early 1990s that developed the arena, DeVos Performance Hall and DeVos Place Convention Center. For years, the city “turned its back” on the Grand River, and the goal is to convert the waterway into the city’s “front door, not our back door and become part of the urban fabric,” he said.

“There’s nothing like it; I love the fact that it’s got so much energy and activity around the borders,” Rossetti said. “We benchmarked every single amphitheater in the country and we kept adding filters to narrow it down to the right site, with an urban mix along the water. We’re painting a big vision for Grand Rapids.”

Van Andel Arena alone has proved its value for Grand Rapids. Over the past 26 years, the 12,000-plus seat arena, run by ASM Global and before that SMG, has sold 5.2 million tickets from 734 concerts and family shows, according to VenuesNow/Pollstar data, The building historically ranks  among the busiest indoor venues of its size in North America.

Under the framework of the amphitheater development, the Grand Rapids-Kent County Convention and Arena Authority, landlord for the arena, DeVos Performance Hall and DeVos Place Convention Center, would fill a similar role for the new concert venue.

ASM Global runs the performing arts center and convention center as well as the arena. The current plan calls for an amendment to the company’s contract that extends to operating the amphitheater, said Rich MacKeigan, ASM Global’s regional general manager. MacKeigan has run Van Andel Arena for 24 years.

“The amphitheater is the sexy piece, but it’s just the first domino for a major development for downtown,” MacKeigan said.

In addition, Live Nation could potentially invest in the amphitheater and have a role in running the Meijer Gardens amphitheater, Frey said. The 1,900-capacity venue is owned by a local nonprofit.

If all goes as planned, the new amphitheater would open for the 2024 summer concert season, Rossetti said. For the overall development, some public works buildings would need to be torn down, said Kevin Karbo, a spokesman for Rossetti and a former Grand Rapids resident.

The amphitheater, facing south, features 7,000 fixed seats and a 5,000-capacity lawn. Blueprints call for 16 different premium products between suites and opera boxes, which would connect to retail and other entertainment spaces activated outside the facility.

A parking garage would sit beneath the elevated lawn section. The west side, which faces the Grand River, would provide views to the city’s downtown district.

“We’re tucked into a tight site with the Grand River on one side, the freeway interchange on the north and housing and other buildings on the east and west sides,” Rossetti said. “What’s cool is on the north side, where the load-in and the bandshell will be, there will be a hotel/residential tower that’s literally sitting in the (commercial) air rights above. It’s woven into the top.”

As a firm, Rossetti conducted market research in-house to determine the feasibility for building an amphitheater in Grand Rapids. The Grand Rapids-Kentwood metro population tops 1 million residents, according to Rossetti data.

Considering Van Andel Arena’s impressive numbers, a bigger shed would perform well in the state’s second-biggest city and sets it apart for a community situated about halfway between Detroit and Chicago.

“There’s huge demand in the market,” Rossetti said. “We’ve been working on this for about a year. This project, as well as 5,000-seat indoor venues, are going crazy. That’s the (size) people want to be in for that intimacy.”