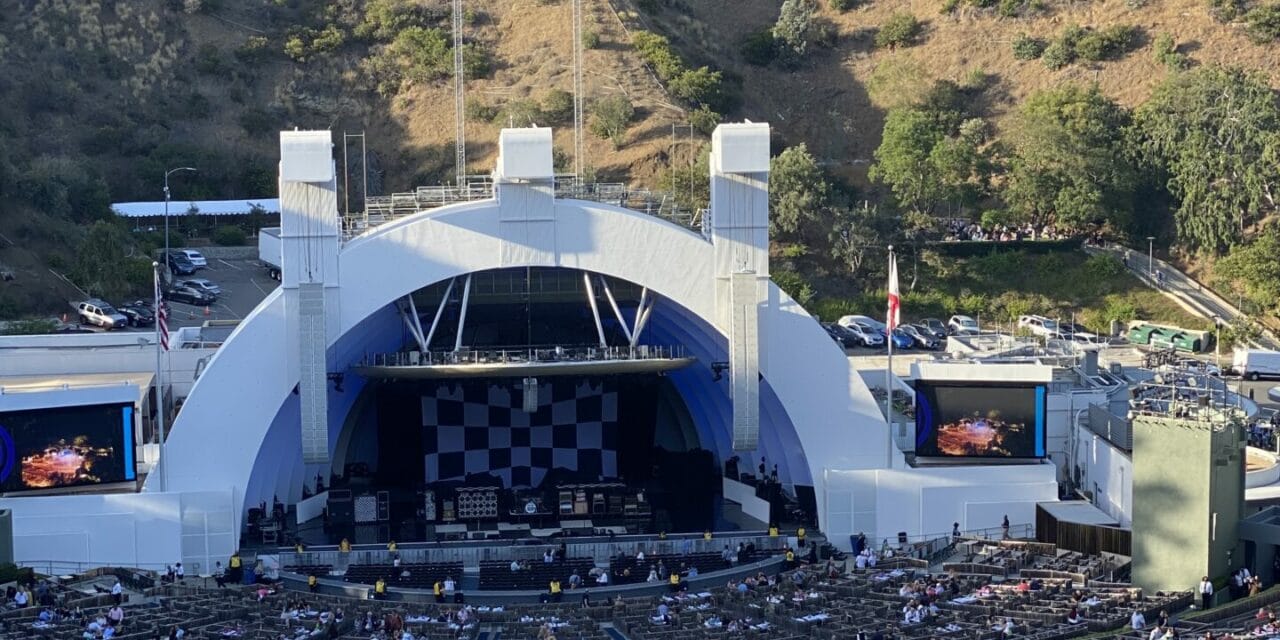 CHEAP SEATS: It’s a million-dollar view from the top of at the Hollywood Bowl, with views to the iconic ‘Hollywood’ sign across Cahuenga Pass. (James Zoltak/Staff)

LOS ANGELES — Three hours before Rod Stewart took the stage June 14 at the famed Hollywood Bowl to launch his 2022 North American tour, soundcheck strains of “Maggie May” wafted from the stage, much to the delight of scores of guests waiting outtside the gates.

Sipping drinks, dining on boxed meals and picnic items they packed themselves, visitors in T-shirts honoring Stewart and opening act Cheap Trick soaked in the excitement in the park-like setting outside the Bowl.

A few trickled into the compact Hollywood Bowl Museum, where admission is free and visitors can view images and models of what was once known as Daisy Dell and the various iterations of the Bowl and its iconic bandshell. They could also listen to past Bowl performances by Ella Fitzgerald, The Beatles, the LA Philharmonic Orchestra and Pink Floyd.

Ever the gentleman, Stewart patiently posed with the politician and with Bill Silva and Andrew Hewitt, longtime Hollywood Bowl promoters now with Live Nation, as well as Live Nation’s Rick Franks and Stewart’s agent Dennis Arfa.

When gates opened one hour later, what’s billed as the world’s largest natural amphitheater began to slowly fill with some fans making their way into the suites of orchestra seats. Wait staff delivered bottles of wine and high-end food items from concessions and catering partner Sodexo Live! 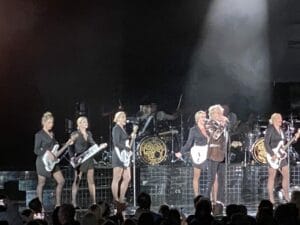 General concessions are available, but most guests in the best seats appeared to be going all in on elaborate fare like sushi rolls; smashed carrots and marinated beets with tahini yogurt, dandelion and toasted seeds; or veal osso buco with saffron risotto, asparagus, pea shoots and meyer lemon salsa — items more likely to be found at a Beverly Boulevard bistro than an 18,000-seat shed.

In addition to Supper at Your Seat options, the grounds have several picnic areas with benches and tables that are available on a first-come basis.

After Cheap Trick’s 60-minute set whetted the appetites of a crowd dominated by enthusiastic baby boomers, Stewart delivered on a grand scale with a run through his five decades as a rock and roller, crooner and balladeer.

It’s hard to imagine anyone wasn’t treated to their favorite Stewart hit after the savvy showman and his band, which featured a troupe of female vocalists, violinists and a harpist who took up guitars for the opening number of the main event: a dead-eyed Robert Palmer-esque rendition of “Addicted to Love.”

Still able to muster high notes when he has to, Stewart delighted a crowd that turned out to be as full as the Strawberry Moon that rose above Cahuenga Pass with faves like “Do Ya Think I’m Sexy,” “Some Guys Have All the Luck,” “Young Turks,” “Forever Young” and even the Crazy Horse ballad “I Don’t Want to Talk About It.”

Between numbers, when he wasn’t cracking jokes, lauding his bandmates or thanking the crowd for spending some of their hard-earned cash to come see him, the legendary performer drop kicked and threw soccer balls to his adoring fans.

Numerous costume changes punctuated the performance and at one point Stewart left the stage as the backup singers belted out a spirited rendition of Blondie’s “Call Me,” but the “Ooh La La” factor never wavered as the crowd danced and sang its way through Stewart’s two-hour set.

The night ended as so many do at the Hollywood Bowl, with most fans waiting for stacked parking to clear the lots. Paying to valet park is one way around the worst of that, but that part of the experience continues to be the only obvious downside to taking in a show at a venue, similar to multiple amphitheaters across the country.