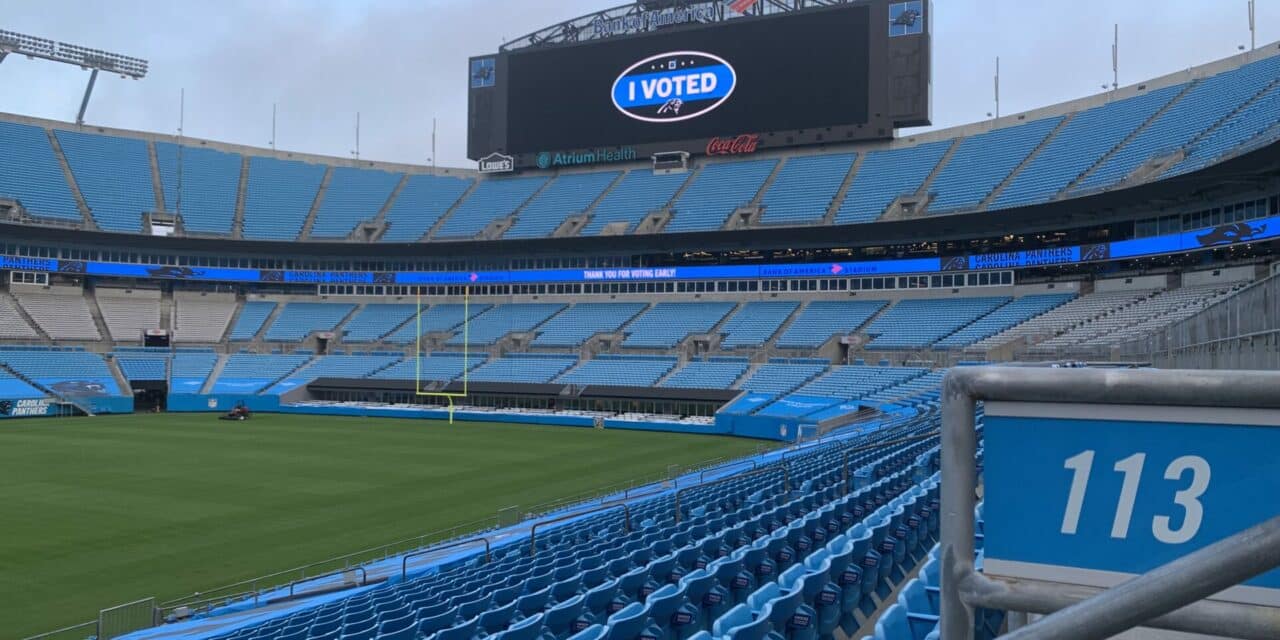 GET OUT THE VOTE: Bank of America Stadium, home of the NFL Carolina Panthers, will host 17 days of early voting beginning Oct. 20. (Courtesy venue)

As arenas and stadiums develop new ways to engage their local communities, a growing number are opening their doors as voting centers and polling places for the upcoming midterm elections, offering fans a different experience than the typical church or school setting for casting their ballot.

In 2020, nearly 13,000 residents voted at Bank of America Stadium in Charlotte, North Carolina, and the stadium will be used again as an early voting site this fall for the mid-terms after being approved by the Mecklenburg County Board of Elections.

The stadium, which is home to the NFL Carolina Panthers, will host 17 days of early voting beginning Oct. 20, which overlaps with one home game against the Buccaneers on Oct. 23.

Carolina Panthers president Kristi Coleman said the decision to be a voting location is consistent with the organization’s efforts to increase participation in the democratic process. “This non-partisan effort aims to make the voting process as easy and convenient as possible for our community,” Coleman said. 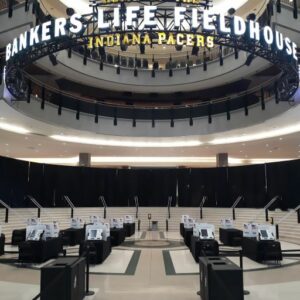 PACEFUL TRANSITION: Gainbridge Fieldhouse in Indianapolis, home of the NBA Indiana Pacers, was a voting center for the first time in 2020. (Courtesy Venue)

The team is also supporting non-partisan voter registration efforts in North and South Carolina to increase voter participation. “You Can Vote” will be on site to register voters at the Panthers’ next two home games on Oct. 9 against the San Francisco 49ers and Oct. 23 against the Tampa Bay Buccaneers, said Ryan Anderson, spokesman for Tepper Sports and Entertainment, owner of the Panthers and Major League Soccer’s FC Charlotte.

In 2020, Gainbridge Fieldhouse in Indianapolis, Indiana, home of the NBA Pacers and WNBA Indiana Fever, was a voting center for the first time and they are back in 2022 serving Marion County.

They worked “hand in glove” with local and state government election officials including the Secretary of State in 2020 to make sure they had the appropriate set up, accommodations for security and COVID safety protocols as well as plans for foot traffic in and out of the fieldhouse.

“Logistically, it was challenging to get all of those things worked out,” said Danny Lopez, vice president of external affairs and corporate communication for Pacers Sports & Entertainment.  “This year will be easier and smoother because we’ve don’t it so successfully before.”

The 20,000-capacity venue is coming off of a three-year expansion, which is the among the NBA’s biggest renovation projects. Making the commitment to take on the duties of a voting center reflected the values of the organization and the wishes of the players.

“We had lot of conversations as a company, every organization had, and we wanted to be more proactive in the things the players cared about,” Lopez said. “As an organization, we knew that that meant access to voting and we were centrally located in downtown, so we were engaged and participating in the process. It gave people around downtown a chance to vote in a cool venue.”

Designed to represent an old Indiana hoops gym, Lopez said there is a lot of civic pride wrapped up in voting at the venue. “People were very excited to be in this kind of environment for an election, which are typically in a church, community center or school,” he said. “So, this was a pretty neat background for a lot of people and we are happy to be doing it again.”

The venue typically attracts 2 million visitors annually and adding voting center to the mix was a natural choice for the organization.

“We have a unique relationship the city government and state government,” Lopez said. “We work in a close, non-partisan way on these type of initiatives. We are aware as an organization – from our leadership down — that this is firmly our commitment and we are embedded in this community and engaged.”