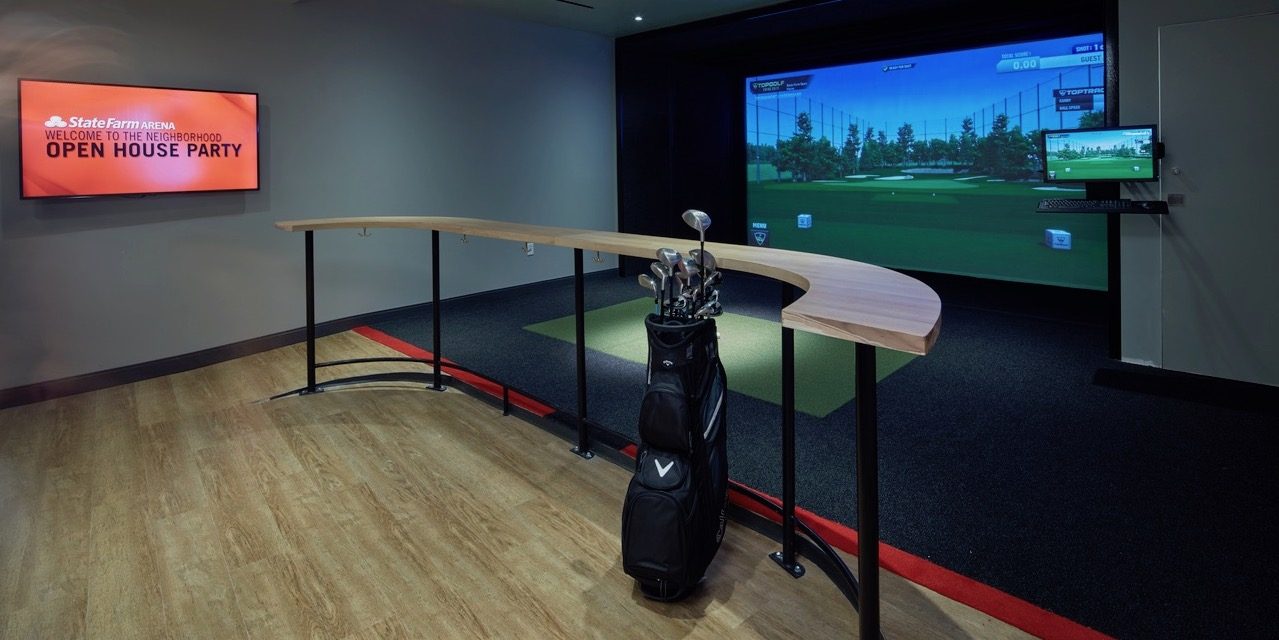 Company looks for foothold in developments near venues

Delaware North has partnered with Topgolf to open multiple Swing Suite simulators in Atlanta, Boston and Green Bay, Wis., all part of mixed-use developments tied to sports venues in those markets.

The Hub on Causeway surrounds TD Garden, the Boston arena where the NHL’s Bruins and NBA’s Celtics play. Delaware North is a developer and the operator of the development; it also owns and operates TD Garden and owns the Bruins.

Topgolf Swing Suites patrons use real clubs to hit golf balls into a big screen that’s part of an interactive display. The system tracks each shot’s accuracy and distance, and it awards points for hitting targets.

Two of the three indoor attractions open this fall, including the Hub on Causeway’s three Swing Suites.

In Green Bay, in a project that was announced in April, seven Swing Suites are planned as part of a restaurant Delaware North will operate at the Titletown district across from the NFL Packers’ Lambeau Field. Sterling Project Development, the real estate firm owned by the Wilpon family, owner of the New York Mets, is a partner with Delaware North in the Titletown project.

In Atlanta, the Swing Suites will be part of the Battery district next to SunTrust Park, home of MLB’s Atlanta Braves, and will open at a later date, Jacobs said.

It will be the second Topgolf installation connected to a sports facility in that market. Last year, State Farm Arena, where the NBA’s Atlanta Hawks play, opened two Swing Suites on the corners of a premium level along the building’s west side.

For Delaware North, partnering with Topgolf is part of its strategy for finding a niche in the entertainment districts being built near arenas and stadiums, to help drive revenue and keep those facilities active year-round for teams and developers forming those districts.

“We’re looking at how we can play in these developments outside the venue walls, to see whether there’s a role for us,” Jacobs said. “Obviously, we would love to have the bar business (in those districts), but often that’s already been grabbed up. We’re looking for areas we can participate, get a sense of the marketplace and the customer and see how we do.”

Apart from those three markets, Delaware North could potentially expand Swing Suites to its other food service accounts across the big leagues as well as the mixed-use developments connected to sports facilities.

“We think it’s adaptable and scalable; we just have to find out if the customers like it or not,” Jacobs said. “That’s the big question mark. It hasn’t been fully commercialized yet.”

Across the country, Topgolf Swing Suites have opened at Patriot Place in Foxboro, Mass., the retail and entertainment district next to the NFL Patriots’ Gillette Stadium, and at the NFL San Francisco 49ers’ Levi’s Stadium, inside Michael Mina’s Bourbon Steak & Pub restaurant.

In addition to golf, the simulators feature other games such as Zombie Dodgeball, plus hockey and baseball games.

In most cases, Topgolf charges the venues a licensing fee to use its products, and in some cases, there’s a revenue share agreement, company officials said. In an interview last year with VenuesNow, Ron Powers, president of Topgolf’s Swing Suite group, said the company pays for the roughly $100,000 expense for the installation, which covers the technology, equipment and shipping costs. The teams and investors pay for finishing the space in a manner consistent with their facility.

Overall, there are now more than 45 Topgolf Swing Suite locations in the U.S., at bars, restaurants, hotels, casinos and fitness centers, in addition to sports venues.

Some portions of the Hub on Causeway, Delaware North’s own $1.2 billion mixed-use development, are now open, said Charlie Jacobs, CEO for Delaware North’s Boston Holdings. Rapid 7, a cyber software security vendor, opened its office July 15 in one of three towers surrounding the arena.

Other bits and pieces open this month and into October before hockey season starts, Jacobs said.

All told, the project encompasses 1.5 million square feet of development. The third and final phase, which opens in 2021, includes Verizon opening a hub of innovation in a 40-story structure that sits on top of the arena. The technology and communications firm will lease 440,000 square feet within the tower. Real estate developer Boston Properties is a partner in the Hub on Causeway.

As of late July, Delaware North was about halfway through a nine-week $100 million construction project at TD Garden, which includes replacing seats, upgrading acoustic upgrades and expanding locker rooms and weight and conditioning spaces for the Bruins and Celtics.

At the top of the arena, on Levels 8 and 9, officials relocated mechanical equipment to free up space to develop a mix of premium hospitality and SRO spaces for young professionals. Combined, the two floors now feature a party deck and the Rafter Studios, group spaces that can accommodate 20 to 200 people.

“We’re cantilevering Level 9 (at the top of the building) with several rows of seats that will hang out right above the ice,” Charlie Jacobs said. “We’re building a club there as well called the Boston Garden Society. It’s really aimed at millennials that maybe don’t want to buy a $50 ticket but still want to come to a game. That transformation will be done by October. We’re selling memberships to the club and are close to sold out.”