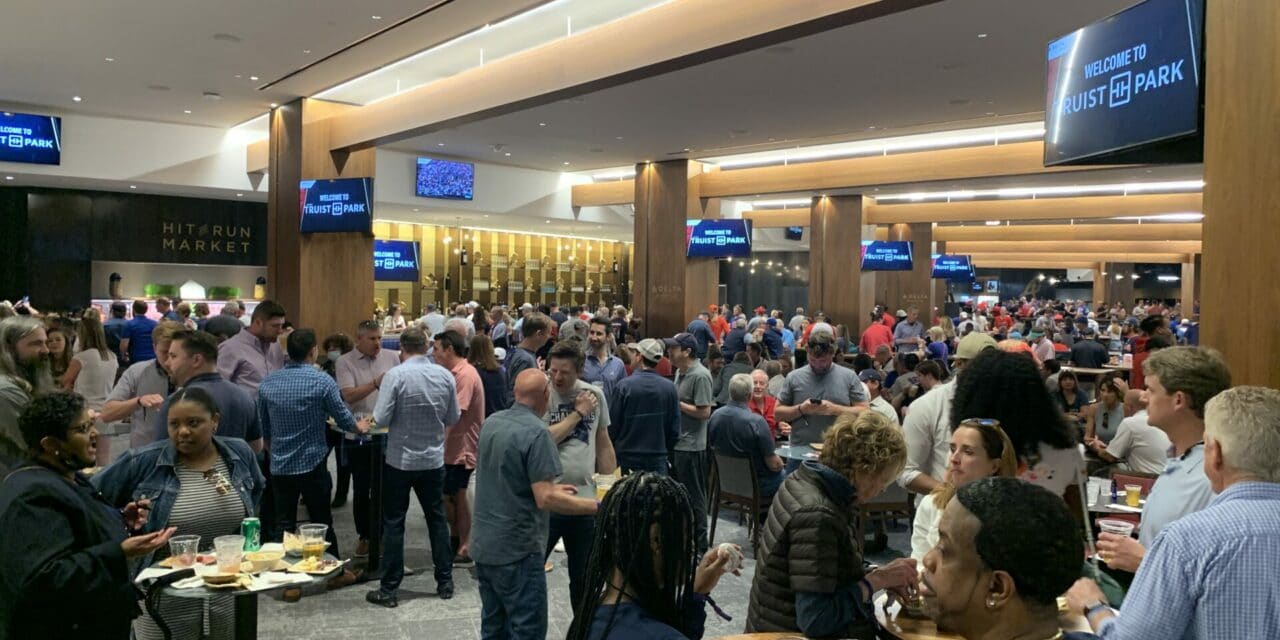 ATLANTA — The revamped Delta Sky360 Club was rocking as the Atlanta Braves played host to the Chicago Cubs on a gorgeous late April night at Truist Park. There’s now plenty of elbow room and dining space after a $6-plus million offseason expansion and redesign of the club.

The ballpark opened in 2017 and it’s not often that a premium club goes through a total renovation that early in the life cycle of a big league stadium. Take into account the pandemic, and in reality, the club has been in full operation mode for about three and a half years.

But when the club gets so crowded that some fans paying $17,000 to $22,750 individually for an all-inclusive season ticket are forced to sit on the floor to eat and drink, something must be fixed.

That was the case inside the Delta club at field level, tied to 1,700 seats behind home plate, according to team president Derek Schiller.

It took awhile for the Braves to recognize the trends for how season-ticket holders use the park’s premium spaces. Turner Field, where the Braves played from 1997 to 2016 before moving to Truist Park (initially SunTrust Park), had few club seat options, so there wasn’t a whole lot of data to analyze market trends. Truist Park has multiple club seat products and for the 2021 season, those 4,000 seats are sold out for the first time since it opened.

The original layout of the Delta club, measuring 10,000 square feet, featured buffet-style dining, standard circular-shaped banquet tables and a large bar in the middle of the room.

Five years ago, it was functional, but over time, as the Braves learned the behavior of those customers, coupled with the increased demand for premium seats, they embarked on the most extensive capital project since the park opened.

“The Braves are different,” said consultant Mike Plutino, whose firm Food Service Matters worked on the project. “They’re obsessed with the fan experience. The original layout was problematic. They were intent on seeing if (new) design could solve it and luckily it did.”

Fan surveys shared a common concern about congestion. Delta club patrons loved their seat locations in the bowl, but otherwise, it was a tight fit as they struggled to move about the club behind their seats to eat and drink.

“It was definitely a pain point,” said Hannah Basinger, the team’s senior vice president of operations. “It was beautiful when it opened. It had a few ‘neighborhoods,’ but it became more compartmentalized and a little choppy.”

To resolve those issues, the Braves brought in Populous, the stadium’s original architect, which in turn hired Food Service Matters, based in Atlanta. Delaware North Sportservice, the Braves’ concessionaire, was also involved in the project.

A big piece was simply knocking down walls to create more space. It helped that Populous, led by principal Brad Albers, already knew what was behind and underneath those walls. It was key considering the construction schedule was compressed by one month after the Braves went deep into the playoffs and won the World Series in early November.

All told, the project added 8,800 square feet to the club, most of which was previously service level areas. Kitchens were redesigned. The buffet service and old dining setup were scrapped in favor of action stations lining the perimeter of the club where chefs serve freshly-prepared foods on small plates. Fans congregate at small tables and high tops. The bar in the center of the club was moved to an outer wall.

The lengthy Gold Glove Bar along one wall features Gold Glove awards won by Braves players over the years for their fielding prowess. Those trophies are among the few leftovers from the original club design. The Silver Slugger awards previously on display were moved other locations in the ballpark. 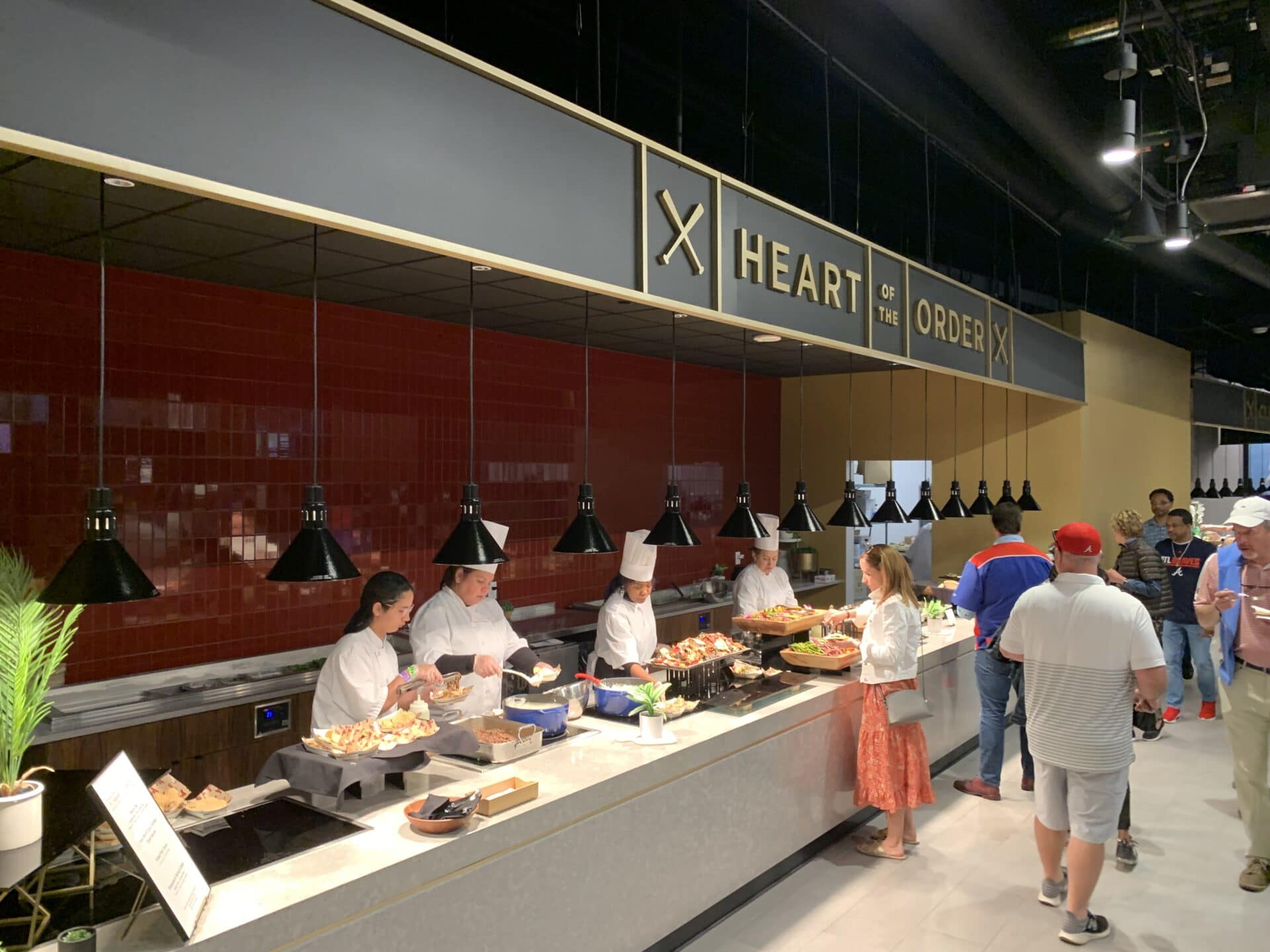 Toward the back of the club are grab-and-go displays with standard ballpark fare, snacks and a candy station, as well as a Jostens pop-up store for fans to buy their 2021 World Series with options to fit most budgets.

The old merchandise stand in the club was tucked away behind the concierge desk at the front entrance. It’s been relocated along a wall leading to the main dining room and the increased exposure has the club’s retail component already outperforming all of last season, Basinger said.

Overall, the result is a more enjoyable experience as fans roam the action stations in a room close to twice the size as the original setup. One month into the 2022 season, they’ve given the Braves a thumbs-up on the openness and the variety of foods offered at multiple locations.

“We created a flow in the space that’s more dynamic,” Schiller said. “People are no longer coming there and thinking about a sit-down dinner. It’s more ‘take a look over there,’ and ‘go to the bar and have a drink’ and ‘let’s stand at a table.’ All those things have made the experience 10 times better than it was before.”

Apart from the Delta Sky360 Club, the Braves have replaced 5,000 cushioned seats that got moldy outdoors from exposure to the elements and upgraded table top seats from wood to a laminate surface at the Coors Light Chophouse in right field.

The beer chillers integrated into those table top seats, a new feature at MLB parks back in 2017, were also replaced as that technology wore out over time.

In addition, Xfinity, Comcast’s digital technology brand, took over naming rights of the former Infiniti Club, situated midlevel in the ballpark, one level above the Delta Sky360 Club.

Initially, it sponsored the Xfinity Rooftop Lounge in the upper deck portion of right field with cabanas, ping-pong, foosball and cornhole, plus a Waffle House outlet, but the brand was better suited for a club space, Schiller said. The rooftop lounge will be redeveloped at a later date.

“One of the things that all of the architects we talked to when we were doing the very first design of the ballpark said was ‘You’re never going to be done renovating,’” he said. “Even after your first year, you make tweaks; some are small and some are large. The success of the premium environment in this ballpark necessitated it.”