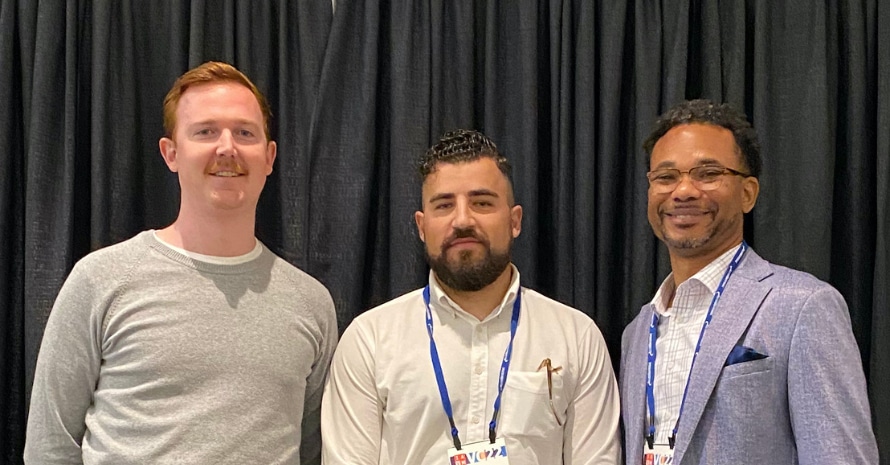 Where did all the workers go?

PHOENIX — Some people just don’t want full-time jobs, preferring independence over a steady paycheck. Others value paid vacation time more than wage increases. Still others only want to work on their very own custom schedule.

Welcome to the evolving world of venue and event staffing.

But instead of bemoaning the seemingly new gig economy, tools are available that make it easier to get enough boots on the ground to prepare for crowds and to handle various tasks once the gates open.

Ongoing staffing shortage issuesand new ways of getting enough people hired, trained and in place to handle events was a hot topic at the International Association of Venue Managers’ annual VenueConnect convention and trade show at the Phoenix Convention Center last week.

“As we all know, there have been massive changes in the way we work,” said Nowsta CEO Nicholas Lillios, who moderated a panel entitled, “Paradigm Shift: The Venue Industry’s Evolving Workforce.”

“A lot of these changes were exacerbated by the pandemic,” Lillios said. “We saw evolving preferences in the workforce, but as many of us know, the challenges that we’re facing started well before the pandemic. There’s been an evolution for the last decade, starting with the rise of gig work, that has forced employers to look at and reconceptualize the way that they think about managing … their workforce.”

Nowsta is a staff management operating system whose tools “to hire, deploy and pay” hourly, gig or temporary workers are used by numerous arenas, stadiums and convention centers.

Other companies operating in the space include Instawork, which has a network of 600,000 vetted individuals across 24 U.S. markets, and Tend, whose CEO Davis Waddell joined Lillios on the VenueConnect panel.

Tend, which bills itself as “a premier marketplace for hospitality staffing,” works with venue industry companies like ASM Global, Legends and Sodexo. Its first stadium work was at Angel Stadium in Anaheim, California, in 2021 and the company also operates in convention and performing arts centers. according to Waddell.

Fattar Thomas, general manager with Delaware North Sportservice, who is based in Atlanta, said he has used as many as seven temporary staffing services at one time, instead of the usual two or three, to help meet venue staffing needs. Included in those are Tend, which went from being “a new kid on the block to providing the majority of our temporary staff.”

What led to Thomas, who also worked previously for Levy in Dallas and in Charlotte, North Carolina, being on the panel was the 2021 experience he had at Truist Park, home of the Atlanta Braves, who went on to win the World Series, despite being under .500 in July. 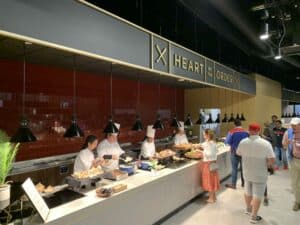 STAFF INFLECTION: Delaware North Sportservice used as many as seven staffing agencies at Truist Park, above, home of the MLB Atlanta Braves, during the team’s championship season last year. (Staff)

It was a season of uncertainty, from the play on the field to the numbers of fans in the stands, which opened to full capacity in May, to being able to fill all of the staffing needs during a long playoff run, he said.

“To go through the World Series in this environment was very tough to staff,” he said, showing off his hefty championship ring, which he wears “as a badge of honor.”

Turnover rates were bad going into COVID and only got worse, Lillios said.

“Operators like yourselves today can hire someone on Monday and they’re gone by Wednesday or Thursday,” he said, adding that turnover rates are worsening not only with hourly workers but with part-time and full-timer workers as well.

Generation Z, made up of those between 10 and 25 years old, has the worst retention rate, followed by Millennials,  Generation X and Baby Boomers, according to Lillios.

“The problem obviously is Gen Z represents a huge proportion of the workers that normally will take these jobs and seeing a turnover rate that is neartly 50% is kind of crazy,” he said.

A lack of advancement opportunity was cited as the leading reasons why former workers left their job, according to survey data cited by Lillios.

“They also mentioned having a flexible work schedule as well as providing different kinds of benefits like 401(k) and health insurance,” he said.

A survey of 18,000 hourly gig workers who were ssked if they would prefer to have an hourly wage increase or more paid time off resulted in 82% choosing the latter, according to Lillios.

As for wage trends, pay rates are going up to try and attract workers back, with the largest upticks in places like California and New York, “especially in urban areas,” Lillios said. “These increases are pretty substantial, so when you think about where these people are finding jobs, you’re competing with people locally, with other venues, with other employers that are now leveraging and trying to offer higher rates in order to draft workers.”

Thomas’ situation in Atlanta was presented a case study in achieving sufficient fill rates amid the ongoing staffing challenges, but he conceded that when Truist Park went to full capacity on May 7, 2021 — instead of sometime in July as originally anticipated — “we did not deliver on our service promise.”

“It was because we had commitments, staff said they were going to be there, but that day our percentage of folks who did not show was just off the charts,” Thomas said.

The workforce changes so evident in the COVID years had been bubbling up for about 10 prior to the pandemic, Waddell said. If it was only a matter of getting the contagion in the rear view, the worker shortage would have eased at least somewhat when venues returned to full capacities, he said.

But what he sees is a lack “of contentment with the traditional American five days a week, eight hours a day regimen for how they work.”

“Unless someone in the audience has a magic button to change sort of the American zeitgeist, I don’t think that’s really going to change,” Waddell said. “There’s a type of worker that can have a really successful experience working on a gig app that would not necessarily be someone you would want working full-time.”

Finding relative reliability under a new set of what seems like counter-intuitive criteria is not only possible, but sensible business practice in the current environment, the panelists said.

“There’s a whole group of people that is very large and growing that is opting for that type of work,” Waddell said.

Thomas said he has tried to offer some of his best temporary workers full-time opportunities only to find they prefer gig employment and like getting paid at the end of their shift.

Andy Gorchov, general manager of State Farm Stadium in Glendale, which is hosting the next Super Bowl, said in another session that there needs to be a shift in how large venues view and treat personnel, where employees can be loyal to teams and venues and likely are not in it expecting a hefty full-time salary and cushy hours.

“These positions are generally seen as high attrition and easy to replace, and that mindset has to change,” he said, noting the importance of customer service in establishing a positive experience for everyone at an event. “We need to approach improvements in the stadium experience to staff rather than only fans.”

Gorchov noted the importance of employee experience surveys at venues, where feedback can lead to material improvements and make staff feel valued.

“Our frontline staff know better than anybody where there is room for improvement and what we are doing well,” he said. “There’s nothing more valuable than feedback from the frontline employees interacting with fans and other employees on the ground.”