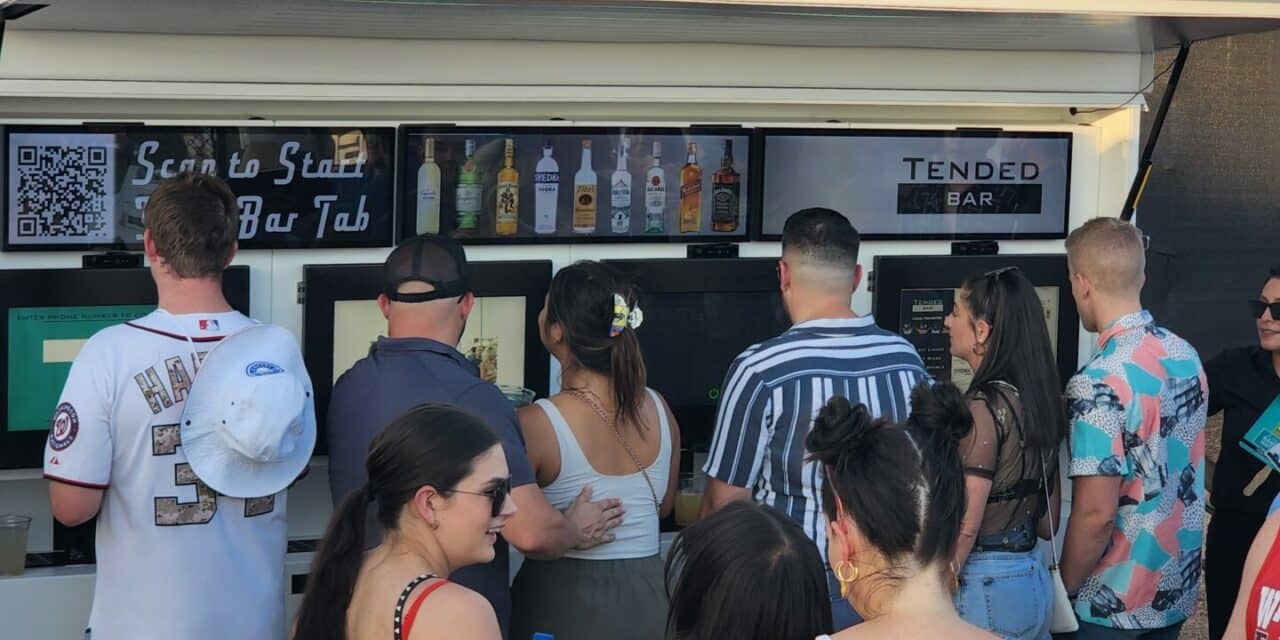 HEY BARTENDER: Fans line up to pour their own drinks at Empower Field, as the self-serve alcohol model continues to evolve.

Facial recognition technology continues its expansion into sports concessions. TendedBar is one example, as company officials continue to refine the process for self-serve cocktails at NFL stadiums and other venues.

TendedBar launched in 2019 at TIAA Bank Field, home of the Jacksonville Jaguars. The vendor now has its portable bar units in place at 10 big league facilities, according to Justin Honeysuckle, the firm’s co-founder.

Under its business model, TendedBar gets a 20% share of revenue from every cocktail sold, Honeysuckle said.

Initially, the system used RFID technology to activate TendedBar, but during the pandemic, the company transitioned to using facial recognition as part of the movement to contactless operations.

As the technology works now, users complete a one-time registration through their cell phone. They scan a QR code at the Tended Bar location, which guides them through a process for taking a selfie and photo of their ID, typically a driver’s license. The system verifies the validity of the ID and that the person is of legal age to purchase alcohol.

At that point, customers enter their credit card information for payment and in less than a minute, they get a text confirming their registration is completed. To order a drink at TendedBar, patrons hit a button on the machine, which takes a photo of their face and recognizes that individual in less than a second, Honeysuckle said.

Additional buttons provide options for different mixed drinks, whether it’s Jack Daniels and cola or vodka cranberry, for example, or the patron can create their own cocktail. Customers must grab a drink cup and fill it with ice before placing it underneath the pouring mechanism. The pour itself takes about three seconds to complete.

In addition, TendedBar features a tip button option and those gratuities typically are forwarded to the nonprofit groups working those physical spaces at sports venues, Honeysuckle said. At the end of the event, the machine automatically closes the customer’s bar tab and sends a receipt by text.

In late July, Aramark installed TendedBar at Empower Field, where the Denver Broncos play, in time for a Red Hot Chili Peppers concert. The machines are 10 feet long and can hold 10 liquors and 18 mixers at a time. There are three units at the stadium, including one in the West Club.

The facial recognition element, which Aramark calls digital age verification, is what drove the installation in Denver, said Alicia Woznicki, the concessionaire’s vice president of design and development.

TendedBar worked well for the concert and Aramark officials want to evaluate the rate of adoption during football season before determining whether it’s driving incremental sales over a standard bar.

“What we’re hoping for is to have more repeat users (among Broncos fans),” Woznicki said. “So far, it’s been used mostly for concerts. We’re asking people to complete an enrollment process, but that’s maybe for just one event. We want to grow enrollment and usage in-season.”

The quality, consistency and variety tied to TendedBar is another plus, she said.

“The other thing we’re playing around with is which locations on the concourses make sense to drive the most incremental value,” Woznicki said. “It’s about the same footprint as a standard portable, maybe a little bigger.”

At Empower Field, it’s still too early to see if the technology has increased speed of service.

In Las Vegas, Honeysuckle compiled his own unofficial data during the Academy of Country Music Awards in March at Allegiant Stadium. He did a time lapse test to compare TendedBar’s output with a standard bar nearby servicing field level seating at the Las Vegas Raiders’ venue.

In a span of 11.5 minutes, TendedBar served 63 drinks, tripling the output of bartenders at the portable stand.

Levy, Allegiant Stadium’s food provider, decided not to use TendedBar for the 2022 season but that could change next year, Honeysuckle said.

“The comment I got was we did really well at peak times, but when it was slow, people chose to go to the regular bar,” he said. “We still have good rapport with Levy and have gone into multiple Levy buildings.”