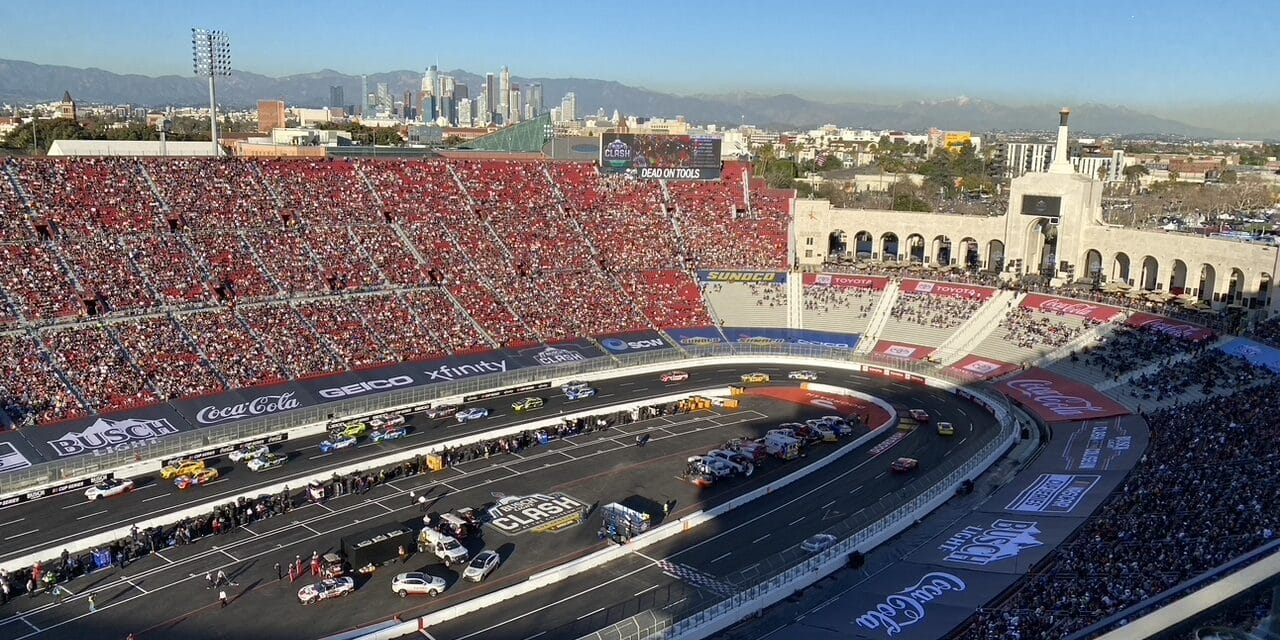 A week before the Super Bowl at nearby SoFi Stadium, fans thronged the venerable Los Angeles Memorial Coliseum for a NASCAR race and performances by Pitbull and Ice Cube. (James Zoltak/Staff)

“I haven’t seen an event with that much energy in a long time,” Furin said in an email exchange following the race. “It was cool to be a part of. “

Furin said the Busch Light Clash at the Coliseum, on a track that one report speculated would cost around $1 million to install and remove, could hardly have gone better.

“The Clash exceeded all of our expectations – everyone seemed to have a blast,” Furin said. “From the NASCAR organizers, to the racers to the awesome fans, the excitement started Friday night when test cars ran the track for the first time, continued to rise during Saturday’s heat laps and fan fest, then hit a crescendo on Sunday by the time the checkered flag dropped.”

Furin said he wasn’t at liberty to release specific attendance, gross and per caps on food and beverage and merchandise. VenuesNow reached out to a NASCAR spokesman for details.

Regardless, Furin said the capacity crowd arrived early and stayed late, taking in A-list celebrity sightings, performances by Pitbull and Ice Cube in addition to the roaring action on the track. There was also a military jet flyover to kick off the festivities. 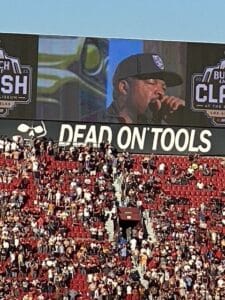 Fans lined up throughout the day to purchase refreshments on a hot and sunny day one week before the Super Bowl in nearby SoFi Stadium featuring former Coliseum tenant the Los Angeles Rams against the Cincinnati Bengals.

“We were busy all day long,” Furin said.

Breakdown of the track will be completed by February 20, Furin said, giving stadium crews time to res-sod the field in advance of the venue’s first LA Giltinis rugby match.

A NASCAR spokesman Matt Humphrey said  NASCAR doesn’t disclose attendance figures, but officials were pleased with the turnout, especially considering 70% of attendees were first-time ticket buyers to a NASCAR-owned event.

“Our broadcast partner, FOX, provided us with six hours of network coverage on Saturday, which provided a tremendous amount of exposure for our corporate partners and NASCAR Managing Director of Licensing & Consumer Products Paul Sparrow said sales on Sunday were three times those of the last full-capacity Clash race, held in Daytona in ’20.”

“Great new demos in attendance,” according to a statement from Sparrow. “Lots of celebrity star-power, exciting racing and real energy.”