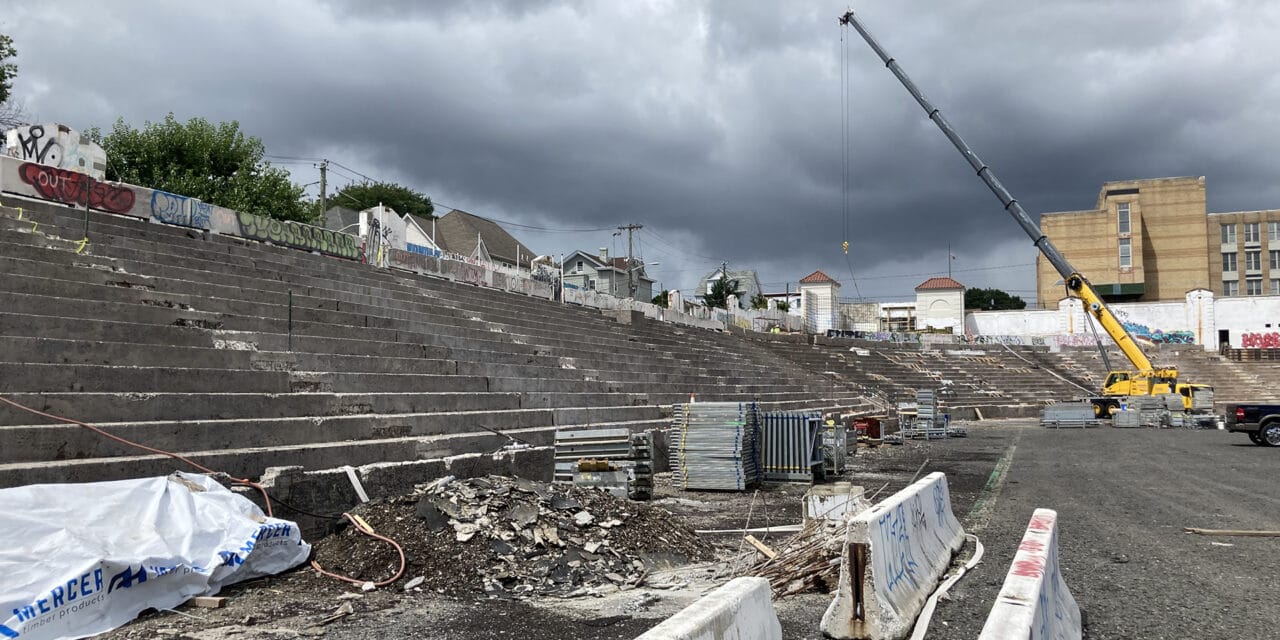 Demolition of the seating bowl, the first stage of construction at Hinchliffe Stadium, started three months ago. (Baye Adofo-Wilson)

Hinchliffe Stadium in Paterson was home to Negro League baseball

The developers behind the restoration of historic Hinchliffe Stadium have hired veteran facility manager Erik Stover to consult on the project, which is expected to be completed in late 2022.

Stover, president of Match IQ Americas, a marketer for global soccer teams in North America, will help form a plan to operate and program the refurbished 7,800-seat venue in Paterson, New Jersey.

Over the past 20 years, Stover ran two NFL stadiums and developed Red Bull Arena, a Major League Soccer facility. From 2012 through last April, he was chief operating officer for the New York Cosmos, a member of the National Independent Soccer Association.

Now, he’s involved in the restoration and preservation of Hinchliffe Stadium. The building opened in 1932 as part of President Franklin D. Roosevelt’s Works Progress Administration program.

In its early years, Negro League baseball teams from New York and Newark played games there.

The building has gone unused since 1997 and fell into disrepair, but that didn’t stop it from becoming a National Historic Landmark in 2013, in part because of the role it played in the Negro Leagues.

The stadium reconstruction anchors a mixed-use development tied to 75 units of affordable housing for seniors, a restaurant and exhibition space dedicated to the Negro Leagues and a 314-space parking deck.

The cost is $94 million for the entire project. Goldman Sachs provided a $60 million construction loan and $10 million in tax credits. US Bank is among the other funding sources, said Baye Adofo-Wilson, CEO of BAW Development, one piece of the development team.

RPM Development, its partner and one of New Jersey’s most experienced housing developers, lined up the financing package.

Paterson Public Schools has owned the venue since the 1960s, but under laws for issuing tax credits, the development team as a private entity will become the stadium’s new owner, Adofo-Wilson said.

Hinchliffe Stadium, which sits next to Paterson Great Falls National Historic Park, is one of the few Negro League structures still in existence.

The stadium played host to games with the New York Black Yankees, New York Cubans and Newark Eagles, a team featuring Larry Doby, a Paterson resident and the first Black person to play in the American League.

The comedy duo of Abbott and Costello performed at Hinchliffe Stadium. Lou Costello was born in Paterson in 1906, and a statue at a nearby city park honors him.

The stadium was also the home of local prep football rivalries, including the annual Thanksgiving Day game between Eastside and Kennedy, two Paterson high schools.

In a region where it can be difficult to get developments approved, several attempts to renovate the stadium fell through. Adofo-Wilson had the skills and clout to close a deal more than 20 years after the stadium closed its doors.

Adofo-Wilson graduated from high school in Paterson and joined the Army before earning an undergraduate degree from Rutgers and a law degree from Penn. He later served a fellowship at Harvard’s Graduate School of Design.

Most important, it was the three years he spent as deputy mayor of Newark and director of economic housing and development that served him well as an education in navigating politics in the New York/New Jersey corridor.

“I got into this (field) sort of by accident,” Adofo-Wilson said. “I was part of a group of people working to do progressive and political work in Newark. In that time, I started a nonprofit that’s done housing and (produced) a large music festival drawing 50,000 people.”

Four years ago, Adofo-Wilson went on his own as a developer. A friend, an assemblywoman in Paterson, asked him to help out on some city projects. They needed his expertise and the relationships he had with local politicians.

“I went to school with some of them, but had not been there in 30 years, and got reacclimated to the town,” he said. “They asked me to work on the stadium renovation. I had done similar financial structures for other projects. I assembled a team to tackle the restoration.”

For residents of Paterson, which is about 20 miles northwest of New York City, the stadium and surrounding development is a catalyst for reviving the city. At one time, Hinchliffe Stadium and the events held there provided the cultural core of the city, Adofo-Wilson said.

Working together with Stover, the goal is to position the stadium once again as a community hub.

The project falls in line with other parts of Paterson undergoing revitalization after decades of urban blight. The city of 160,000 provides an affordable option for new businesses and residents, according to a story this week on NorthJersey.com.

For developers, the key piece is the availability of land in New Jersey compared with New York, Adofo-Wilson said.

At the stadium, demolition of the seating bowl, the first stage of construction, started three months ago.

Most of the work revolves around restoring the bowl, which initially held about 10,000 seats. Spectator flow will be improved, along with building new bathrooms and a new running track and making the building comply with the Americans with Disabilities Act.

The pandemic has caused some delays, and project officials don’t know what’s going to happen this winter with COVID-19. Adofo-Wilson said they’re targeting a ribbon-cutting in early 2023.

High school football, soccer, lacrosse, rugby, and track and field are expected to be part of the event mix.

Stover said minor league pro football, whether it’s the resurrected XFL or the USFL, could be a good fit, too.

Those conversations haven’t happened yet, but Stover remains confident that the development team will find multiple tenants based on their overall experience, plus the location and layout.

For soccer alone, there’s a lot of talent in the area, which could prove beneficial to growing that sport at Hinchliffe Stadium, Stover said.

Three professional soccer players in European leagues came from Clifton, N.J., five miles north of Paterson. In addition, Derrick Etienne of Paterson, as a member of the Columbus Crew, scored a goal when the team won the 2020 MLS Cup last fall.

The field at Hinchliffe Stadium is big enough to meet U.S. regulations for college soccer and international friendlies with smaller clubs, Stover said.

“The renovation has to meet certain standards due to the landmark status, but we also want to strike a balance to make it as multipurpose as we can,” he said. “The school district is the primary tenant. There’s potential to add seats in the open end, but we need to walk before we run. We’ll open with 7,800 seats and see where we go from there.”