The Study That Made the Coyotes Expendable in Glendale 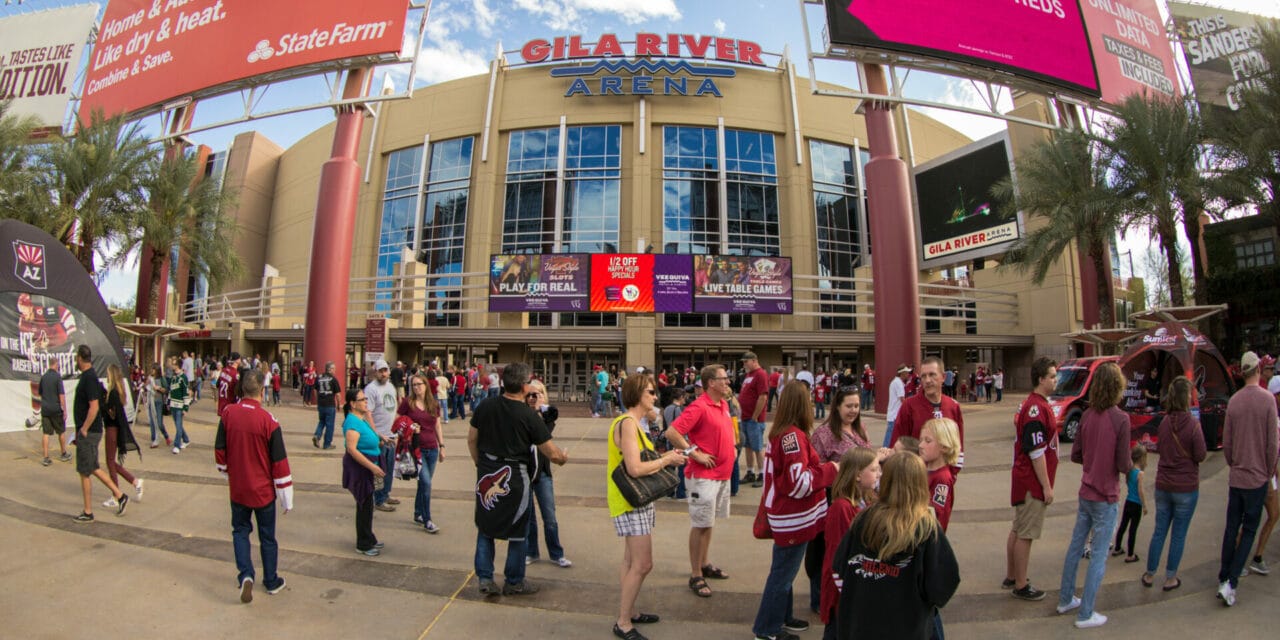 For Kevin Phelps, making the decision that Glendale, Arizona, should sever ties with the NHL’s Arizona Coyotes after their 2021-22 season was not difficult after he considered the financial ramifications.

Phelps, the city manager in Glendale, hired north Phoenix-based research firm Applied Economics to determine how many events it would take to replace the revenue from the Coyotes’ 43 home games. According to the results of the study, 20 events of 10,000 or more attendees would deliver the same economic effect for the surrounding 223-acre mixed-use development, Westgate Entertainment District.

The Coyotes have played at Gila River Arena in Glendale, a Phoenix suburb in the West Valley, since late 2003.

“It would take 20 concerts, professional bull riding events, whatever you want to call the event,” Phelps said. “Twenty would equal the entire 43-game season.”

Concertgoers, he said, spend more than hockey fans on food and drink —$58 per person compared with $27 in the arena or Westgate Entertainment District.

Sarah Murley, a principal at Applied Economics, attributed this in an interview with The Seattle Times to concerts being a “special event” for which attendees linger longer and are more likely to stay overnight at nearby hotels.

“We had Elton John right before the pandemic,” Phelps told VenuesNow. “People took a half-day off work. They went to the district for dinner, walked into the arena and stayed afterward and had drinks in district restaurants.”

“Concerts tend to be experiential,” he said. “With hockey, we find people get off work for a midweek game, they walk into the arena before the puck drops, have food in the arena and generally go back home. It doesn’t have a tremendous amount of impact.”

In an Aug. 19 statement, Coyotes CEO Xavier A. Gutierrez said, “We are disappointed by today’s unilateral decision by the city of Glendale to break off negotiations on a multi-year lease extension agreement. We are hopeful that they will reconsider a move that would primarily damage the small businesses and hard-working citizens of Glendale. We remain open to restarting good-faith negotiations with the city.”

Beyond Arizona, the move seemed a bit surprising, but nothing is too shocking for the Coyotes. They’ve struggled to draw fans since the arena opened 18 years ago. The NHL acquired the team and ran it for about four years  after the Coyotes filed for bankruptcy in 2009.

Renaissance Sports & Entertainment, a group of Canadian investors, bought the Coyotes in 2013. Alex Meruelo became the majority owner in 2019.

The team’s financial struggles have continued over the past eight years. Coyotes ownership has made no secret of its desire to leave Glendale, situated about 20 miles northwest of downtown Phoenix.

The question that remains is where will the Coyotes play after the deal with Glendale winds down?

The Coyotes reportedly responded to a city of Tempe request for proposals to build a new arena. The RFP seeks a professional sports franchise and entertainment district for two parcels of city-owned land totaling 46 acres.

In the meantime, the Arizona State Fair’s 15,000-capacity Arizona Veterans Memorial Coliseum in Phoenix comes closest to providing a temporary fix. Capacity is 13,730 for hockey, which adds up to about 3,500 fewer seats than Gila River Arena.

The coliseum sits on the Arizona State Fairgrounds and is programmed with concerts during the state fair’s annual three-week run in October.

In Tempe, Arizona State University is developing a 5,000-seat arena that would most likely be too small for NHL standards. It would cut capacity for the Coyotes by more than 70%.

It’s set to open in late 2022 or early 2023. The $115 million venue will house the Sun Devils hockey team, gymnastics and wrestling.  (The arena will be managed and operated by Oak View Group, which also owns VenuesNow.)

Footprint Center is not an option. The arena’s recent $230 million renovations reportedly eliminated the possibility that hockey can be played there.

It wasn’t built for hockey anyway. When the Winnipeg Jets moved to Phoenix and became the Coyotes in 1996, they shared the arena with the Suns until they moved to Glendale. For hockey, there were a few thousand seats with obstructed views, resulting in a poor fan experience.

One-hundred miles north of Phoenix, the Findlay Toyota Center in Prescott, Arizona seats 5,100 for hockey, according to its website. It’s another steep drop in capacity, plus traveling to Prescott for weekday games would be problematic for fans.

In making the city of Glendale’s decision, Phelps said he had the support of Westgate Entertainment District’s owner, YAM Properties, whose founder and CEO is Bob Parsons, founder and former executive chairman of web hosting giant GoDaddy.

“They said they see Glendale as a great partner,” Phelps said. “They 100% support our decision with regard to the arena. If anybody has something to say about this, it would be the landlord. They want their merchants to do well. But it’s not the case at all.”

“We do incredibly well with Gila River Arena,” he said. “The fans really have a good overall experience. It’s easy on and off the freeway. There’s ample parking. There’s a great variety of entertainment and great hotels.”

Westgate will add another attraction when the Tiger Woods co-owned golf and dining experience PopStroke opens there, scheduled for the coming year.

Next door, the arena stands to lose its primary tenant when the 2021-22 NHL season winds down and the Coyotes’ time is up there. The team pays a base rent for the year of $500,000, according to Phelps, but it also keeps the majority of the revenue from the arena’s naming rights deal with Gila River Casinos. “They keep 100% of all food and beverage on game day, all parking on game day and all merchandise on game day,” Phelps said.

“No matter which way you slice and dice this, (having the Coyotes leave) is financially better for the city of Glendale,” he said.