Moving the Cooking Forward and Making the Service Faster 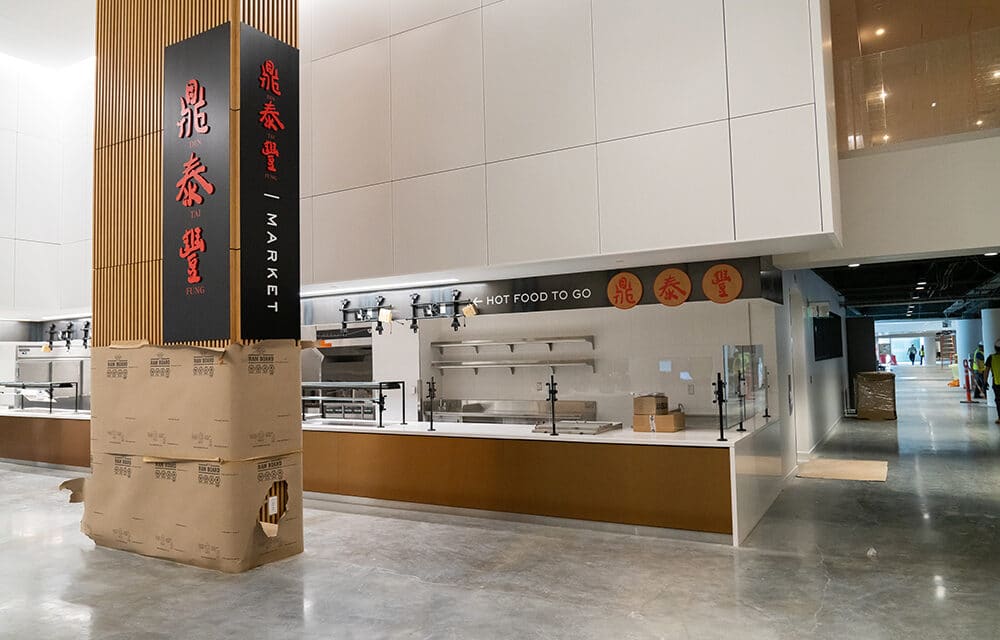 In Seattle, a city known for innovation and technology, it’s a watershed moment for the industry as food vendors strive to increase speed of service, eliminate concession lines, operate more efficiently and drive higher revenue.

The system is one step removed from self-checkout because of state liquor laws and the way Sportservice’s liquor license is structured. Concessions workers are present to verify that fans buying alcohol are of legal age.

“Belly-ups are only for the portables,” Gaber said. “We moved all the cooking forward, so you can see the food made in front of you. It’s hot and ready to go. We took that same technology from the Krogers of the world and partnered with Toshiba for assisted checkout.”

Four locations are tied to Amazon’s Just Walk Out technology. Fans enter the marketplace, scan their credit card, grab their items and walk out without having to stop for payment, eliminating concession lines.

Those locations will also have workers checking IDs to verify customers are old enough to buy alcohol.

Amazon’s system detects which products customers take from the shelves and keeps track of them in a virtual cart. Customers’ cards are charged after they walk out of the marketplace.

Sportservice was among the first food providers to test the Amazon system. The system was activated at two marketplace locations at TD Garden, the Boston arena owned and operated by Delaware North, toward the end of the 2021 NHL playoffs.

“With Seattle being a tech hub, everything is new,” 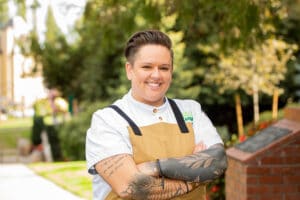 CHEF’S KITCHEN: Molly DeMers serves as the arena’s executive chef after coming over from the Seattle Aquarium. (Courtesy venue)

Gaber said. “We’ve got the best of the best in moving people through concessions as quickly as possible.”

On its own, Sportservice has tested marketplace design over the past decade at two MLB stadiums, Great American Ball Park in Cincinnati and Petco Park in San Diego. In 2020, Sportservice opened five grab-and-gos at Lambeau Field, home of the NFL’s Green Bay Packers.

“We went hot and heavy with it for a while now, similar to our airport business,” Gaber said.

“The more you can move people through the lines, the bigger the (transaction) is with higher per caps,” he said. “We’re still using the same amount of labor because we still need people in different locations stocking shelves.”

Toshiba has been in the grocery business for about 20 years, but the technology firm is a new player in the concessions point-of-sale space. Sportservice picked Toshiba after having issues with other point-of-sale vendors for kiosks and mobile technology, Gaber said.

Seattle’s also a craft beer hub, well ahead of the curve with the microbrewery craze that has taken the country by storm.

Climate Pledge Arena, by virtue of the marketplace concessions model, doesn’t have a central draft system, but four locations in the building will have craft beer walls featuring local brands and flavors.

The beer walls and taps are designed with flexibility to serve both general concessions and premium customers. One side of the wall faces the public on the concourses. The other side faces a club lounge for premium patrons.

There’s a cooler hidden in the middle of the structure to keep the suds frosty, Gaber said.

“We’ll have 16 different beers between those four bars with seasonal options and another six to seven brands served in cans,” Dominguez said.

Most beer selections, whether from MolsonCoors or  Constellation Brands, two arena partners, or the craft beer coalition in rotation, will be served in cans, Dominguez said.

“I joined (Sportservice) in February and we started to put a little pressure on the guys we know here (among local brewers) that ‘it’s going to be mostly package beer, so find a way to put it in a can and get it to the market,’” he said. “A lot of them were able to adjust due to the pandemic.”

At all the marketplaces, similar to a convenience store, there will be eight to nine coolers set up. Each one can hold 800 cans, distributed among beer, soda, water or pre-mixed cocktails.

Premium dining in the suites has essentially returned to the pre-pandemic style of service, which means those patrons have the option of serving themselves as part of Sportservice’s catering operation.

“So far, there have been no issues,” Gaber said. “We may need to pivot, depending on if the COVID numbers go up. We’re currently allowed to self-serve, but we’re taking precautions to make sure we’re clean and safe.”

Ballard Pizza and Metropolitan Grill are among the local food brands that Sportservice brought to the arena.

The two sideline clubs will integrate a pop-up chef series. Local chefs will rotate every 45 days, offering the best dishes representing Seattle neighborhoods. Dominguez has established relationships with some restaurateurs, which helped in making those decisions.

Molly DeMers serves as the arena’s executive chef after spending three years at the Seattle Aquarium. DeMers has worked at convention centers in Denver and San Diego over the course of her 15-year career.

Sportservice plans to employ 450 game day workers for most events, all of whom must all be vaccinated per requirements implemented by Oak View Group, the operator of Climate Pledge Arena. (OVG is also the owner of VenuesNow.)

As it has for all sports concessionaires, finding part-time employees has been a challenge for Sportservice.

“We’ve had some job fairs with a good amount of people coming through and a few nonprofits as well. We’ve been pleasantly surprised,” Gaber said.

At an arena poised to set the benchmark for sustainability with a carbon-neutral footprint, Sportservice officials said 95% percent of cooking ingredients will be locally sourced within a 300-mile radius.

Pepsi, which holds the venue’s pouring rights for nonalcoholic beverages, is working closely with Sportservice to eliminate all single-use plastic containers by 2024, joining other venues doing the same thing.

The food provider will use Ball aluminum cups for draft beer, along with recyclable paper products and bamboo plates and utensils. There will be no straws. Even the workers’ gloves are recyclable, Dominguez said.

“Delaware North has gone down this road for a while,” Gaber said. “We already had a lot of this stuff in our ecosystem. It’s really just pulling it all together from everywhere else. It’s not just a one-off here.”