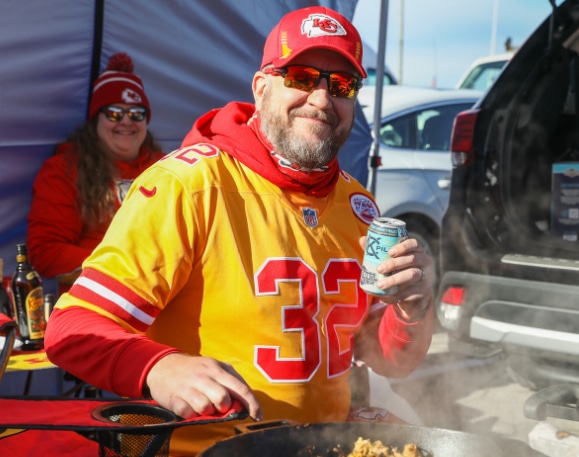 For NFL teams, balance required for tailgating and mixed-use

Over the past 15 years, many sports developments have extended to mixed-use components with retail and entertainment districts to create a year-round destination apart from seasonal play in the big leagues.

That’s true for NFL stadiums, which in part is driving the trend to build new facilities to replace buildings less than 30 years old. (See story in the July issue of VenuesNow magazine).

There are a few exceptions, notably the Buffalo Bills and Kansas City Chiefs.

The Bills are in the early stages of planning a $1.4 billion stadium set to open for the 2026 season. As it stands now, there’s no mixed-use project tied to the venue, to be built next to Highmark Stadium in Orchard Park, New York.

For the Bills, the focus remains on football first for a team that enjoys a strong tailgating culture. In that respect, the parking lots play key roles for both venues. The site of Highmark Stadium, after it’s torn down, will ultimately become parking for the new building.

Buffalo has such a strong tailgating culture at Highmark Stadium that the Bills “wouldn’t want to destroy it,” said Lanson Nichols, HNTB’s vice president of sports architecture.

There is enough land in Orchard Park to develop mixed use after the new stadium opens, according to Jonathan Mallie, a senior principal with Populous and its director of the New York office. He’s working on the Bills’ project.

“In terms of that tailgating experience, it’s about how to plan for the proper amount of parking, but also think about the potential for the future,” Mallie said. “Sports-anchored development is everywhere. It’s a delicate balance, giving the fans what they want and need today, (but also) understanding that to truly activate a stadium and a community you want to create some density around it.”

In Kansas City, the Chiefs are searching for potential sites in both Missouri and across the state line in Kansas to build a new venue. It would replace Arrowhead Stadium, which opened in 1972 and sits next to Kauffman Stadium, where Major League Baseball’s Kansas City Royals play.

All told, 19,000 parking spaces at the Truman Sports Complex surround both venues. On NFL game days, Arrowhead Stadium turns into one of the biggest tailgating scenes in one of the country’s BBQ hotbeds.

For the Chiefs, developing a new stadium elsewhere would most likely include plenty of tailgating space with an eye on possibly forming an entertainment district to keep the overall property busy year-round.

“From a vehicular standpoint, Arrowhead is a place that’s easy to get to and a great tailgate experience, but what you lose in that is you don’t have that district,” said Nate Appelman, HOK’s vice president and director of sports, recreation and entertainment. “It’s a different dynamic and potentially something they’re looking for.”

The makeup of an entertainment district is also key. For teams that thrive on tailgating, there’s a need to balance that activity with a district’s restaurants, as well as stadium concessions.

“An NFL stadium requires so much transportation getting people there; you’re bringing in high volume and want it near a district where people can grab dinner or go to a bar afterward and extend the day there,” Nichols said.

At the same time, the site still has to make sense for an entertainment district, not just because there’s a stadium planned for that location, said architect Dan Meis. Hotel rooms come into play and the general geography of the community for teams thinking about mixed use, he said.

The Green Bay Packers have proven that tailgating and mixed-use can blend together at an NFL stadium without cannibalizing each other.

Five years after Titletown, the team’s entertainment district, opened across the street from Lambeau Field, that part of the overall development is flourishing, said Matt Rossetti, the Detroit architect working with the Packers on multiple projects at both venues.

Green Bay is a different animal, though, connected to a statewide fan base. Plus, Lambeau and Titletown sit in the midst of a residential neighborhood in the NFL’s smallest market, and in that sense, it’s unique, sports designers said.

The inspiration for Titletown started 20 years ago with the $300 million expansion of Lambeau Field. The centerpiece is the Atrium, a special event space with a restaurant, retail and the Packers Hall of Fame & Museum connected to the stadium.