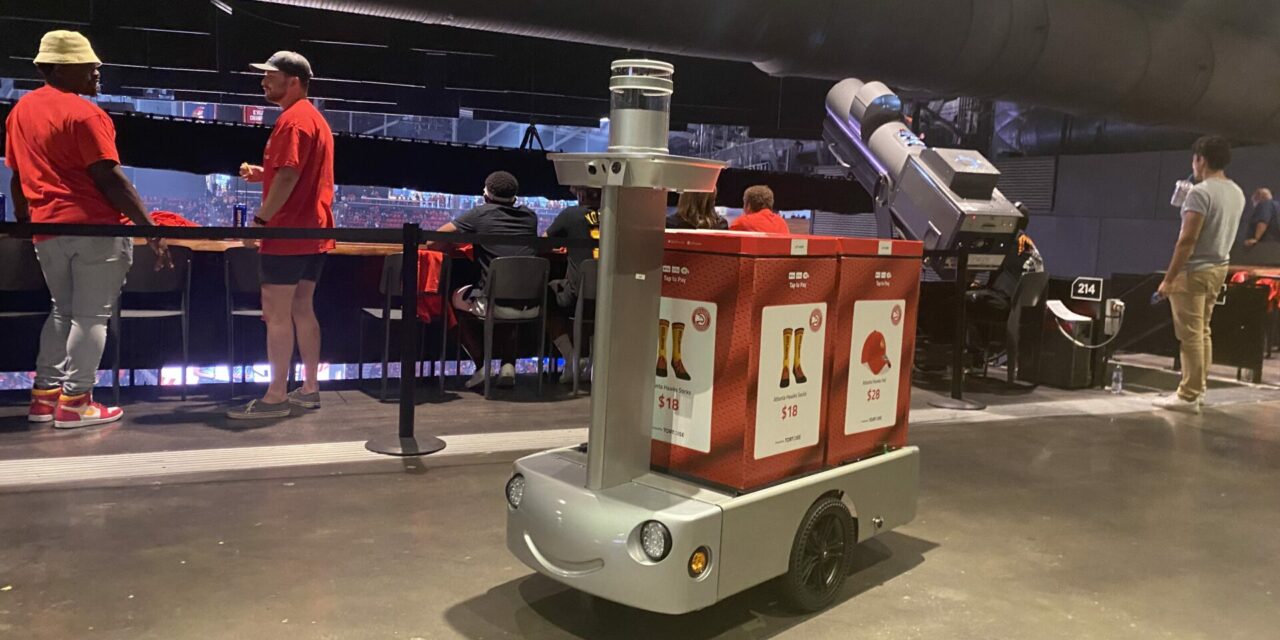 Robotic delivery is trending across sports venues with greater frequency as concessionaires tinker with innovation to improve fan experience and use the technology as a tool to generate incremental revenue.

Tortoise, a 5-year-old Bay Area firm, is the newest player in that space.

The tech vendor has deals with Aramark and Legends at Capital One Arena and Golden 1 Center, respectively, to test its remote-controlled “store on wheels.” At State Farm Arena, the tech vendor has an agreement with the Atlanta Hawks as part of the team’s in-house merchandise operation.

Under a revenue-share model, the tech vendor receives 10% of total sales, teams and food providers said.

Elsewhere, Levy tested a similar system, Bear Robotics, in an all-inclusive club at Toyota Center over the past NBA season. In 2018, Levy was at the forefront of the technology, testing a robot to flip burgers at Dodger Stadium.

“The feedback I’ve received on robotics in general is it’s still more of a novelty and doesn’t solve as many problems,” Plutino said. “We haven’t advanced too much since it all started four years ago. It might make sense because everyone is focused on how to reduce staff and improve efficiency.”

On its own, Tortoise got its start in West Coast supermarkets, setting up robots outside those stores to deliver groceries for consumers picking up online orders.

A funny thing happened in the process, said Tortoise co-founder and president Dimitry Shevelenko. While the robots waited for their next order to fulfill, shoppers walking into the grocery would stop and start talking to the machines. They all thought they could buy something from the robots by speaking to the devices, said Shevelenko, a former executive with Uber, Facebook and LinkedIn.

“We were surprised at this because they weren’t designed for that (communication) and it kept happening again and again,” he said. “That was our proverbial light bulb moment.”

Apart from delivering groceries, Tortoise officials rigged the robots with a Near Field Communication system tied to tap-to-pay transactions to meet the demand for impulse buys from shoppers intrigued with the technology. The systems are equipped with tiny cameras inside the robot to document orders.

Tortoise accepts ApplePay, GooglePay and other credit cards embedded with tap-to-pay technology. Customers tap their card or cell phone on the robot’s container lid, which through a Bluetooth-enabled mechanism, unlocks the cart to remove the item purchased. Pre-recorded audio messages help guide the customer through the transaction.

Unlike other robots, Tortoise is not autonomous. There are two ways to operate the robots, including a “joystick” device similar to an Xbox device controlled on site by the concessionaire.

In addition, Tortoise has a call center on standby in Mexico City with staff that fills the role of a remote store clerk and driver to assist concessionaires and venues to monitor robot activity and mitigate potential theft. The robot charges the consumer for a second item if that happens, which is a rare occurrence, Shevelenko said.

“The magical thing that we inadvertently stumbled upon is when you’re selling one skew per container at a time, there’s no friction for the consumer,” he said. “There’s no mobile app, website or QR code to go to. Compared with Amazon Just Walk Out, the real benefit here is there’s no infrastructure investment required. Anybody can use it.”

To date, the average transaction time is 11 seconds from the initial tests at sports venues, Shevelenko said.

“We look at the world through the lens of wherever there are long lines, a lot of food tranffice and a captive audience, we’re in a good position to add value,” he said. 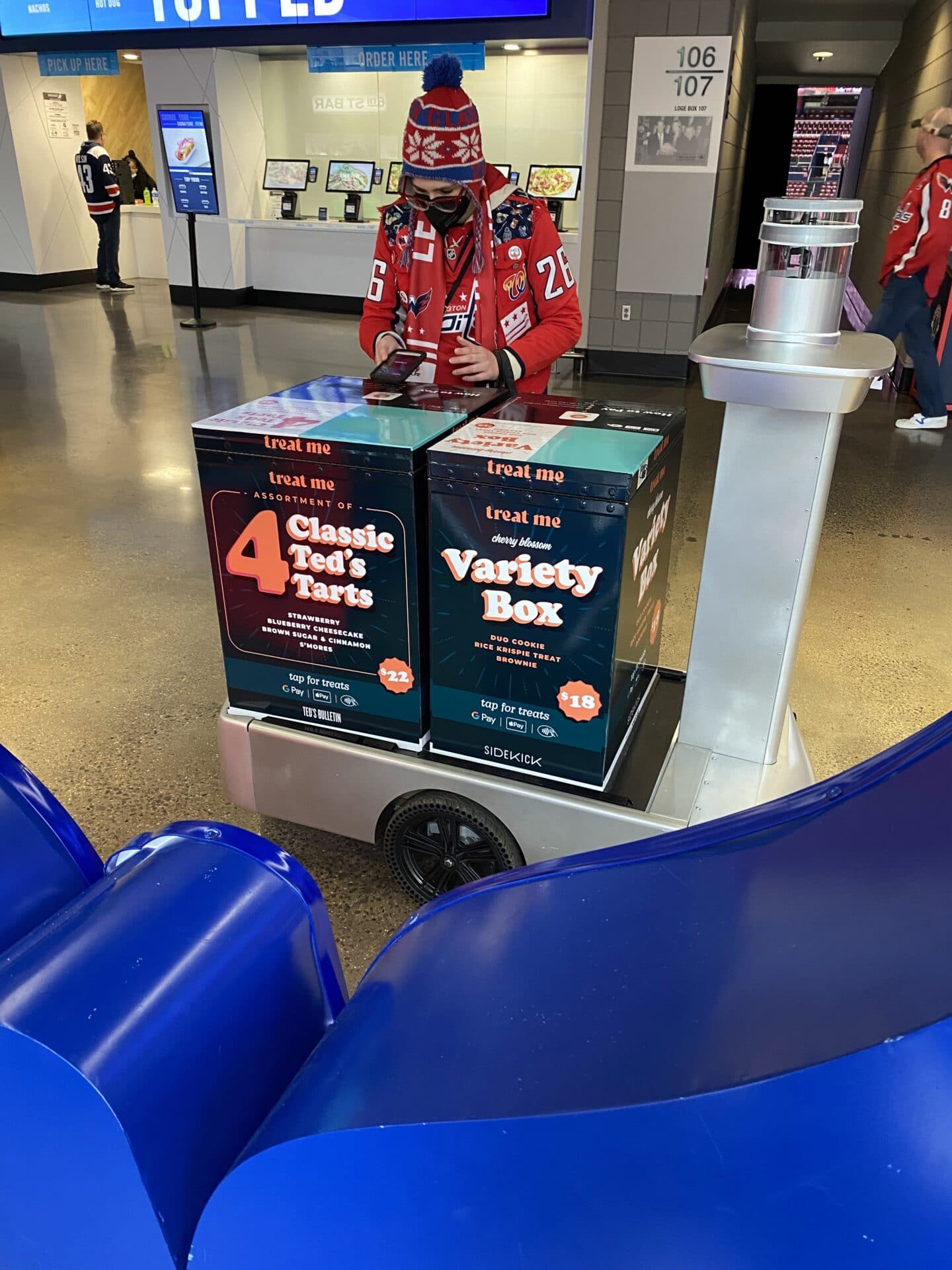 Aramark found out about Tortoise through one of its other suppliers, said Alicia Woznicki, the firm’s vice president of design and development. It was a quick turnaround of eight days between the first meeting Tortoise had with Aramark and the first time the robot was used at an event, Shevelenko said.

The food provider first tested Tortoise internally at Capital One Arena, home of the NHL Washington Capitals, before going live in early May for three Stanley Cup playoff games. The vendor stocked the concourse-roving robot, branded as “Treat Me,” with cookies, rice krispie bars, cheesecake and ‘smores. The treats sold for $18 to $22.

Officials prefer the ability to control the robot on their own because they didn’t want to do something fully autonomous and worry about how it might interact with crowds.  It’s more about the flexibility to move the robot around during game action when the concourses aren’t as crowded and keeping it stationary during intermission, Woznicki said.

“It worked great,” she said. “One of the biggest things that we wanted to pilot during the launch was how the robot would navigate among large crowds of people. It gets a lot of attention. It’s a way to offer fans more variety without putting those specialty items into a larger stand where they might not generate revenue.”

At State Farm Arena, the Hawks tested Tortoise to sell Hawks socks ($18) and hats ($28) for two home playoff games. The Hawks tried something different after seeing other teams test it for food and drink. The robot roamed outside the arena at gate entrances and on the main concourse, said Tylyn Castellanos, the Hawks’ director of experience strategy.

“We’re focused on innovation,” Castellanos said. “We’re also interested in testing out some different things for concerts as well, which should give us a good idea of what we do next. It’s engaging for our fans, not just in the arena, but on social media. It’s a conversation piece.”

In California’s capital city, Tortoise is the second generation of robotics at Golden 1 Center. When Golden 1 Center opened in October 2016, the Knightscape 3000 robot, installed with multiple cameras on its outer skin, was used as a surveillance tool in the building.

About six years later, Knightscape 3000 has been retired, but Kings fans remain intrigued with the technology and the robot provides Legends with additional points of sale. The nice thing about Tortoise is the customization aspect to program whatever the user wants it to do, and the joystick adds to the coolness factor, Rush said.

“We thrive on cutting-edge technology and new experiences and this is an interesting concept,” he said. “We’ve had positive feedback so far. The units themselves are coolers, not like chillers, so whatever you put in there must hold its temperature on its own.”

Moving forward, Aramark has plans to expand Tortoise at some of its other big league accounts such as Major League Baseball and NFL stadiums, although as of mid-June, no agreements were signed, company officials said.

Tortoise is also in talks with Legends, which runs the food at most Live Nation amphitheaters, to place robots at Shoreline in the Bay Arena, as well as OVG Hospitality in convention centers and college sports facilities.

“Venues are a sweet spot for us,” Shevelenko said. “They all have the same set of challenges: they can’t hire enough staff, they want incremental sales and to delight their fans.”