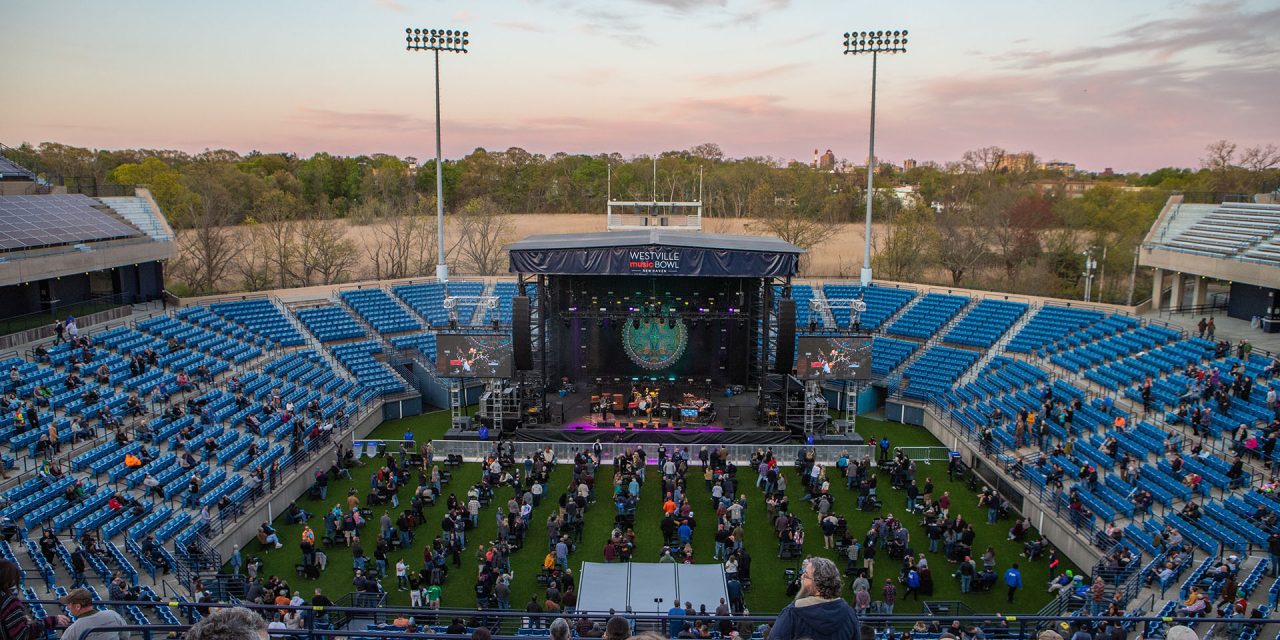 New Haven venue on track for 40 shows this year

Six months after he parted ways with the world’s biggest event promoter because of the pandemic, Niedbalski formed his own promotions company, Lovely Day Presents. He’s got multiple projects in development.

The first venture, Westville Music Bowl, kicked off April 30-May 2 in New Haven, Connecticut, with three Gov’t Mule shows in a socially distanced setting. Local concert promoter Keith Mahler controls the venue and brought Niedbalski on as a partner to help book acts there.

Westville Music Bowl is a retrofit of the old Connecticut Tennis Center, a $20 million stadium that opened in 1991. It sits on the Ivy League school’s athletic complex across the street from the historic Yale Bowl, where the Grateful Dead performed 50 years ago this July.

Now, groups such as The Disco Biscuits, Twiddle, Umphrey’s McGee, Tedeschi Trucks and Joe Russo’s Almost Dead, a Grateful Dead cover band, are booked at the same venue where Venus Williams, Boris Becker and Andre Agassi have won tennis tournaments over the past 30 years.

It’s not the first time a tennis stadium at the sport’s professional level has been repurposed as a concert venue.

In New York, Forest Hills Stadium, which opened in 1923, played host to the U.S. Open for more than 50 years before the event moved to the U.S. Tennis Association Billie Jean King National Tennis Center in 1978. Forest Hills was eventually converted to a live music facility in 2013.

The comparison ends there, considering the building in New Haven is much newer, Mahler said.

The transition from tennis stadium to a 10,000-capacity concert facility began before the pandemic.

As a sports facility, it struggled in recent years to retain sponsors to help cover operating costs for running events at the highest level of professional tennis, and sat dormant for most of the year, according to local news reports.

Tournaments that were long part of the top men’s and women’s professional circuits, the Association of Tennis Professionals and the Women’s Tennis Association, left the facility. The final professional tournament, part of the lower-level Oracle Challenger Series, was played in September 2019 at the building.

Bookings at Westville Music Bowl later this year could potentially expand to 10,000 for a full stadium or 5,000 with seating restricted to the lower bowl. (Courtesy venue)

The stadium originally held 13,000 for tennis. At the time, it stood among the sport’s five biggest outdoor facilities in the U.S.

Later that fall, the stadium changed ownership after a relatively quick negotiation between Mahler and the stadium’s previous stakeholders.

Mahler runs two clubs in the area, Space Ballroom and College Street Music Hall. Now, he’s added the stadium after the university, the city and the Tennis Foundation of Connecticut, which ran the tennis events, reached out to him to gauge his interest in operating the facility.

“It took us a little less than 30 days to put the deal together,” Mahler said. “We were scheduled to put all the wheels in motion for 2020 … and I don’t have to tell you what happened.”

The project remained intact during the shutdown of live entertainment, and renovations were completed this year.

A subsidiary of the New Haven Center for the Performing Arts, a nonprofit group, now owns Westville Music Bowl, in addition to College Street Music Hall.

Mahler wears hats for both concert promotions and venue operations, and one of his companies invested an undisclosed amount of money to improve the stadium, which is on track to host about 40 shows in 2021.

Beyond the typical steps required to turn the stadium into a top-flight concert venue with state-of-the-art lighting, audio and LED video systems, the infrastructure needed a thorough recaulking of all surfaces.

“Everything was touched,” Mahler said.

One thing he didn’t touch for the most part was the seating bowl. The sightlines work just as well for concerts as they did for tennis. The intimacy of the venue turned into a great addition for concerts, Mahler said.

“A tennis stadium is designed so that every single seat can see that little (yellow) ball in the middle of the court,” he said. “Every viewpoint is perfect, so when you’re looking beyond the center of the court to (what is now) a stage, it doesn’t get better than that. The stage is a perfect fit for the building.”

Judging from the first weekend of music, April 30-May 2, the sound was perfect as well, Mahler said.

As a tennis facility, the stadium played host to several concerts from 1992 to 1994, including Crosby, Stills & Nash, Bonnie Raitt, Steve Miller and Bruce Hornsby, according to setlist.fm, a concert database site.

For those shows, Mahler recalls the stage was set up along the baseline on the west side in a building with a back-of-house that wasn’t designed to meet the needs of touring productions.

The key to transforming it into a viable concert venue was cutting open part of the east side concourse to fit a large loading dock behind the stage on that end, he said.

“I knew instinctively what we needed to do to the building,” he said. “When we were approached years ago about producing some shows with the tennis foundation, we passed because we knew it was going to be abhorrently expensive and didn’t want to mess with the tennis surface. It did not make sense economically.”

The commitment to live music changed that dynamic.

Niedbalski toured the venue before he signed on and was impressed with the layout. He believes Westville Music Bowl will become a must-play for artists touring the Northeast after word spreads about the venue.

As of this week, there were 21 shows on the books through July 7, most of which are multiple-night runs.

Those dates are socially distanced setups with total capacity running between 2,000 and 3,000. Most are sold out.

On May 19, the state of Connecticut reopens at 100% capacity for all types of venues. At Westville Music Bowl, the 12 to 15 additional bookings through September could potentially expand to 10,000 for a full stadium or 5,000 with seating restricted to the lower bowl.

Ultimately, it’s up to the act and its comfort level for determining the right capacity, Niedbalski said.

“There are still some artists and fan bases easing their way back to the concert experience,” he said. “Artists that have shows on sale right now are going to keep the same level of (6 feet of) social distance they went on sale with. We’re willing to work with them if they want to open up additional tickets.”

For nine years at Live Nation, Niedbalski ran Peach Fest, a festival tied to the Allman Brothers Band, plus Mountain Jam and Camp Bisco, along with booking The Met Philadelphia, a 3,500-capacity theater in Philadelphia.

Mountain Jam is where he first met Mahler, which led to their partnership. Overall, Niedbalski is using the relationships he formed at the Live Nation events and venues he was involved with to develop a strong lineup for Westville Music Bowl’s inaugural season.

“The main focus of my business is getting back to the Bill Graham model of promotion, where great deals are when an artist is paid well and taken care of on and off the stage and everybody makes money,” he said. “The first step is opening this beautiful venue in New Haven.”