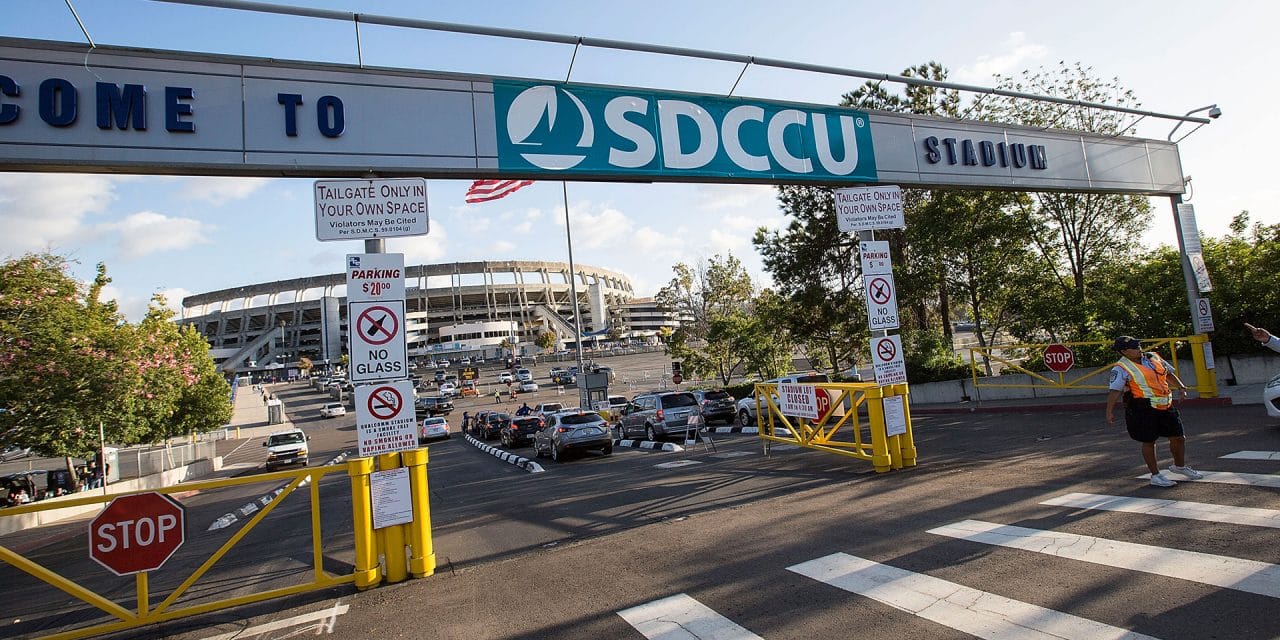 San Diego County Credit Union is in negotiations with San Diego State University to acquire naming rights for the school’s new 35,000-seat football stadium, according to sources familiar with the situation.

No deal has been signed and talks have not yet entered their final stages, but sources pointed to an agreement getting completed this summer. The $310 million facility is set to open Sept. 3, 2022, for San Diego State’s season opener against Arizona.

Derek Grice, San Diego State’s executive associate director for the Mission Valley development, which encompasses the stadium, did not return emails for comment.

There’s familiarity between the two parties: The same credit union held naming rights for SDCCU Stadium, the former home of the Aztecs. Demolition of the stadium was completed in March.

Legends Global Sales, which partnered with JMI Sports to market the new stadium’s naming rights and premium seats and serves as owner’s representative, is brokering the deal.

One negotiating point extends to defining the official name. San Diego State has already named the playing surface for donor Dianne L. Bashor after she provided a $15 million gift to help pay for construction. The gift was announced in December 2019 for what has been officially referred to as Bashor Field at Aztec Stadium.

It’s unknown how that agreement would affect the value of naming rights to the stadium itself, but it’s not expected to hold up the deal, sources said.

The donor’s name on the field “crowds the space a bit” for the primary naming-rights holder, but there is still great value for the credit union, said consultant Rob Yowell, president and founder of Gemini Sports Group.

In 2017, Yowell was consulting for tech firm Sportsyard when it was a finalist for naming rights to Qualcomm Stadium before the deal was awarded to San Diego County Credit Union.

The credit union, established in 1938, has more than $9.5 billion in assets with 44 locations in Greater San Diego. It’s been the title sponsor of the San Diego County Credit Union Holiday Bowl game since 2017. The credit union is also a sponsor of Major League Baseball’s San Diego Padres.

“Plus, with the field named for a donor, they’re probably not prickly about that situation,” he said. “They’ve already done it once and aren’t trying to become a ‘player’ in that space. If it was a cryptocurrency brand, for example, it could be problematic not having their name everywhere.”

Sports marketers say the San Diego region is not especially strong when it comes to Fortune 500 brands that have the deep pockets and brand equity to buy naming rights.

Plus, San Diego State plays in the Mountain West Conference, a non-Power Five league that doesn’t get as much television exposure as the Pac-12 Conference, the West Coast’s biggest football league.

The building, designed by Gensler and built by Clark Construction, is being developed to meet MLS standards, Grice told VenuesNow in May 2019, at the time the school hired Legends and JMI.

Sources said the potential addition of an MLS team at the new stadium is another deal point that’s taking some time to iron out, although the exact issue is unknown.

There is speculation that San Diego Loyal SC, a member of the USL Championship league, the second-highest tier of pro soccer in the U.S., could eventually move up to MLS. It was formed in June 2019 and played the 2020 season as an expansion team.

Project officials are also positioning the stadium as a prime venue for outdoor concerts.

As it stands now, apart from North Island Credit Union Amphitheatre, a 20,500-seat facility in Chula Vista, and Petco Park, home of the Padres, there are few outdoor facilities in the region to match the capacity and amenities of the new football stadium.