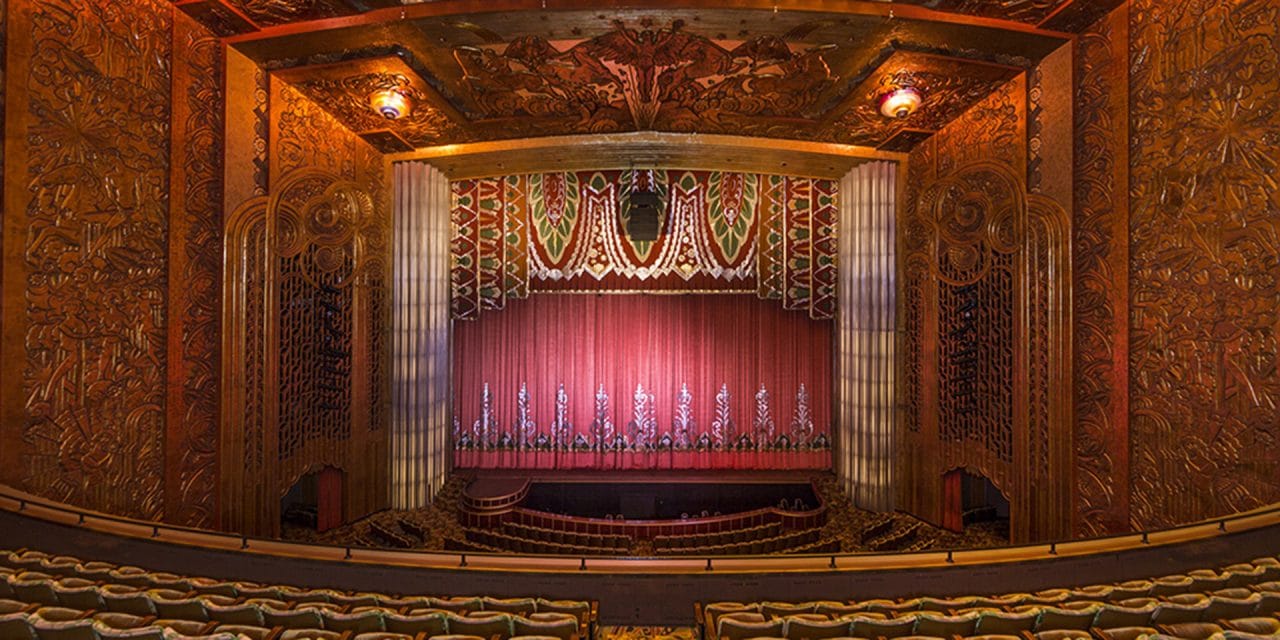 “I’m a history major,” says theater GM Leslee Stewart, “so when I came and interviewed and saw the beauty of that theater, I personally and professionally do not feel that I can take license with what (Timothy) Pflueger did as the architect.” (Courtesy Paramount Theatre of the Arts Inc.)

Business was brisk at the historic Paramount Theatre in Oakland, California, before the pandemic struck the live entertainment industry like an asteroid.

Built as part of Paramount Publix Corp.’s spree of movie house construction that began in the 1920s, the Paramount competed — and still does, to some extent —- with another since-restored movie palace, the Fox Oakland Theater, which opened in 1928 and is operated by Bay Area concert promoter Another Planet Entertainment.

The Paramount had just put on a Buddy Guy show on March 6, 2020, and was preparing for an SFJAZZ event scheduled for the 11th and screenings of “Dark Girls 2” on the 13th and 14th when both events were canceled, said Paramount General Manager Leslee Stewart.

Stewart and the lean staff of the nonprofit organization that operates the Paramount have been eagerly anticipating the return to live events, be they jazz or rock, R&B or pop shows, private events or performances by the Oakland Symphony and Oakland Ballet, which call the Paramount home.

“I believe that we have an appeal to everyone,” Stewart said. “That’s part of our mission, to have a varied number of events that represent the community itself but draw in others from outside.”

Rattling off some of the shows and events that have been in the theater in recent years, Stewart names Tool, Björk (who Stewart says specifically selected the Paramount as one of the buildings in which she wanted to perform when routing one of her U.S. tours) and Paul Simon as examples of the diverse musical talent that’s been featured.

The venue also draws well with comedy shows by the likes of Russell Peters and Aziz Ansari as well as Hispanic-oriented and family shows, according to Stewart, who used to work for Feld Entertainment and says their productions like Playhouse Disney or Sesame Street Live have drawn well at the Paramount.

“We have a wonderful speaker series that (also) plays the North Bay and on the Peninsula (the area extending from Silicon Valley to just south of San Francisco),” Stewart said, referring to the MPSF Speaker Series put on by Jim Weil. “He’s been successful for upwards of 10 years with eight speakers a year. Very interesting, high-level people.”

Adding to the diverse event mix is a healthy dose of high school graduations, which fill dates in June when amphitheaters open and the theater business slows, and occasional citizenship swearing-in ceremonies.

July and August are typically the months when cleaning and maintenance work takes place, before the main September-June event season rolls around again, Stewart said.

Stewart said she was able to secure funds during the first draw of the federal Paycheck Protection Program aimed at giving financial relief to pandemic-affected businesses.

“We run a pretty tight ship. We’re certainly not top or bottom heavy,” she said. “Part of it is because we are nonprofit.”

The Paramount is operated and maintained by independent 501(c) nonprofit corporation Paramount Theatre of the Arts Inc.

“Nothing is inexpensive to repair or maintain,” Stewart said, explaining that historic preservation is always a consideration whenever any work is done, even putting up a fence around a storage area outside the theater proper.

The theater has a relationship with a local architect who in turn works closely with local preservation officials, which generally results in designs favorable to all parties.

Stewart’s predecessor, Peter Botto, was involved in the restoration of the theater. His vision was to maintain what the original architect Timothy Pflueger built, said Stewart, who came to the Paramount in 1999. “I’m a history major, so when I came and interviewed and saw the beauty of that theater, I personally and professionally do not feel that I can take license with what Pflueger did as the architect,” she said. “So, everything we do, and that’s part of the expense too, is authentically restored, to the detail.”

Even when replacing the carpet, which was done about five years ago, new material was matched to pieces of the original carpeting.

“When people walk into that building, you’re actually walking into exactly what (it) looked like in 1931,” Stewart said. “And we’ve had people who grew up in Oakland and went to the theater as children to see movies and they are struck because it’s exactly as they remembered it.”

One of the last capital projects completed was the two-year, $2.5 million restoration of artwork that adorns terra cotta tiles in the front of the building, Stewart said. 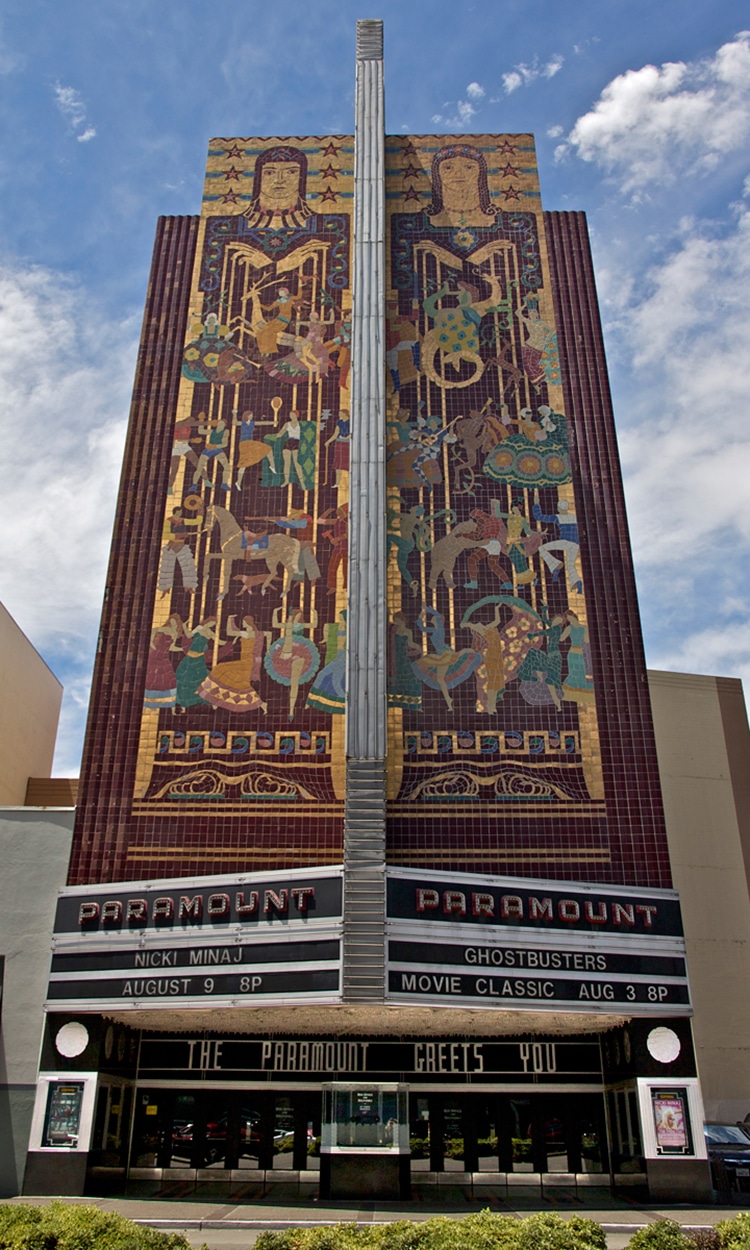 A recent $2.5 million project restored artwork that adorns terra cotta tiles on the front of the theater. (Courtesy Paramount Theatre of the Arts Inc.)

Paramount Theatre of the Arts Inc. has an annual operating budget of $2 million and is careful to keep funds in reserve for inevitable capital projects and other needs, she said.

After the original SARS epidemic struck in the early 2000s, Stewart, who had visited her native Canada and saw the effect of the virus there, decided the theater should have hand sanitizers throughout and had them installed nearly 20 years ago.

The theater operates according to OSHA guidelines, and while it has not sought Global Biorisk Advisory Council Star Accreditation, Stewart thinks the program is a good one and includes protocols that the venue was already following.

“It will be visible,” she said of sanitization and other health and safety measures. Just as visible security was part of restoring confidence following 911, so it will be in the post-pandemic world of live events, Stewart surmises. “It’s the same thing for COVID,” she said. “What are people looking for? They are just looking for a bit of effort, shall I say, and that’s what we intend to do.”

As for getting guests back in for events and when that might happen, Stewart said she is cautiously optimistic after California Gov. Gavin Newsom announced a full reopening as of June 15. She has a smattering of events booked, including a speaker in September, but she’s more confident that the venue will back in operation for a Nov. 25 show  by Mexican musical group Los Angeles Ázules.

Seeing how summer festivals and other events fare will factor into when the Paramount reopens, Stewart said.