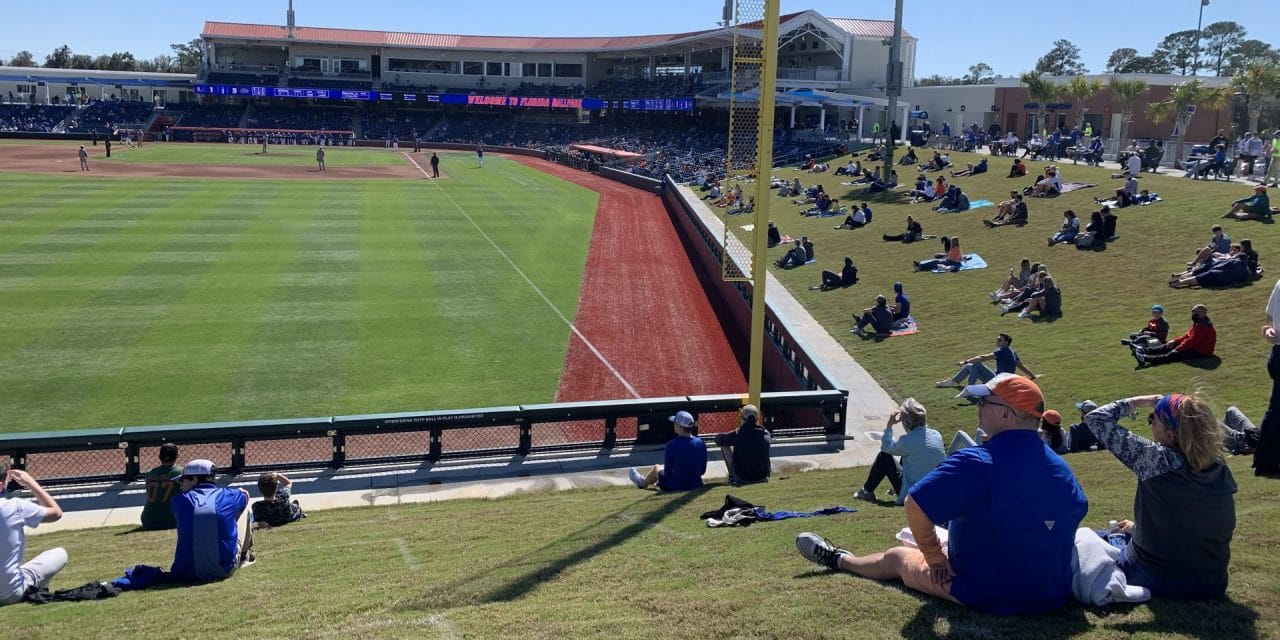 The University of Florida now has a college baseball stadium befitting its status among the NCAA’s top Division I programs. Florida Ballpark, a $65 million project, opened last weekend with a three-game set against Miami.

The 7,000-capacity venue, designed by Populous, sits on the southeast edge of the Gainesville campus.

It’s a big upgrade over McKethan Stadium, the Gators’ old ballpark, which opened in 1949. For one thing, the new building’s roof shades most seats behind home plate. That was not the case at McKethan, according to Scott Stricklin, Florida’s athletic director.

The lack of social spaces at the old park , which was torn down to build a new football practice facility, goes against today’s trends, Stricklin said.

“I have a 17-year-old daughter that in past years I couldn’t get her to go to a ballgame with me,” he said. “She went to every inning of every game last weekend because it’s a fun place to hang out.”

Florida Ballpark has some of the biggest grass berm space in the college ranks down the foul lines, said Jason Michael Ford, a senior architect and associate principal at Populous who worked on the project.

In addition, Dizney Grove, a large general admission space behind the outfield fence, offers a hangout with a craft beer garden and food trucks. Adirondack chairs face the field against the fence.

The practice field, made of artificial turf, is inside the park’s footprint. It converts to a kids zone during games.

The Gators have appeared in a dozen College World Series and won the 2017 national championship. The designers’ mission was to elevate fan experience to match quality of play, said Zach Allee, a senior architect and senior associate with Populous.

“Our baseball program has been really good for a long time, but there was nothing about the old park that encouraged you to want to come,” Stricklin said. “You just sit in the stands and watch the game. There was no social environment. This is the new wave: an open concourse, a berm area and lots of shade. That’s a big deal in Florida.”

Ballpark construction was completed in May, soon after the shutdown of sports and entertainment. The facility has 4,000 fixed seats and an open-air club on the second level tied to 800 premium seats.

The rest is berm seating and standing room space. When things get back to normal, Stricklin thinks the stadium can push attendance to 10,000 fans for weekend games that are typically the bigger draws.

“We needed a facility that doesn’t feel empty for midweek games and has expandability,” he said. “The standing room social areas become key for threading that needle. The huge berms became instantly popular last weekend.”

To that end, Populous inserted some design tricks to fill space and camera views when television broadcasts focus on the pitcher from angles along the first base and third base lines.

It was part of Stricklin’s vision for the new park dating to his tenure at Mississippi State, where he led the effort to redevelop Dudy Noble Field. Stricklin took over at Florida in 2016, three years before the Starkville project, which Populous designed, was completed in 2019.

“Mississippi State had aluminum bleachers down the lines that were historically empty except for postseason play,” Ford said. “Scott was tired of seeing that (view), so at Florida Ballpark, we put six palm trees behind the berm at the concourse along the first baseline.”

“It’s little things like that we collectively stumble upon,” he said. “There are so many things around this ballpark that are unique to Florida. It’s not just two guys from Kansas City trying to be Florida, but genuine design elements that we incorporated into the overall building and feel.”

Pugh Hall, a university classroom building, was the model Stricklin presented to Populous to help design Florida Ballpark to keep it consistent with the Collegiate Gothic architecture style of other campus structures.

“Florida had a history of having blue roofs on brick buildings that didn’t tie into anything on campus,” Ford said. “The ballpark does a good job of simplifying architecture and making it such that it represents the University of Florida.”

Stricklin said demand is high among Florida Gators supporters to see the new park, but many have to wait. During the pandemic, the SEC school is adhering to Centers for Disease Control and Prevention guidelines. Capacity is now restricted to 1,500, mostly season-ticket holders. Those on the berms sit between chalk lines defining spaces six feet apart, as mapped out by Populous.

Overall, those in attendance last weekend were hungry and thirsty. Despite the reduced crowd, the food and drink per cap was $9.50, which is $2 higher than last year, Stricklin said. It helps that concessionaire Centerplate has a full kitchen on site to develop a compelling menu, which is a first for an outdoor venue on the Florida campus, he said.

The Dizney Grove was named after Donald Dizney, who gave a financial gift to help pay for ballpark construction. Dizney, a health care magnate who owned the Orlando Renegades during their single season in the upstart United States Football League in 1985, has his name on the school’s soccer and lacrosse facility.

Learfield IMG, the university’s multimedia rights holder, is searching for a potential naming rights partner for Florida Ballpark. At one time, the school had in-depth conversations with an interested party, but things didn’t work out, Stricklin said.

“I almost feel like waiting after the offer we had out there to get better value,” he said. “College baseball has not been the social thing to do here because the facility was so bad. After we go through a season, people’s mindset is going to change and it will be more valuable down the road.”