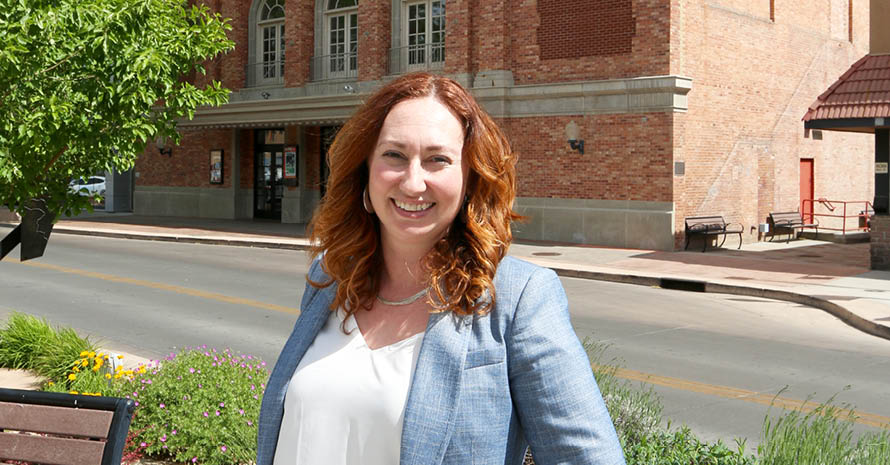 Maria Rainsdon grew up in the West, so it’s probably not surprising that she’s landed in western Colorado, where she is general manager of the Grand Junction (formerly Two Rivers) Convention Center and Avalon Theatre for Oak View Group.

She’s lived in Montana and Texas and graduated from high school in Silver City, N.M., not 500 miles south of Grand Junction. She started college at New Mexico State University in Las Cruces before transferring to Eastern New Mexico University in Portales, where she earned a bachelor’s degree in 2009.

Rainsdon attended the International Association of Venue Managers’ Venue Management School at Oglebay in Wheeling, W.Va., in 2013-14 and earned an MBA from the University of Colorado Denver in 2016.

She started her venue industry career in New Mexico as a part-time banquet manager for Global Spectrum at the Clovis Civic Center during her final month as an undergraduate.

“By some luck and lots of hard work, long days, like everyone in our industry knows, I was promoted to operations manager full time while still overseeing the banquet staff, and then when the general manager position became available I applied and was selected for that” in 2012.

In 2014, she accepted an opportunity to move to Buffalo, N.Y., where, still with Global Spectrum, she booked, planned, created and executed over 1,200 events at Canalside Buffalo, a 21-acre park along the Buffalo River next to KeyBank Center, home of the NHL’s Buffalo Sabres, which is under the auspices of New York state’s Erie Canal Harbor Development Corp.

“It was fast and furious,” she said., “I was there for just about a year, then moved to Denver and worked for the University of Colorado Denver in south Denver, which is a whole different world than private management, but still very much mass gatherings, banquets and sometimes an occasional beer festival.”

In 2017, she joined Pinnacle Venue Services, which was later acquired by OVG (also the parent company of VenuesNow), at the Grand Junction Convention Center and historic Avalon Theatre. OVG Facilities also runs the Amphitheater at Las Colonias Park, opened in 2017. All three are owned by the city of Grand Junction.

Asked what drew her to the venues industry, Rainsdon said she originally went to school to study music education with an eye toward becoming a band director. She still has a lot of friends in that world and sees parallels to her current line of work.

“Our jobs are not that much different,” she said, laughing. “We’re both putting on live events and getting a lot of people to do things in sync and work together; lots of organization, communication. I think it just really fit my skill set.”

Her work on the food and beverage side of things also led her to find enjoyment in the variable nature of running venues and staging events, each of them different and presenting a variety of challenges, she said.

Her favorite aspect of her job is being involved in the community.

“There’s no way to be, in my opinion, a very good venue manager without becoming part of the community,” she said. “We’re lucky here to be in a downtown setting, but even when I worked for the University of Colorado, the building I worked at was very much part of the community. It’s fun and you wouldn’t expect that part of booking and managing banquets and live ticketed shows is getting to be part of the fabric of a community.”

She described her management style as being deliberate in communications while trusting that she’s hired the best people she could find and that “trusting them to make the decisions is the best way to go about live events.”

“Certainly, there are fine details that need to be done in specific ways, but you’re only as good as the weakest link, right?”

How would she advise someone just starting out in the venues industry?

“To take calculated risks and to know that the people who are the most successful in this industry are the ones who put in the work and put in the hours and that if they’re meant to do this for a long time, they’ll enjoy that part of it too. But if the hours and the weekends are really not their favorite part of the job, then it may not be for them, because that’s when it happens.”

“She’s been with me since Clovis, N.M. She’s been all over the country,” Rainsdon said.

To recharge her batteries, Rainsdon also enjoys skiing and has plenty of options in her neck of the woods, and relishes enjoying her surroundings with friends. A favorite vacation spot is the Lake Tahoe area in Nevada and California.

Rainsdon also enjoys watching live sports — there’s nothing quite like a Buffalo Bills home game, she said — and is fond of the band Lake Street Dive.

“I’ve seen them a couple of times; we’ve had them at the venue I worked at in Buffalo and I’ve seen them in Denver,” she said. “I just really enjoy their musicianship. They’re fun to watch. But I like going to everything from comedy to the symphony. Seeing the Colorado Symphony at Red Rocks is definitely up there on my list of shows that I’ll never forget.”