Miami gears up for Formula 1 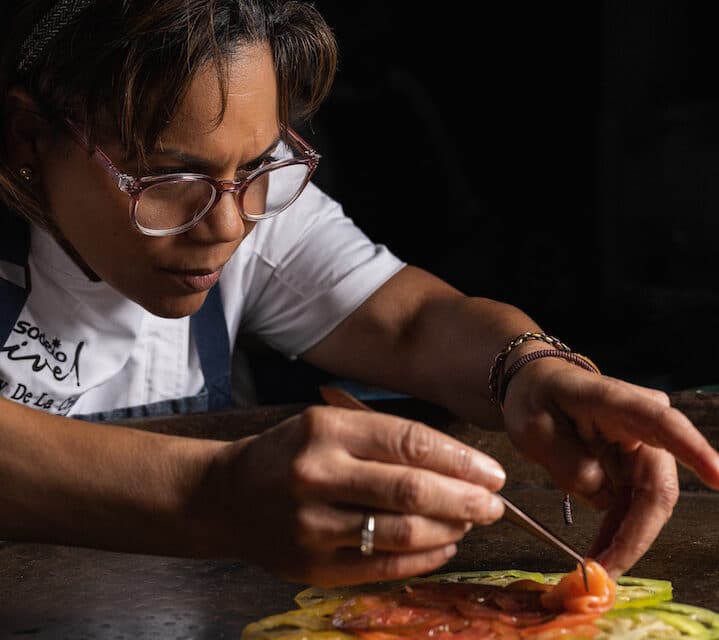 FINISHING TOUCH: Dayanny De La Cruz, Hard Rock Stadium’s executive chef puts the finishing touches on a salmon and tomato carpaccio, one of the items that will be offered at the Formula 1 Crypto.com Miami Grand Prix. (Matthew Noel photo for Sodexo Live!)

Expectations are revving up for the Formula 1 Crypto.com Miami Grand Prix when it debuts as the newest race on the F1 calendar May 6-8 in Miami Gardens with top international drivers, eager motorsports enthusiasts and a menu worthy of the winner’s circle.

It’s the inaugural event on the 275 acre property where Hard Rock Stadium, home of the NFL Miami Dolphins, sits. The spectator layout is split into eight, distinct zones that reflect local culture and lifestyle including a marina, beach club, and luxury suites for viewing the action on and off the track.

There will be plenty to see. The 3.36 mile Miami International Autodrome was constructed from 24,000 tons of asphalt and features 19 corners, three straightaways and has an estimated top speed of 135 mph.

Zachary Williams, director of Sodexo Live! at Hard Rock Stadium, the Dolphins’ food provider, put transforming the venue’s massive parking lot into a small city for race week in perspective: “That is a major chunk of land to cover,” he quipped.

Covering that area with high-end food and beverage is a challenge. A year in the making, Sodexo Live! will set up 70 different locations with three major production kitchens and satellite kitchens in each zone preparing fresh foods on event days. Each location will be fully stocked so that there are no delays for covering the vast distance and having to restock items.

“Each kitchen will operate independent of everyone else,” Williams explained. “Everything will be produced there and ready to go.”

Over the weekend, Hard Rock Stadium executive chef Dayanny De La Cruz and the Sodexo Live! culinary team will handle the menus at the campus around Hard Rock Stadium, including the terraces, villas, suites and the MSC Cruises Yacht Club. The chef will be supported by more than 2,500 workers and more than 30 culinarians flown in for the race. De la Cruz was executive when Super Bowl LIV came to Hard Rock Stadium in 2020.

“We have a great staffing department and we know what the expectations are,” he said.

“We want to provide for each guest at different levels; from the general admission grounds pass all the way up to the luxury clients,” he said. “We will have a value range and experience that fits every different guest we have.”

With a menu that looks significantly different from the typical NFL game day offerings, Williams said the Sodexo Live! team will be focused on detailed training of part-timers and making sure the first plate is as good as the last. When the gates open, he plans to be on the westside food hall, the largest on the campus: “I want to see them when they walk in that space and see options they don’t normally see. I’m excited to see people react to that.”

And when it is over, Chef De La Cruz and Sodexo Live! will work to donate unused food items to the Miami chapter of Food Rescue US, to help local missions and shelters around South Florida. The group regularly rescues food from Hard Rock Stadium and has kept three million pounds of food out of landfills since its start in 2018.