Vaccination Verification Program Will Be Rolled Into Clear’s Health Pass 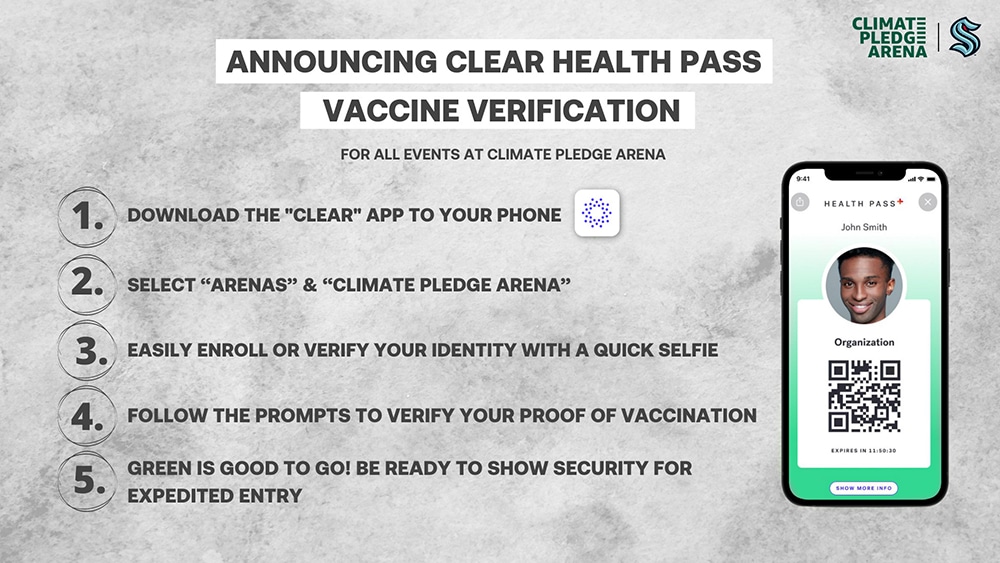 In the midst of the pandemic, the critical piece of technology has become part of the punch list of items for OVG, the arena developer, to complete before opening the NHL facility.

In Seattle, all guests age 12 and over attending Kraken games, concerts and other arena events are required to provide proof of vaccination upon entry.

All visitors 14 and older are required to download Clear’s Health Pass on their mobile devices. The free mobile application securely connects a person’s verified identity to their proof of vaccination.

After downloading the application, guests must complete a one-time enrollment to set up their Health Pass account. The process involves verifying identity and taking a quick selfie.

To add proof of vaccination, users can scan a smart QR code, directly link to a vaccine provider or pharmacy in Clear’s national network, or directly upload their official vaccination card.

To use the pass, guests open the Clear application, verify their ID and show the pass for access to the arena.

Ultimately, OVG would like to see the health pass as part of arena ticket provider Ticketmaster’s mobile application to eliminate patrons from having to open multiple applications, said Don Graham, the arena’s senior vice president of event services and assistant general manager.

“It would be a one-stop shop for us with the ticketing platform and our Axess ticket pedestals, which is scanning our ticket barcodes, but we’re not there yet,”  Graham said. “We want it to be just one swipe.”

OVG looked at five tech vendors before choosing Clear based on their adoption rate in the venue industry and easy-to-use system, Graham said.

“If we want to open at 100% capacity (in Seattle), everybody needs verification,” Graham said. “We’ve always known that here in this area. We had to figure out a tech-enabled process to make it easier for not only us as the arena but for the customer.”

“We don’t know how long this (pandemic) is going to go, but we’ve got to assume it’s going to carry over into the winter,” Mattson said. “We’re trying to adapt in a lot of ways with the axiom that we had with the (arena) app development, which is focused on expeditious elements for the guests, helping you get through the transportation process quickly, bathrooms, concessions, all those things.”

The operative phrase is a commitment to the health of arena patrons and the industry as a whole, said Eric Bresler, OVG’s senior vice president of programming at Climate Pledge Arena.

“If all of us don’t make that commitment, we’re not going to have events and workers won’t have the opportunity to work events,” Bresler said.

“We’re proud of what we’re doing, and what we’re seeing now is the business trying as a whole to come together. It’s taking some time, but look at artists such as the Eagles, Harry Styles, Maroon 5 and Foo Fighters,” he said. “They all require vaccinations, and more acts are lining up for the same commitment.”

In a move tied to the health and safety of patrons, staff, teams and artists at Climate Pledge Arena, OVG upgraded the building’s air handling system. The venue was designed with two 20,000-square-foot rooms at event level that are full of cutting-edge HVAC equipment to purify the air.

The system revolves around Minimum Efficiency Reporting Values (MERVs), derived from a test method developed by the American Society of Heating, Refrigerating and Air Conditioning Engineers and approved by the Environmental Protection Agency.

The MERV rating effectively measures an air filter’s ability to capture large particles floating in the atmosphere. The higher the number, the greater number of particles trapped by the system.

Climate Pledge Arena installed MERV 13 equipment, which provides a backstop of sorts from MERV 8 on the arena’s front end, which does its part to initially capture the big dirt and debris from outside air, Graham said.

Before that partly treated air leaves and goes into the seating bowl, it hits the MERV 13 filter, which captures small virus particles, the dangerous elements that may lead to sickness, he said.

All told, the air circulation quality provides 80% more fresh air through the upgraded filtration system as a result of “supersizing” it during the pandemic, said Tim Leiweke, Oak View Group’s co-founder and CEO.

“It’s the most sophisticated work of engineering I’ve seen to build this massive air circulation system and do it in a way to protect our patrons,” he said.

Graham said the air handling rooms were designed to allow engineers easier access to the equipment than in other arenas, where they have to crawl through small spaces with their tool kits to reach the systems.

In addition, Damon Murray, Climate Pledge Arena’s director of engineering, can control the air handling units through his smartphone and adjust the filtration system if necessary.

In the past, an engineer had to go into the bowels of the building to make an adjustment and then walk somewhere else for input to the computer, Graham said. That’s not the case at Climate Pledge Arena.

“We can do air circulation studies in every single room of the building to determine air flow and it gives us a chart,” he said. “We can see which ones we need to kick up a little bit or lower down and bring more fresh air from the outside. It’s all based on occupancy.”