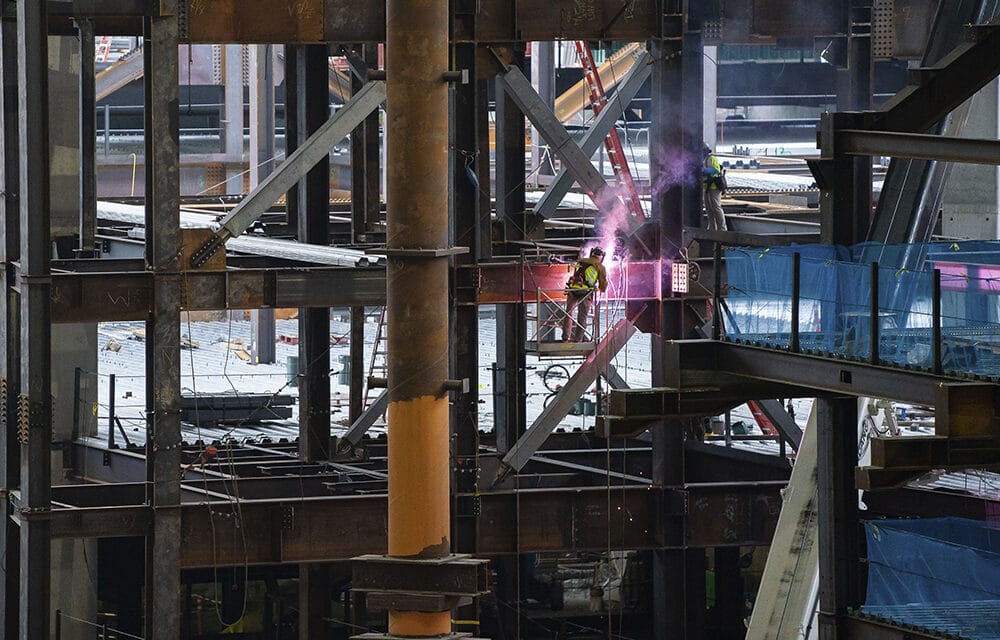 RAISING THE ROOF: Saving the historic roof meant keeping it suspended for two years to build a new arena beneath it. (Courtesy Mortenson)

The signature roof and the exterior glass provide key historical elements in the new Climate Pledge Arena, but retaining them as part of the building’s construction wasn’t easy.

The Seattle Landmarks Preservation Board’s historical designation of the building, long known as the Seattle Center Coliseum and originally built as the Washington State Pavilion for the 1962 World’s Fair, helped developers gain funding on the project. It also, however, forced creativity when working to completely transform the arena footprint.

That creativity included floating a 22,000-ton roof while the new arena was built underneath.

The original cable-supported roof designed by architect Paul Thiry in 1962 underwent massive renovations in time for the 1995 NBA season (when the facility’s name changed again, to KeyArena), but the 20 original Y columns, the four buttresses and a 30-foot-wide concrete beam have held the roof for decades and kept the hyperbolic paraboloid roofline intact, making it an integral part of the Seattle skyline.

The existing roof support, however, did not go deep enough to handle a plan that called for the removal of 600,000 cubic yards of earth to expand the arena’s area to roughly 800,000 square feet and place the ice for the NHL’s Seattle Kraken 53 feet below ground.

That’s when the engineering team of Thornton Tomasetti stepped in with a plan that cut the roof’s support columns from their original foundations, supported the roof temporarily with 72 steel columns and a crossbeam steel reinforcement structure, and excavated down sometimes as deep as 90 feet below ground to make it work.

“The pace of this project was incredible,” said Shawn Leary, Boston-based principal for Thornton Tomasetti. “The steel for the shoring was enough to build another building. We designed a complex (system) and got it erected and installed in 10 to 11 months.”

The process required crews to build a 3,300-ton steel structure that started going into place in January 2019, and the roof was completely sitting on shoring by November of the same year. The new foundations for the columns extended deeper and reconnected to the original columns.

The trickiest part of the process — apart from creating a structure that could handle seismic loads while suspending an existing roof — was the support of the south buttress, which was bearing a significant amount of the roof weight. That portion necessitated distinctive geometry for the shoring.

“We’ve done every piece of this before, but never all the pieces combined into one great project like this at one time,” said Steve Hofmeister, Thornton Tomasetti managing principal and structural engineering practice leader.

The planning required cooperation between every party involved. As the steel shoring was being set, excavation was occurring, all sequenced to keep the roof stable. “We had to design everything and anticipate what the supports were going to be,” Leary said. “The support for the roof changed almost daily.”

When Mortenson crews came in to build the new arena underneath the floating roof, Hofmeister said, there were “zero conflicts” between the new arena steel and the temporary steel. “No oopses, whoopses or conflicts,” he said.

Leary said extensive use of virtual reality helped to see how the old columns and shoring merged with excavation and new arena supports.

“We had to be able to, on the fly, understand what the conditions were on the site and know if that was matching up with what we had assumed,” Leary said. “To put on the headset in Boston and walk through the building and see the installation, you could see how it was all going to go together.”

Working the 200 new footings for the arena with the existing footings of the roof required heavy coordination throughout the project. “The timing of all of that — the gymnastics we had to do was more like ballet, actually,” Hofmeister said.

Eugenia Woo, director of preservation services for Historic Seattle, a nonprofit dedicated to preserving the city’s architectural heritage, said she was thrilled that the building had new life and wasn’t demolished. “Given how the building was originally designed and constructed, it was important to keep the roof form, shape and any structural components needed to retain character-defining features of the landmark,” she said. Since the interior was already altered during the previous renovation, it became even more important to preserve significant exterior features.

Beyond the roof, the glass façade serves as the other major exterior historic component. The arena featured glass, with steel mullions holding it in place, from the roof level to the entry. That 30,000 square feet of glass was taken off the old arena, cataloged and stored in a nearby facility before reinstallation on Climate Pledge Arena.

“This project shows that it’s possible to respect the historic character of an iconic midcentury modern Seattle icon,” Woo said, “and update it as a state-of-the-art multipurpose venue.”

CORRECTION: Because of an editing error, an earlier version of this story mischaracterized Historic Seattle, which is a nonprofit organization.