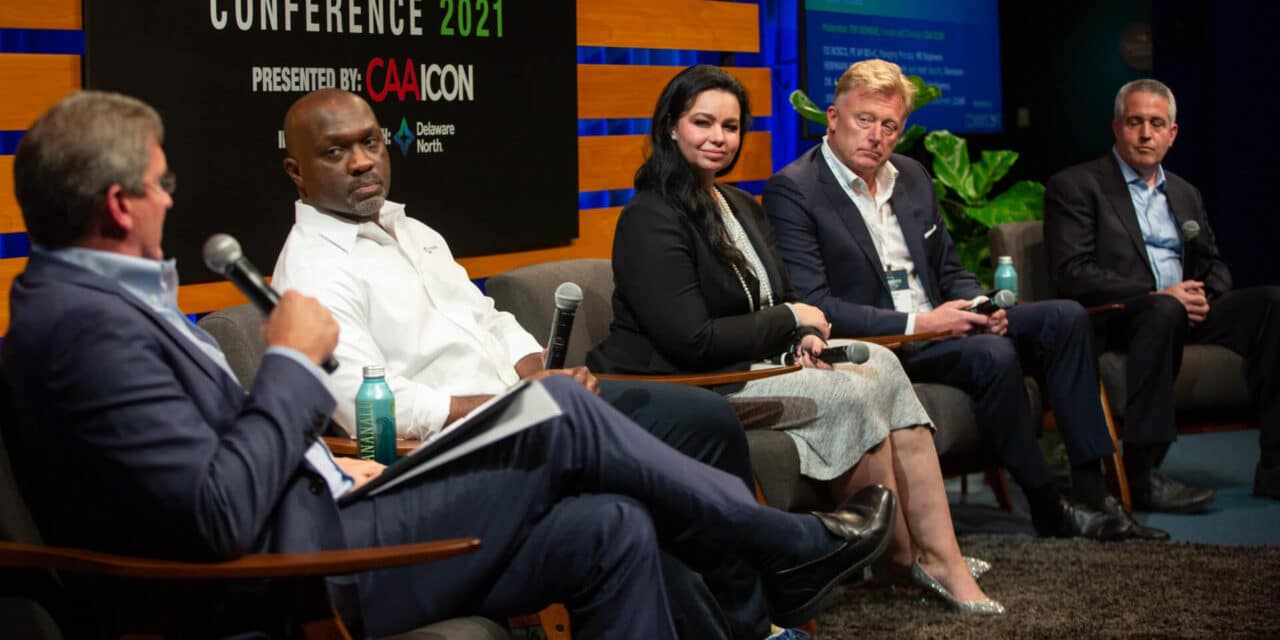 Expert says the simplest things, like being vaccinated, go a long way toward conquering fear

“What we’re not going to do today is relive COVID-19,” moderator Tim Romani, founder and chairman of CAA Icon, said Thursday at the start of the panel “Health, Safety and Sanitization: Considerations for Future Venues.”

“We were all there. It sucked. We don’t want to go back there,” he said. “When we were talking as a panel, we said what we really want to do is take what we’ve learned and look to the future for COVID-25, God forbid, or SARS-28, and what are we doing now to prepare ourselves, so our lives and our industry isn’t as devastated as it was before.”

With that, Dr. Kristina Elizabeth Hawk, who teaches at Stanford and is president of Ampersand Intelligence, a company she and her father started in response to the pandemic to bridge the gap between medicine and human experience, spoke of lessons missed from the pandemic and the need to follow the science.

“I think there’s a difference between complex and complicated,” she said. “The science is beautifully and elegantly complex, but we don’t need to make it complicated. We can really boil it down to some very simple lessons.”

At Stanford, she said, “we talk about practicing evidence-based medicine.”

“I think we needed to learn as an industry to practice evidence-based sports and entertainment,” Hawk said.

Guests are capable of change but often resist it because of fear, she said, adding that the antidote is education and giving people the tools they need to effect change.

“What we’ve learned is that the simplest things work: being vaccinated, basic protocols like hand sanitization, wearing a mask,” Hawk said.

People have generally come to adopt a new culture of health and safety “as they’ve gotten rid of their fear, she said.

Ed Bosco, managing principal for ME Engineers, which worked on Climate Pledge Arena, said he was part of an Oak View Group task force studying the coronavirus, having seen the virus spread abroad.

“We began an information collection period,” he said. “It continues now, but we’ve spoken to about 200 different manufacturers of products and services to try to sort out the ones that make sense from the ones that were challenging.”

His company, which has a substantial healthcare practice, analyzed stadiums and arenas as if they were hospitals.

Many venue HVAC systems already had the capacity to bring in more outside, so it was a matter of training venue operators how to deploy their systems, he said.

“What’s important to us is that we can’t think about the future and building new buildings this way; 90% of the buildings that will exist in 20 years are already constructed,” Bosco said. “So, we need a solution that goes backwards and lets us address the buildings that exist now and may not have an opportunity for a major transition. Our goal has really been to take the existing building stock and make it safer.”

The HVAC technology ME Engineers has been deploying in venues for the last 10 years is well suited to deal with the pandemic, he said.

Former NBA executive Jerome Pickett, who in January became senior vice president and general manager for sports and entertainment at Clear, spoke of his work as NBA crisis manager as the pandemic unfolded.

By the time the league halted games March 11, 2020, its internal task force had been studying the coronavirus for two months, he said.

“We had contracted with the best virologists and epidemiologists in the world to understand what was happening with the virus,” he said.

Officials thought the pause in play would last four weeks or so, but it ended up being five months before the bubble was started at Disney’s Wide World of Sports near Orlando, Florida, Pickett said.

With Clear, which uses biometrics to speed entry into venues and airports for those who opt in, Pickett has helped spearhead the launch of the company’s Health Pass verification product.

“This is a message being sent that the pandemic is over and all these lessons learned are things of the past and we can just move forward,” he said. “Something that’s important to us is not talking about a solution that was built in response to a pandemic, but is built in response to the future. They say to never waste an opportunity. The lessons we’ve learned are too valuable to not keep in place in some way.”

Through the pandemic, operators developed proprietary, unique standards for their brand or venue, he said.

“That was their approach to staying busy or finding a solution to the best of their ability,” Elger said. “What we need to do now is let everyone get back to doing what they do best and let a third party really manage all of these standards. We’re a protocol delivery system and I believe the future represents an opportunity to take these lessons learned, ensure that we are all working on the same platform and ensure that anyone who has protocols or requirements to successfully execute live events be able to plug into the same system, so that we’re not having to ever be put at risk to have to take down our business to the degree that we did, or even delay it slightly, or even put it on hold. We can be much more anticipatory.”