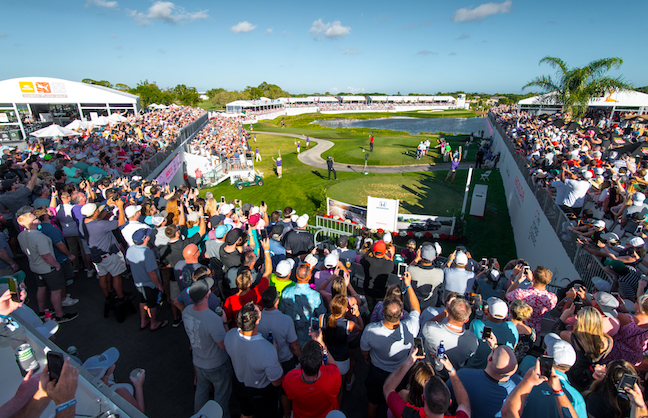 A view of the “Bear Trap” during last year’s Honda Classic PGA Tour event at PGA National Resort in Palm Beach Garden, Fla. (Courtesy Honda Classic) PGA Tour event looks to keep the party going by beefing up signature area Tournament organizers at the Honda Classic have set a bigger Bear Trap to capture more patrons and create a festive atmosphere at this week’s PGA Tour stop. They’re gearing up for another record week of attendance at PGA National Resort in Palm Beach Gardens, Fla. Structures comprising 2,500 square feet have been added to the area around hole Nos. 15, 16 and 17, which make up the so-called Bear Trap. The nickname is derived from the Golden Bear, Jack Nicklaus, who in 2002 redesigned Tom Fazio’s original layout. “That has become the nucleus of the tourney for us,” said Ken Kennerly, executive director of the Honda Classic, adding, ““The 17th […]
To access this post, you must purchase Subscribe to VenuesNow – 1 Year, Subscribe to VenuesNow – 2 Years or Subscribe to VenuesNow – 3 Years. If you are already a member of VenuesNow, please login here: log in