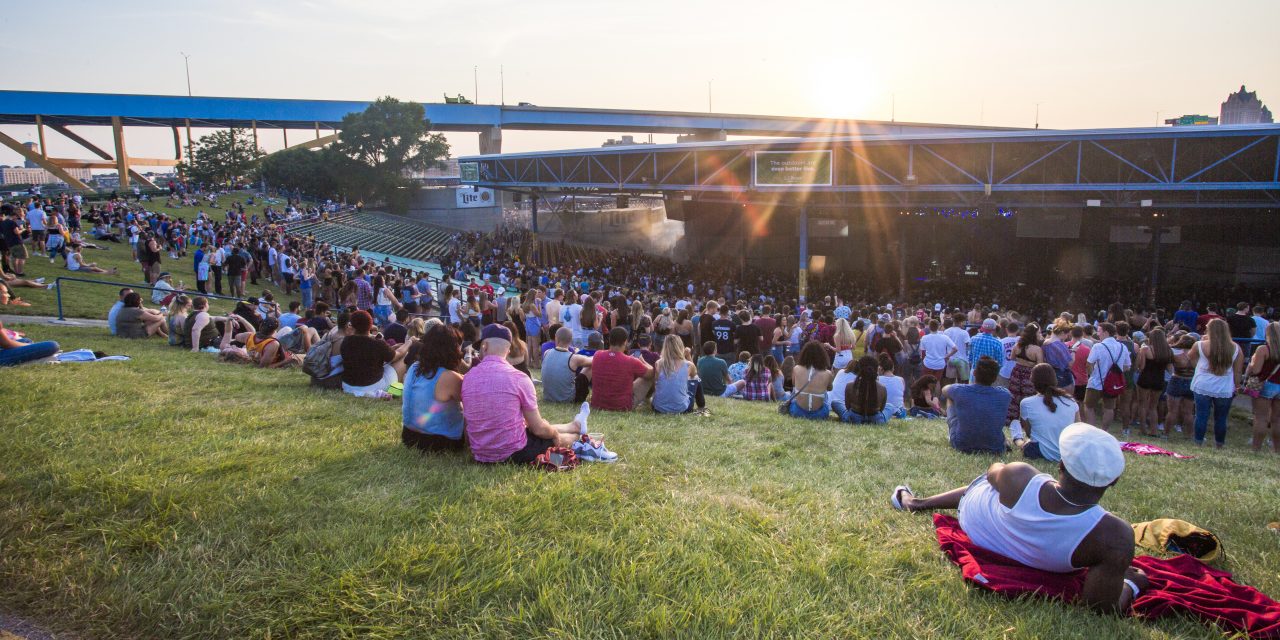 Summerfest, the Milwaukee festival that bills itself as “The World’s Largest Music Festival,” had another smashing year in 2018. From June 27 to July 8, mega-touring artists including Dave Matthews Band, Blake Shelton, Journey and Def Leppard, Shawn Mendes, Imagine Dragons, Arcade Fire and The Weeknd headlined the event’s flagship venue, American Family Insurance Amphitheater, comprising the high-profile tip of a lineup iceberg that featured several hundred performers scattered across a dozen stages in Henry W. Maier Festival Park, situated on the shores of Lake Michigan.

The festival posted an attendance figure that, in a vacuum, appears gaudy: Over 11 days, it drew 766,192 attendees to the 75-acre park. But, by Summerfest’s standards, the number was underwhelming. For only the second time this century, the festival failed to exceed 800,000 attendees, falling off 8 percent from 2017 and posting its lowest attendance since at least 1993.

While high heat and two rainy days surely had detrimental impacts, the attendance dip was indicative of a larger trend. Summerfest, which cracked 1 million attendees in 2001 and 2002, hasn’t topped 850,000 since 2014 and hasn’t surpassed 875,000 since 2011. In a changing festival market, Summerfest – launched in 1968 – can’t afford to rest on its laurels.

“It was a state-of-the-art facility” when it was built in 1987, Gosse says, but now, “quite frankly, we can’t fit some shows in our venue. And new venues around us are competing with us. They’re getting shows and we need to stay competitive.”

Don Smiley, President and CEO of Milwaukee World Festival, Inc., adds that the renovations weren’t plotted merely to make the amphitheater competitive now. “It was important to take a holistic view of the amphitheater, which is 32 years old, and really plan for the next 20, 25 years of providing music and shows that Summerfest fans have become accustomed to seeing and enjoying,” he says.

With that grand a mission, there was no expense too great. Three decades after their Summerfest forebears created a state-of-the-art amphitheater – which was known as Marcus Amphitheater until 2017 – Smiley, Gosse, and the rest of the Summerfest team wanted to overhaul the venue to make it analogously modern. “People expect more when they go out and see a show,” Gosse says. “In order for us to stay competitive, we knew it was time to renovate the amphitheater.” 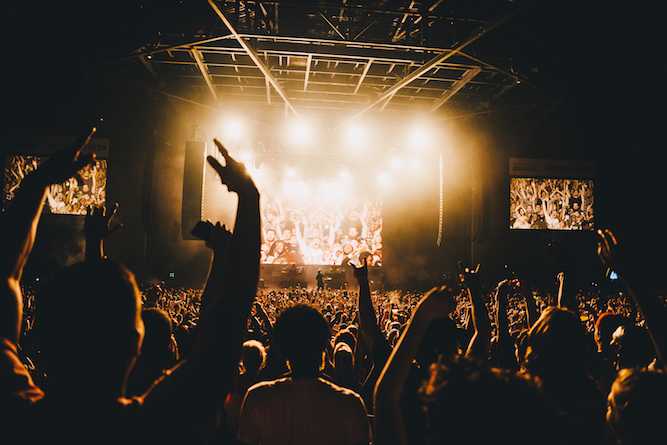 A crowd watches a performance last year under the American Family Insurance Amphitheater roof, which was lifted 26 feet during the offseason. (Judy Won)

That meant embarking on a renovation project that, broadly speaking, consisted of two prongs: improving the amphitheater’s production capabilities and bettering the experience for the fans who come out to see the world-class productions and performers Summerfest courts year in and year out.

“We originally envisioned doing this major remodel beginning this summer,” Gosse says. “We always build in our off-season. We’ve never had something under construction during Summerfest. We envisioned starting it right after Summerfest ’19 and having the grand opening in 2020.”

A crucial element of the Summerfest team’s plan, however, was to raise the roof 26 feet, to bring it to a formidable 65 feet, and the challenges and intricacies presented by that element of the project – primarily the degree to which it would prohibit simultaneous construction beneath and around the roof – meant planners had to reassess the time table for the renovations. And for the Summerfest team, continuing to push back the grand opening of a fully renovated American Family Insurance Amphitheater wasn’t an option.

“Rather than postpone our grand opening another year,” Gosse says, “we added a front-end year onto our schedule.”

When yet another impressive slate of Summerfest headliners – from Billie Eilish, Willie Nelson and Schoolboy Q to Jennifer Lopez, Bon Iver and Jason Aldean – descends on American Family Insurance Amphitheater beginning June 26, they’ll be greeted with production capabilities and artist amenities on par with the world’s best. “Whatever show can fit in a stadium or arena can now fit in this amphitheater,” Smiley says.

And, once Summerfest wraps, crews will go right back to work, improving fan-facing aspects of the amphitheater, from bathrooms to concessions.

“We felt that we had to do a rehab job on our building to stay competitive,” Smiley says. “When a building is 30-some years old, you have to do something with it – and that’s exactly what we’re doing.”

As last summer began to fade, Gosse and his team got to work on the first stage of renovations to the amphitheater on Sept. 15. Eppstein Uhen Architects were brought on as the project’s lead architectural firm, while Hunzinger Construction company was enlisted as construction manager.

“We are so proud to be leading the construction team of the American Family Insurance Amphitheater renovation because back in 1987, Hunzinger built this venue,” Hunzinger Vice President Field Operations Joel Becker said in February. “I ran the construction crews that built the amphitheater 32 years ago and I am here again supervising this amazing upgrade.”

The roof raise, which had precipitated the late 2018 and early 2019 construction initiative to begin with, was obviously top priority. But it created something of a domino effect with the rest of the venue that made the rest of the stage one agenda fall into place.

The backside of the amphitheater’s roof shared beam support with the roofs of the venue’s dressing rooms. A substantial modification to the venue’s roof would be impossible to undertake without impacting those artist facilities, so the Summerfest team grabbed the situation by the horns.

“We made the conscious decision to, rather than remodel the dressing rooms, tear them down and start over,” Gosse says. “It made [the roof raise] easier. Not cheaper! But there’s a difference between renovating the dressing rooms and building new ones.”

Rethinking the venue’s dressing rooms – which now total 19 – allowed Summerfest’s planners to move the stage itself back. The amphitheater’s three-foot-high fixed stage has now been replaced by a five-foot-high flexible, removable stage, which allows performers to modify its dimensions – or, in the case of performers like Jennifer Lopez, who brings her “It’s My Party” tour to town on July 3, to replace the stage entirely with one of their own.

The effects continue to ripple out. To facilitate load-in for modern, high-concept concerts, American Family Insurance Amphitheater now features nine loading dock bays, which can accommodate 13 semis. And to host the personnel for those shows, the venue features expanded production office space and a new dining room to feed talent, tour crews, and venue staff.

Audiences will also perceive shows in new ways. For one, while the stage’s additional two feet of elevation may sound minimal, Gosse says it’ll pay noticeable dividends for sightlines. And should fans have difficulty seeing the stage, they’ll be able to turn to one of six new permanent LED screens that replace outdated projection ones. “The guy in my office that’s procuring it tells me that nobody else in the United States has 4K video in amphitheater right now,” explains Gosse, with a hint of amazement in his voice.

But attendees who want to understand the scope of the changes to American Family Insurance Amphitheater won’t necessarily want to look at the stage and LED screens – they’ll want to look up, at the gargantuan roof that construction crews raised by 26 feet.

Hunzinger orchestrated the lift in conjunction with several other firms. From mid-September to early February, crews worked to prime the half of the current roof – the part that extends from the stage over the front reserved seating area – for lifting, preparing foundations and putting new steel columns and trusses in place. Summerfest enlisted Houston-based company ALE Heavylift to do the lift itself. The firm has completed the world’s heaviest commercial lift in Brazil – or, as Gosse puts it, “all they do is raise things.”

The lift didn’t happen in a blink, but after months at work, it almost seemed like it did. “We spent four months preparing for the roof lift, with all of the infrastructure required,” says Gosse, laughing. “ALE Heavylift came in and raised the roof in four hours.”

The roof raise – and the suite of production improvements that accompanied it – was key, and had to happen first. “You almost couldn’t do the roof lift and the dressing room demolition after the public stuff, because you’d kind of wreck some of that stuff,” Gosse says.

‘ALL ABOUT THE CUSTOMER’

Attendees of Summerfest 2019 will enjoy the fruits of American Family Insurance Amphitheater’s increased production capabilities. But the renovation’s true scope won’t be felt until 2020, when changes to fan amenities and facilities will have gone into effect.

“The addition of restrooms, restaurants, and hospitality all play into the long-term vision,” says Smiley.

The improvements on deck, which will begin July 15, all revolve around “how we’re delivering product to the customer, other than the act,” according to Gosse. Many of the changes will sound familiar to patrons who have frequented venues built in the last 20 years. From a concessions perspective, fans will only need to get into one line to order food and beer, and the quality of those respective offerings will be improved. 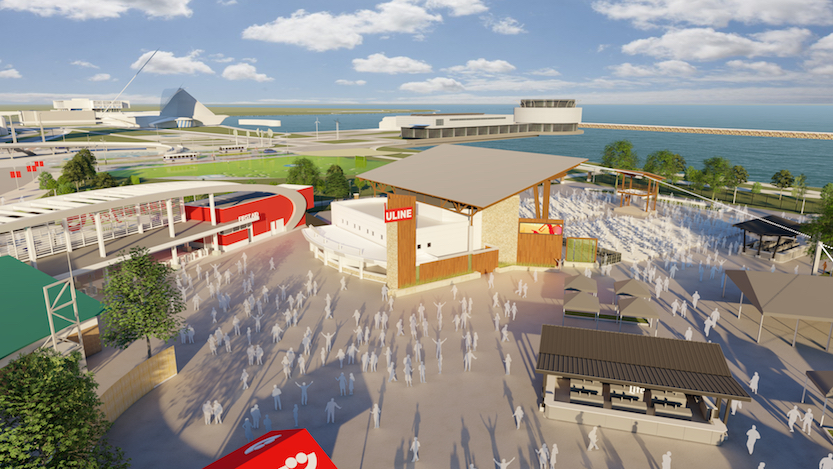 Fans will also feel more connected to concerts, even when they’re in the venue’s concourses, thanks to video screens being installed in bars. “You feel like you’re still part of the show,” Gosse says.

Summerfest plans to remodel bathrooms, expand concourses, and build new VIP hospitality areas. “We really want to bring something better back to the customer,” Gosse says, “because it is all about the customer.”

The dual approach of improving patron experience and production capabilities was less intuitive that one might think. Gosse says he and other Summerfest executives traveled to “see what other venues had to offer” and were impressed with amphitheaters like Maryland’s Merriweather Post Pavilion and Virginia’s Jiffy Lube Live. But while the former had top-tier accommodations for performers — including a swimming pool — it “didn’t have the amenities for the public.” Jiffy Lube, on the other hand, “was all about the public, and not so much for the performer.”

The American Family Insurance Amphitheater’s renovation project isn’t the only one Summerfest has undertaken since last year. Situated on Henry W. Maier’s north end, the Uline Warehouse Stage, which was built in 2000 and can seat 6,000, also underwent substantial changes.

With locally sourced lannon stone and cedar incorporated into the new stage, the lakefront venue will take on new aesthetic life this summer. But it’ll also pack more of a production punch, with improved lighting, sound, and a new video screen, and offer amenities from a permanent bar area to an ADA area with easier access and better sightlines.

Uline “predominantly paid” for the project, with “some money” from Milwaukee World Festival, Inc., according to Smiley. That’s a “completely different situation” from American Family Insurance Amphitheater, which received contributions from its namesake and Milwaukee World Festival Inc., but also was underwritten by a bond deal and will benefit from about $10 million in private funds.

“It’s not like Summerfest can afford to knock down all these buildings and rebuild them on our own,” Smiley says. “By and large it’s driven by the generosity and the commitment of our sponsors.”

Summerfest, Smiley points out, is more than an eclectic gathering of premium musical talent – it’s also an event that has $186 million in economic impact on the region every year.

American Family Insurance Amphitheater, Uline Warehouse Stage, and other projects are all part of a long-term plan Smiley implemented when he joined Summerfest in June 2004. “It became obvious to me immediately that the entire site really needed to be rebuilt,” he says.

Smiley, who as president and CEO of the Florida Marlins in the ’90s oversaw the team’s 1997 World Series championship, says that while he’s traveled the world extensively and is especially familiar with the music and festival scene in South Florida, Summerfest is singular. “It’s a beautiful, great setting for an outdoor music festival,” he says. “I’ve just never really seen anything like we have here in Milwaukee on the western shore of Lake Michigan.”