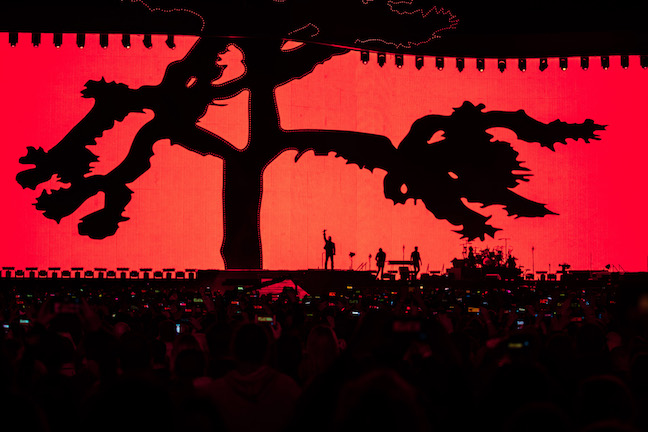 Bono, The Edge, Larry Mullen Jr. and Adam Clayton of U2 perform Nov. 15 at Marvel Stadium in Melbourne, Australia. (Getty Images) ‘Joshua Tree Tour’ takes root in Australia, plus a knockout boxing gross In Australia, two shows of U2’s “Joshua Tree Tour” took the top two spots on our More Than 15,000 Capacity chart this week. The band’s show at Marvel Stadium in Melbourne was No. 1, with a gross of $6,909,669. The show at Suncorp Stadium in Brisbane grossed $5,043,387. Over 105,000 fans paid $29.07-$239.58 to hear the band play their biggest album live. The tour is promoted by  Live Nation Global Touring. Big Las Vegas boxing matches are always a major draw and Golden Boy Boxing: Canelo vs. Kovalev, hosted at the MGM Grand Garden Arena in Las Vegas, didn’t disappoint. The much-hyped match for the light heavyweight title punched its way to the No. 1 spot […]
To access this post, you must purchase Subscribe to VenuesNow – 1 Year, Subscribe to VenuesNow – 2 Years or Subscribe to VenuesNow – 3 Years. If you are already a member of VenuesNow, please login here: log in