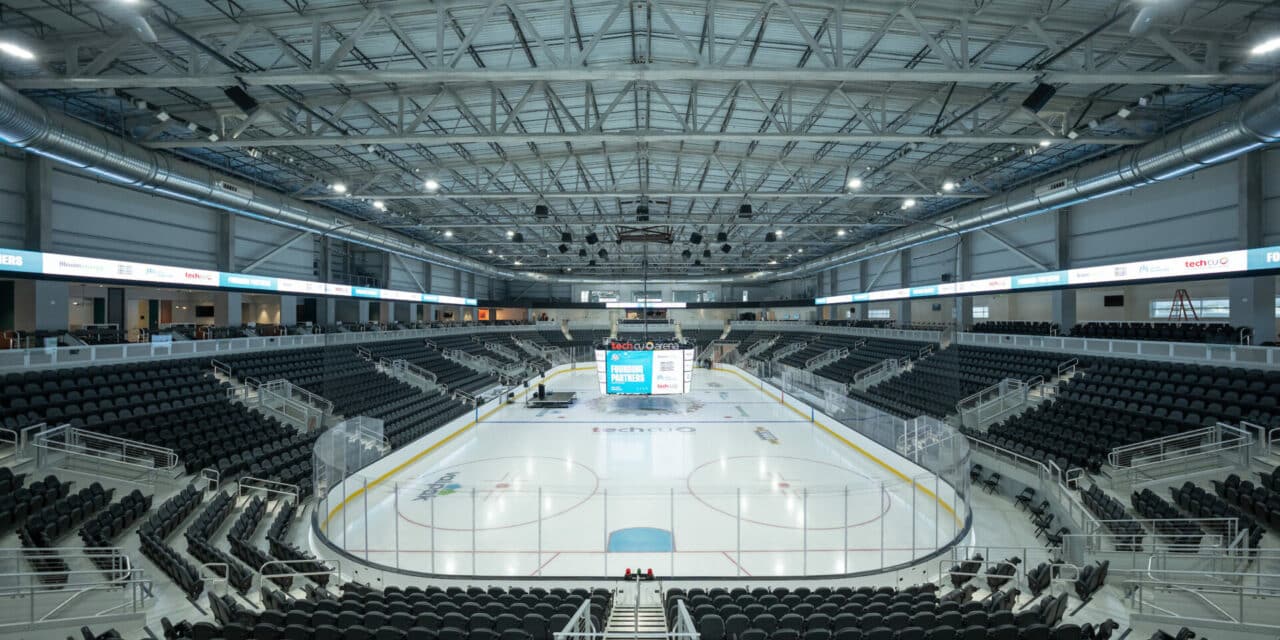 ICE IS NICE: The new Tech CU Arena, home of the AHL San Jose Barracuda, is the showpiece of the expanded Sharks Ice at San Jose facility. (Courtesy Team)

New 4,300-seater will free up dates at SAP Center

The arena has LEED silver certification and features Bloom Energy cells that provide 1.5 megawatts of power, LED lighting, an electric Zamboni and electric vehicle chargers. The six total sheets position the arena as among the largest ice surface facilities in the U.S.

In January 2020, the city council approved the expansion of the public skating facility known as the Sharks Ice at San Jose. The project doubled the size of the venue to about 400,000 square feet, adding the 4,300-seat Tech CU Arena.

Construction was financed by $150 million in city bonds with the Sharks responsible for debt payments.

“The city is essentially getting this world-class amenity for nothing,” said Jon Gustafson, senior vice president and general manager of the SAP Center — home of the NHL San Jose Sharks, and formerly where the Barracuda played — as well as Sharks Ice.

“Certainly, the showpiece of the facility is Tech CU Arena, Gustafson said. “It has 12 suites, a theater box, eight loge suites, seven different food and beverage options, a sports bar and three clubs.”

The arena serves as the Sharks’ new practice facility as well as home ice and training facility for the Barracuda, which came to San Jose from Worcester, Massachusetts in 2015.

Gustafson said most centers of this type live and die by events they bring in, but that’s not necessarily the case here. 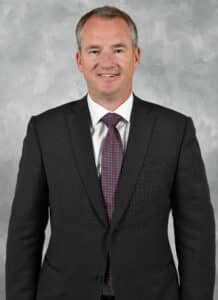 “We have such a robust recreational program, whether it’s adult hockey, youth hockey, high- and low-level figure skating, curling, corporate events, we could utilize the facility on a daily basis, but at the same time really go out and look for unique events that benefit the community and the facility,” he said. “We’ve already booked USA Hockey national tournaments. We’ve got the NHL rookie tournament that’s going to break in the building on Sept. 16, where we’ll have six NHL teams here, and their young prospects will play in a tournament.”

Officials at Sharks Sports & Entertainment, parent company of the Sharks and Barracuda, see small concerts and other sporting events like volleyball and basketball finding a place in the new arena.

“It’s kind of an open palette for us and we’re just going to kind of grow into it,” Gustafson said. “We have the luxury of not trying to push events too quickly because we can fill the ice every other hour with our recreational programming.”

“Our management team and all of our coaches can see all of our talent on a daily basis,” he said, noting that it was a challenge to quickly bring in a player from Worcester when an extra skater was needed.”

The six other AHL teams on the West Coast felt the same way, “that’s why we designed the Pacific Division,” Gustafson said.

As for the interplay between the new facility and SAP Center, Gustafson said the big league venue has more event dates available and the Barracuda didn’t need that large a space for the 3,000 to 4,000 fans per game that the team aims to draw.

“No matter how good of a team, it really causes challenges to create an ideal atmosphere in a large building like that,” he said. “Furthermore, it’s much more expensive to operate. So, it will allow us, with SAP Center, to go harder at more events and not have any impediments. Smaller events that don’t make sense at SAP Center we can go after include family shows and smaller musical acts that are popular but don’t make sense in the larger facility.”

The same SAP Center booking team, led by director of booking and events James Hamnett, will be in charge of booking events at Tech CU Arena.

No concerts are booked yet, but there have been some walk-throughs with key promoters.

“We’re not rushing into this,” he said. “We having lots of conversations to see what would make sense and to start to create a little bit of hype and probably engage after the new year.”

With a minimum of 36 Barracuda games, the arena would ideally see four to five major ice events each year in the form of skating competitions and hockey tournaments. 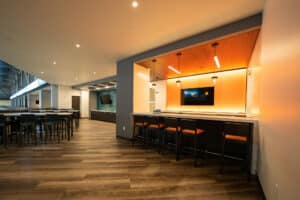 “In peak times, it would be great to have up to 24 larger events, maybe two a month,” Gustafson said.

Getting the project done during the pandemic was no small task, he said, crediting Devcon Construction and the design-build collaboration between Perkins and Will and Devcon Architects.

“It was totally constructed during COVID. Kudos to our construction team, our design team, all the subs,” he said. “We’re coming in on time and on-budget, which is unheard of. We took a very good calculated risk prior to project approval and had bought the steel probably a year before we started.”

A lack of steel was the most important thing that could hamper the development of the pre-engineered metal building, Gustafson said.

“We solidified our product cost of that major component, which really paved the way for us moving forward,” he said, adding that supply chain issues were already apparent before the pandemic struck in earnest. “Right before COVID, that was the peak of the market and there was unprecedented construction, especially in  northern California, so our consultants and our contractor had constructive discussions about ‘what-ifs.’ We tried to mitigate our risks as much as we could, and it turned out to be a brilliant move.”

A little over 900 Barracuda season tickets have been sold so far, Gustafson said.