In Columbus, a Study in MLS Stadium Evolution 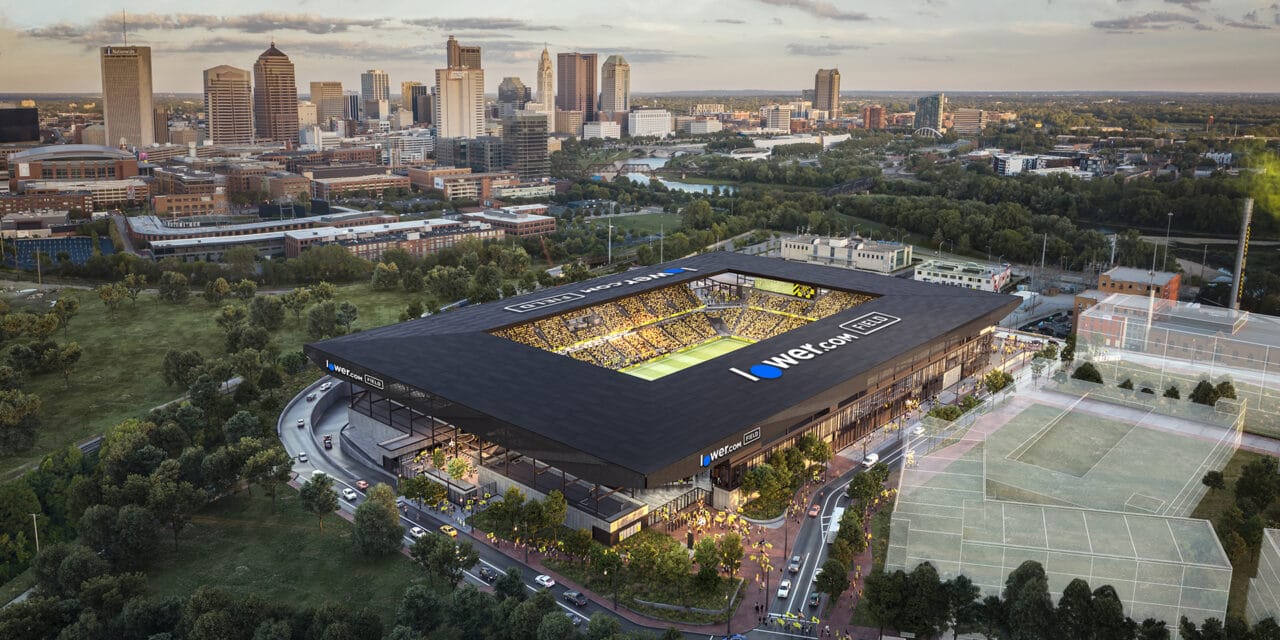 The debut of Lower.com Field, the Columbus Crew’s new stadium, on July 3 brought a new era to Ohio’s capital, 22 years after the team became the first Major League Soccer club to open a soccer-specific facility.

A lot of things have changed since Historic Crew Stadium opened in 1999. MLS venues have evolved into more complex buildings with sophisticated design, cutting-edge premium seats, innovative roof lines and supporters sections becoming their own mini-venues of sorts.

Over the past three decades, they’ve also become a lot more expensive.

The Crew’s old facility was built for less than $30 million and without a roof canopy, indicative of the bare-bones design of early MLS venues.

By comparison, the team’s new 20,000-seat stadium cost $314 million, an expense shared among Haslam Sports Group and the Edwards family, co-owners of the Crew, plus Franklin County and the state of Ohio.

All told, there’s really no comparison, but it’s noteworthy to see the evolution of stadium development in a sport that continues to grow rapidly across all levels, resulting in the demand for new facilities to showcase the world’s game.

For Gerardo Prado, national sports practice leader at HNTB, the architect for Lower.com Field and a soccer aficionado, the history connecting the two venues tied in more directly with the “Save the Crew” movement.

In early 2019, Jimmy and Dee Haslam, owners of the NFL’s Cleveland Browns, and Columbus orthopedic surgeon Dr. Peter Edwards, who had served as the Crew’s team doctor, acquired the MLS franchise. 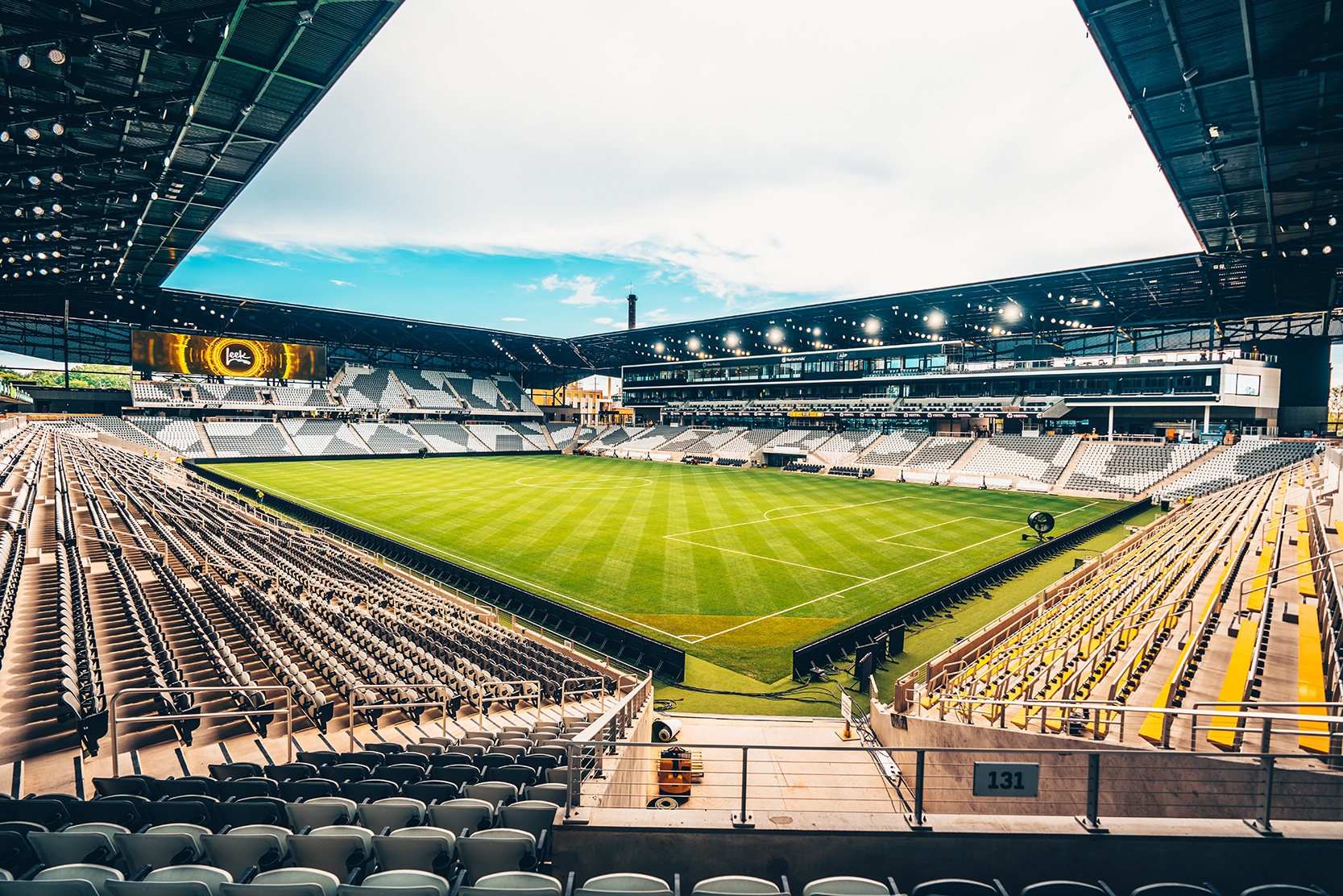 The Columbus Crew of MLS will play its first game at $314 million Lower.com Field on Saturday. (Colin Peterman)

The transaction kept the Crew in town after Anthony Precourt, the team’s previous owner, was prepared to move the club to Austin, Texas. Lawsuits ensued. Ultimately, MLS awarded Precourt an expansion team in Austin that opened Q2 Stadium on June 16.

“What we wanted to do,” Prado said, “given that Columbus had the league’s first soccer-specific stadium, was make everything better — seats closer to the pitch, the bowl a little steeper, better premium, better viewing from the concourse, better integration with the city and a more iconic architectural look, especially with the roof canopy.”

MLS sticks out from the standpoint that no other sport in North America gets more input from its fan base on venue design. In Columbus, through a series of town hall meetings with the Nordecke, the Crew’s supporters group from day one, they didn’t look to the old stadium as a model to emulate, Prado said.

“Most comments were ‘This is what we’d love to see and do better,’ and that’s what we reacted to,” he said.

“Aspirationally, as an architect, we wanted this to be the best stadium in MLS, influenced and driven by ownership and the fans and not a designer acting in a vacuum trying to do cool architecture. That was never our goal.”

The Haslams’ input came after visiting several MLS and NFL stadiums to find out what other teams did right and wrong with their buildings.

In MLS alone, Lower.com Field took inspiration from Banc of California Stadium, Allianz Field, Children’s Mercy Park and Audi Field to get ideas for premium seats and beer gardens, as well as the basics such as concourse width.

From her experience with FirstEnergy Stadium, the Browns’ home, Dee Haslam recognizes those public walkways can be an issue. There are pinch points along the main concourse of the football stadium, and things back up at one gate as fans enter the facility, Haslam said.

“You learn about those things really quickly,” she said. “Getting into the stadium and the convenience of that and making that process seamless is important. If it’s difficult getting into the match, it’s not a pleasurable experience.”

It’s a pet peeve for Prado as well and a key design element that is often overlooked. As a result, Lower.com Field’s main concourse runs 5 square feet per person, exceeding MLS recommendations.

The feeling of having enough elbow room starts on the south side of the stadium, where Prado said up to 70% of fans are expected to enter through the southeast and southwest gates.

They walk up a series of short staircases through a 6,200-square-foot plaza before encountering the Crew House Pub, a 300-capacity sports bar and grill, and then into the main concourse with views to the city.

The team store also sits along that path of travel.

“You go from street level to upstairs and it’s almost like ascending into a church; it’s that arrival moment,” Prado said. “As an architect, we want every space the fan touches to be well done, but a lot of fans will gravitate to the south end because it’s more generous in size.”

The Nordecke is situated along the stadium’s north end. The 3,356-space supporters section is among the biggest in MLS. Those rooters have their own beer garden, which has views to the pitch.

At the old stadium, the supporters took up the entire north end until a permanent stage was added, relegating them to the northeast corner, where they lost some of that intimidation factor, Prado said. During the town halls, they made their collective voice heard — the desire to form a wall of sound from corner to corner on the north end.

Mathias, an interior designer and project consultant, did work for the Haslams at the headquarters of Pilot Flying J, the Knoxville, Tennessee, company owned by the family that runs truck stops across the country.

The Crew developed their own spin on the bunker suite concept: The Lower.com Lounge along the east sideline encompasses 10 suites.

They’re designed with essentially three spaces: a “living room” equipped with a fireplace, a communal club with a central bar, and seats on the pitch to watch the match. The team did not make suite pricing available.

Other premium seating includes 24 suites on the suite level and 158 ledge seats, which hang over the lower bowl on the west side. The latter carried price tags of $6,000 a seat for the season and have sold out, according to the stadium website.

The black roof canopy is a departure from the newer MLS stadiums, most of which are brighter colors, some white, and others with LED lighting systems. Many of them look the same with their curves and swoopy shapes as part of what’s called parametric design, Prado said.

“Dee had been chatting with (MLS Commissioner) Don Garber and he spoke of iconic stadiums and looking forward to Columbus being done,” he said. “We talked about what the word ‘iconic’ means and decided to explore something different that hasn’t been done before in MLS.”

HNTB officials describes the roof design as the “speed scheme” due to its tilt and sense of movement.

“We took inspiration from the black and gold of the original Columbus Crew and there was 100% consensus on the colors,” Prado said. “They loved the concept, signifying progressive movement forward, bold with sharp lines and edges.”

In general, it’s a progressive movement for the future of pro soccer’s second generation of venues in Columbus.

“The project turned out much better than we could have possibly imagined,” Dee Haslam said. “We worked hard to get the look and feel right. To open a new stadium is a great unifier for the community. That’s why we’re so committed to sports. It’s not the easiest business in the world, but we really enjoy watching how it brings everybody together.”