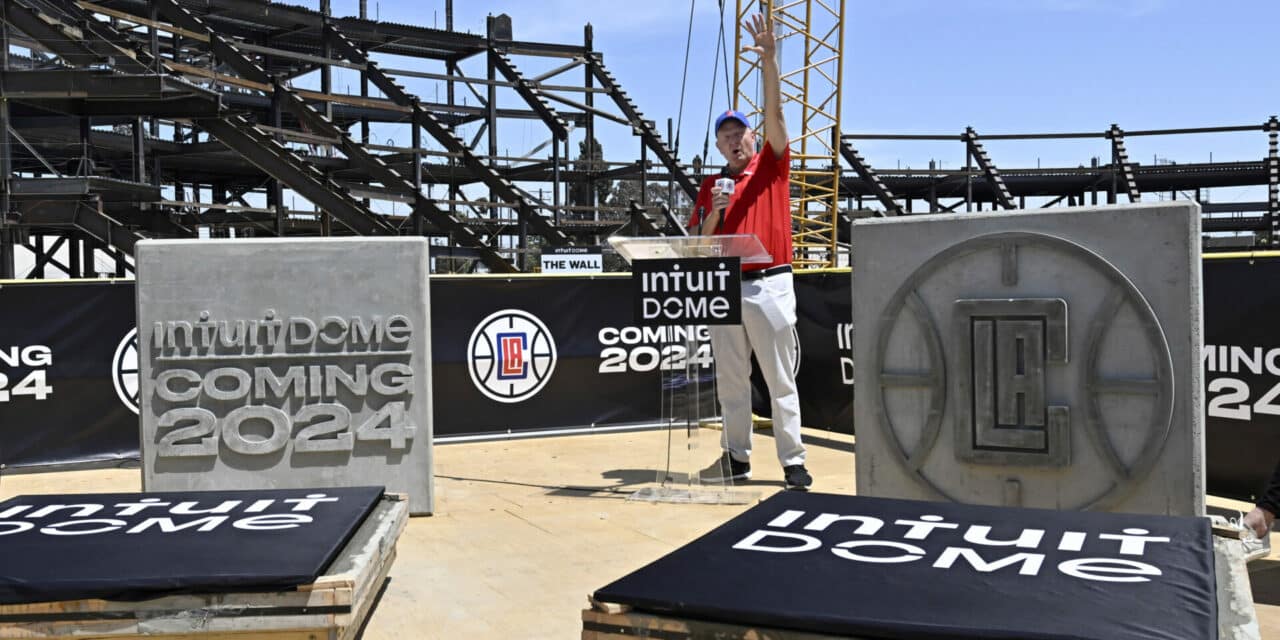 “Technology could mean taking some stuff away.” — George Hanna

AUSTIN, Texas — George Hanna remembers his first conversation with Steve Ballmer. It did not go as well as Hanna intended.

The discussion took place shortly after Ballmer, owner of the NBA Los Angeles Clippers and co-founder of Microsoft, hired Hanna in June 2021 to serve as the team’s chief technology and digital officer. It’s a key position in the development of the Intuit Dome, the Clippers’ $2 billion arena set to open in 2024. Hanna came from Disneyland, where he spent four years as as vice president of technology and digital.

“Steve wanted an example of how we use technology to help solve a problem in the venue,” Hanna said during “Next Think: Big Ideas in Venue Technology,” a panel discussion last week at the 2022 VenuesNow Conference. “I gave him one, which I thought was phenomenal. He thought it was garbage and that’s how (our relationship) started.”

Ballmer’s point to Hanna was that he didn’t want technology just because it’s available; he prefers tech be used to help enable the fan experience. Ballmer, known for his boisterous antics sitting courtside at Clippers games, is driving a simple theme for the new arena: he wants the team’s hardcore fans getting to their seats early to cheer for the club. It’s not about augmented reality, for example, where fans hold up their cell phones and see a big bouncing ball on the court, Hanna said.

“That’s cool, but that’s not what we want,” he said. “We want you in your seat with the phone in your pocket, watching the game.”

Dallas Mavericks owner Mark Cuban, another billionaire who made his fortune in the technology space, said the same thing a few years ago about fans attending NBA games at American Airlines Center. In both cases, it may be too much to ask of today’s younger generation that lives by their mobile devices, but the Clippers plan to do all they can to reinforce their view of fan behavior. 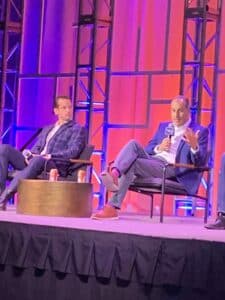 INTUIT-IVE: George Hanna, right, talks about arena technology at the VenuesNow Conference. With him is moderator Thomas Alomes. (Don Muret/Staff)

“We’re toeing the line between what fans have come to want and expect with their device and being able to pull it up,” Hanna said. “It’s our desire that you don’t want to leave the moment. We need home court advantage and that means people are there cheering for the team, wearing the colors and going bananas and your face is not (buried) in your phone.”

As part of that philosophy, Clippers fans should not expect game action to be shown on television monitors on the concourses when they head to the concession stands and restrooms. When the ball is in play at the Intuit Dome, different content will be shown on those screens, Hanna said. In that respect, it runs counter to the concept of keeping fans connected to the game when they take those breaks.

That’s OK, according to Hanna.

“We’ve got the greatest LED screens, but technology doesn’t mean show the best picture whenever you can; it could mean taking some stuff away to incentivize the behavior we want,” he said.

Biometrics, a technology finally gaining traction at arenas and stadiums through systems such as Amazon’s Just Walk Out markets, is something the Clippers plan to adopt at the Intuit Dome. Hanna said it’s all about gaining the fans’ trust that the team will use the data in the right way and keep it secure without selling it to the highest bidder.

Fans will have the right to opt in to the technology or decline it. Overall, the technology is driven by teams’ need to better identify all customers attending events at their facilities. As it stands now, they don’t know about 70% of the people that walk into their venues, which surprised Hanna considering Disneyland has used fingerprint scanning identification since 2013.

“We’re going down that path; maybe it’s (identifying) your face, elbow or shoe,” he said. “It will allow you to pre-enroll to sign up for biometrics and you only have to do it once. We want you to give us, through that technology, your payment method so you can go into a frictionless store (for example) and give us age verification so you can buy alcohol. If you’re willing to do that before you arrive, you may never have to take your phone out of your pocket to do anything at the venue the entire time. You’re doing everything from getting through parking to security and buying food and retail.”

“Putting it all together, we believe biometrics is a big part of enabling that experience,” he said.

In addition, the Clippers are developing a mobile application exclusively for Intuit Dome employees with a suite of tools tied to ticketing, concessions and suite access, among other arena operations systems.

Those devices will have the ability to upgrade seats or, for example, provide a parent with a coupon equipped with a QR code to get their child a free T-shirt from the team store in the event the adult spilled beer on it, Hanna said.

“It’s something Disney does,” he said. “With a push of the button, we’re empowering the employees, putting something in their hands to make something right if it was wrong or potentially sell you something,” he said. “That’s only possible if all the things we’ve been talking about (with connectivity) are there and brought together.”