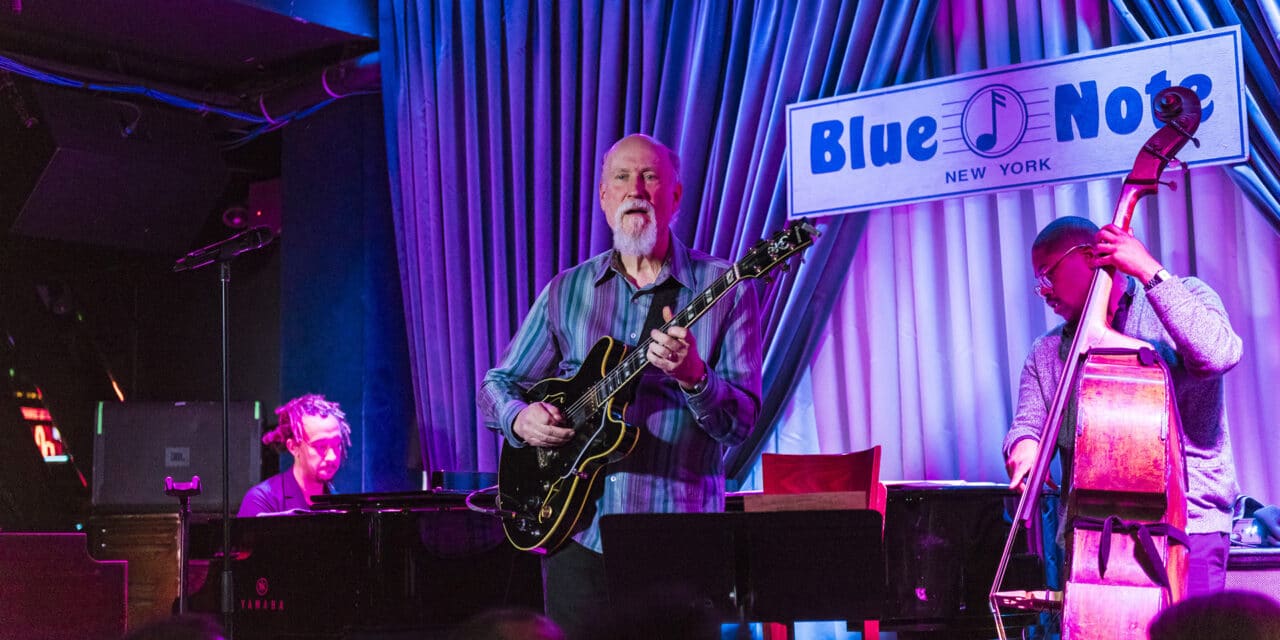 IT’S SCO TIME: John Scofield, set to perform July 8-11 at the Blue Note Jazz Festival, plays with his Combo 66 band at the club in 2018. (Getty Images)

For some, the return of fans to Madison Square Garden for New York Knicks games marked the proper return of live entertainment in New York City, once the epicenter of the coronavirus pandemic. For others, that comeback may be signified by the reopening of a venue 30 blocks downtown, with less than 1% of the vaunted arena’s capacity.

“If the Blue Note’s opening, then maybe that means that there’s some light at the end of the tunnel overall, in terms of culture,” said Alex Kurland, director of programming at Blue Note New York, which was set to reopen its doors with 13 Robert Glasper shows June 15-20.

The reopening follows months of hardship for the Blue Note, which livestreamed performances early in the pandemic and staged a smattering of shows in late 2020 when New York City briefly allowed venues to operate as restaurants with “incidental” live music. But the timing couldn’t be better.

The moving target of public health restrictions in New York, which fully reopened in May, presented challenges when booking the Blue Note’s summer calendar, so — unlike some other New York venues — the club will return at partial capacity with temperature checks, mask requirements when not seated, and plexiglass dividers between parties. The club’s planned capacity for its reopening, 130 of its typical 200, is actually twice the 60-person capacity the Blue Note team had thought would be necessary when it began plotting its June return in March.

“We were willing to make it work at 60 seats,” says Blue Note Entertainment Group President Steven Bensusan. “I’m hoping to ease into that 100% (capacity) over the course of the summer and into September.”

Regardless of capacity, the Blue Note was able to leverage its reputation as a jazz mecca to book a sterling lineup once it decided an early summer reopening would be feasible. Bensusan and Kurland contacted Blue Note regulars like Glasper as well as a slew of booking agencies to share that the club was once again open for business.

One key part of the pitch? Underplays, which provide a way to ease back into performing for artists who “may not be in a position to take on larger-capacity venues because of comfort level,” Kurland said.

The festival followed its tested booking strategy, which incorporates genres outside of what Bensusan described as “straight-ahead jazz,” including R&B, funk, and hip-hop. At its inaugural 2011 event, Bensusan recalled, Blue Note hosted iconic cool jazz pianist Dave Brubeck and, days later, staged a show with The Roots featuring Rakim, who played the seminal 1987 Eric B. & Rakim album “Paid In Full” in its entirety.

Uptown, Blue Note will continue to build on its long-running partnership with SummerStage, even if the series is welcoming back 1,100 fans in a podded format rather than 5,000 for general admission shows.

“George Clinton, at a scaled-down capacity, is going to be extraordinary,” Kurland said. “There’s gonna be an energy there that everyone’s gonna appreciate, similar to the type of appreciation you may feel at the Blue Note, with that kind of intimacy.”

Globally, Blue Note Entertainment Group is also restarting its engine even if, as Bensusan noted with a laugh, “we seem to have clubs where the pandemic hit the hardest,” considering its establishments in Milan, Tokyo and Rio de Janeiro. The company has its eyes on expansion in Europe, specifically London and Paris, and domestic locations in Honolulu and Napa, California, have resumed business, including the latter’s partnership with Another Planet Entertainment at the 5,000-capacity Oxbow River Stage in Napa. (“It’s a fun project for us,” said Bensusan of the Napa series, which will present shows by artists from Death Cab for Cutie to Herbie Hancock.)

But, for now, it’s all about the company’s New York City flagship.

With this year’s Blue Note Jazz Festival, “we tried to really cover all the genres that we present at our venues,” Bensusan said. “I think we did a good representation of that this year, even though it was hard to find a lot of artists because of the situation. We just wanted to get the Blue Note open and celebrate the 10th year of the festival and have that momentum and show people that we can do this and we’re coming back.”