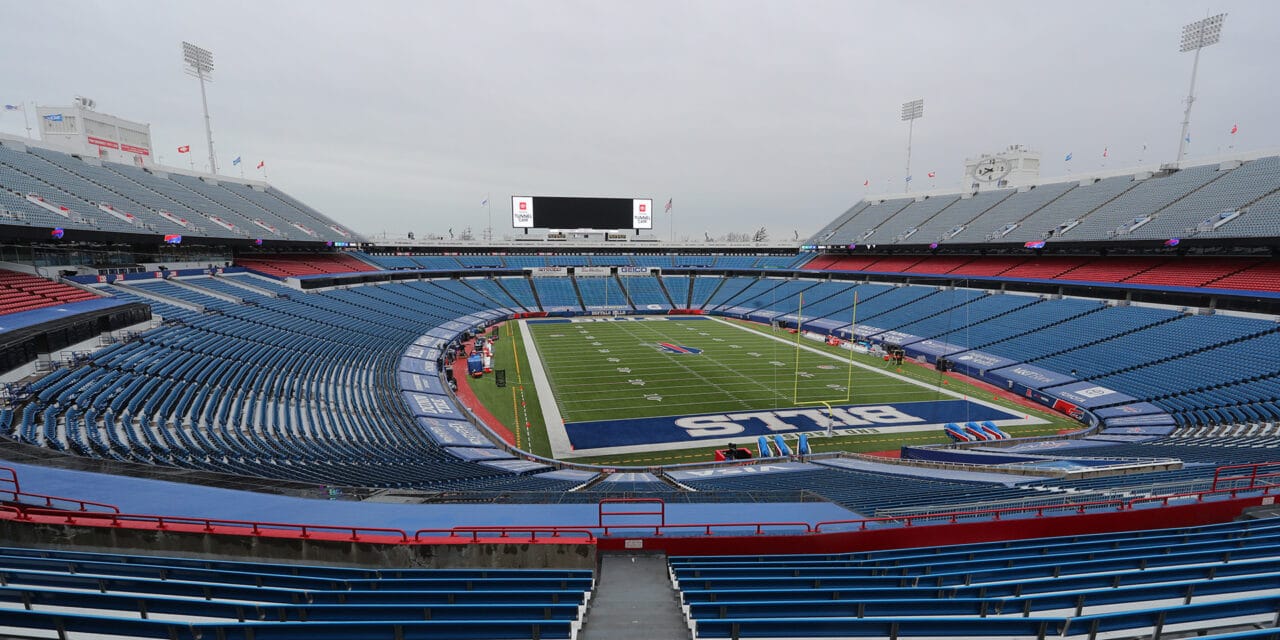 The Bills are considering replacing Highmark Stadium near Buffalo, which opened in 1973 and is among the oldest NFL stadiums. (Getty Images)

Jerry Jones’ reach in NFL stadium development has expanded to Buffalo and the D.C. Beltway.

Legends Global Sales, the sports agency co-owned by Jones’ Dallas Cowboys, has been selected to sell sponsorships and premium seats for prospective new venues for the Buffalo Bills and the Washington Football Team, according to industry sources.

In addition, the Bills have selected Legends Global Planning as owner’s representative in their effort to build a new stadium, sources said.

Ron Raccuia, executive vice president for Pegula Sports and Entertainment, the team’s parent company, and who is leading the project, did not return emails for comment.

Chad Estis, Legends executive vice president, did not return an email for comment on the stadium developments.

In addition to Jones, the New York Yankees and investment firm Sixth Street are Legends co-owners.

it’s unclear whether the agreements with Legends will extend to Legends Hospitality running the food service in Buffalo and Washington.

The two teams’ decision to go with Legends Global Sales comes after the agency had tremendous success marketing SoFi Stadium and Allegiant Stadium, two multibillion-dollar facilities that opened in 2020.

Before the pandemic, Legends sold multiyear naming rights deals to both buildings, at a price of $30 million annually for SoFi Stadium, home of the Los Angeles Rams and Chargers, and $20 million a year at Allegiant Stadium. They represent two of the NFL’s biggest deals.

Legends also sold $549 million in personal seat licenses for Allegiant Stadium, home of the Las Vegas Raiders. PSL sales totals for SoFi Stadium have not been made publicly available.

The Allegiant Stadium total is higher than the reported $530 million in PSL sales for Levi’s Stadium, home of the San Francisco 49ers. Legends sold premium seats for the 49ers.

Legends Global Sales was born out of the Cowboys’ sales staff at AT&T Stadium, which opened in 2009, where they generated $600 million in PSL revenue.

The stadium leases for both the Bills and Washington are scheduled to expire over the next six years, which would free them to move to new facilities.

In Buffalo, the Bills’ lease at Highmark Stadium runs through the 2023 season, local media reported.

Considering it takes three to five years to develop an NFL facility from design to construction, the Bills would need to sign an extension at their current stadium, which opened in 1973 and stands among the league’s oldest venues.

On May 25, the Bills released a statement on Twitter that said: “Representatives from Pegula Sports met (that day) with officials from New York State and Erie County at Highmark Stadium, the team’s current venue in Orchard Park. The objective was to outline a plan based on the independent study the organization conducted with regard to future stadium and arena projects in western New York.”

The feasibility study, launched three years ago, was completed by CAA Icon and Populous, which designed major renovations to the current stadium over the past decade.

The study was updated to reflect the economic challenges due to the pandemic, The Associated Press reported. The results of the study have not been made public.

Financing a new stadium will be a heavy lift in one of the NFL’s smallest markets.

As owner’s representative, Legends’ role is to serve the best interests of the Bills, owned by husband and wife Terry and Kim Pegula, to ensure a new stadium is built on time and on budget.

In that role, consultants work closely with architects on design. At the construction site, they communicate daily with general contractors in part to help resolve potential issues with the building process.

The Bills favor a new stadium over a more extensive makeover of Highmark Stadium.

Seven years ago, the 71,000-seat venue received $130 million in upgrades. The cost was shared among the Bills, Erie County and the state of New York. The improvements covered concessions and restrooms, wider entry gates, a new team store, the creation of a new west end plaza and expansion of the team’s training facility.

Health care insurance firm Highmark took over the stadium’s naming rights in March. The building was known as Bills Stadium for the 2020 season after Buffalo-based New Era Cap Co. pulled out of its seven-year deal two years before it expired.

Before that, it was Ralph Wilson Stadium, named for the Bills’ original owner.

The building opened in 1973 as Rich Stadium, named for a food products company as part of one of the early venue naming rights deals in sports. The name remained until 1998, when the stadium was named for Ralph Wilson.

The Washington Football Team has a little more leeway. Its lease at FedEx Field runs through the 2027 season.

Dan Snyder, the team’s owner, was recently seen touring SoFi Stadium with Jason Wright and Charlie Thornton, CAA Icon’s co-CEO. Washington has played at FedEx Field since it opened in 1997.