Leiweke: Good Times Ahead, ‘and You’ve All Earned It’ 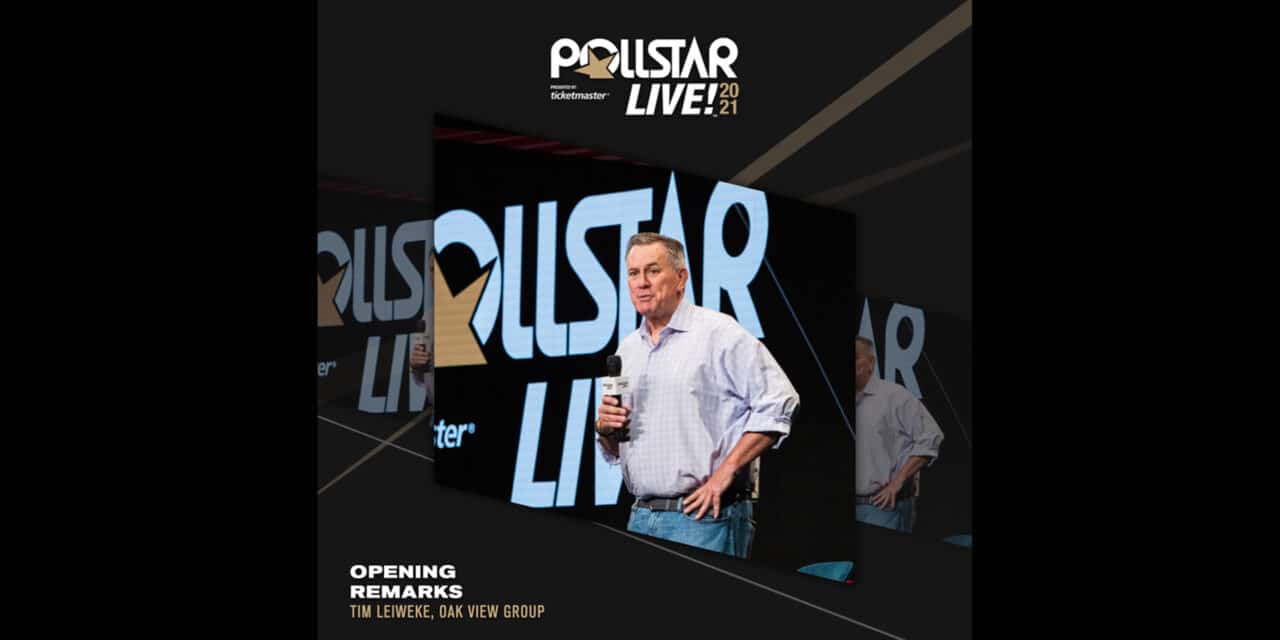 Oak View Group CEO and co-founder Tim Leiweke welcomed in-person and virtual attendees to the 2021 version of Pollstar Live! on Wednesday, telling the audience of live entertainment business professionals that the busiest period ever is around the bend for an industry hit as hard as any by the coronavirus pandemic.

“It is good to be together. It is good to be able to, as an industry, gather and begin to talk about positive things: touring and concerts and live,” he said. “When we first announced this earlier in the year, I think people were questioning whether or not we have the ability to all come together. Needless to say, we got a little bit lucky with the timing of the announcement with the state of California (reopening) and were able bump this up. We have almost a thousand people between live and streaming, so (I’m) very grateful to everybody that traveled, everybody that’s here today coming together. I want to thank you all for having faith in the industry and making Pollstar work.” (OVG is also the owner of VenuesNow.)

Last year’s conference took place in February 2020, when the extent of the novel coronavirus’ spread and its devastating global economic and human toll wasn’t yet known, “before all hell broke loose,” Leiweke said.

Considering how many promoters, agents, managers, production people and venue personnel have been affected by the historic shutdown, Leiweke said it has been “disappointing to say the least” that it took as long as it did to get the government’s attention to “rally around us and how slow that support has been,” Leiweke said.

“We probably didn’t get the attention, the support or the understanding that we deserve as to what we have been through this last 16 months,” he said.

Leiweke noted that OVG held fast and did not lay anyone off “because we believe in live.”

“We knew we’d get through this,” he said. “We probably last February didn’t understand it would be 16 months of a journey we all just had to travel, but we’ve gotten through it. I don’t think we’re all the way through the valley yet. I still think we have work, and that’s a lot of what the next two days will be, is trying to not only talk about protocol and how we come out of this together, how we stay together as an industry, but how we ultimately recover.”

“We are blessed that the artists that drive our industry, that are at the center of everything we do, are so keen at getting back on the road and performing live,” he said. “I think there’s never been more pent-up demand. Last year we kept on talking about the Roaring ’20s coming back again. What we clearly see now is that people ultimately appreciate life, and they appreciate the great things in life and in my opinion, they probably appreciate live music more than ever before.

“We are heading into two, three, four years of the maybe the best times in our industry. You’ve all earned it.”

Challenges  — from pockets of coronavirus spread to a logjam of acts rushing back to touring — remain, “but I congratulate the industry for coming together … for surviving … for ultimately trying to make sure we paid attention to one another and picked everybody up,” Leiweke said.

Now it’s time to think about next steps “and how do we do this right,” he said.

“I’m proud that live is back,” Leiweke said. “We may have been the hardest-hit the industry, but we’re going to be the one that everybody rallies around.”